She Loves Me Is A Sweet Confection At The Wick 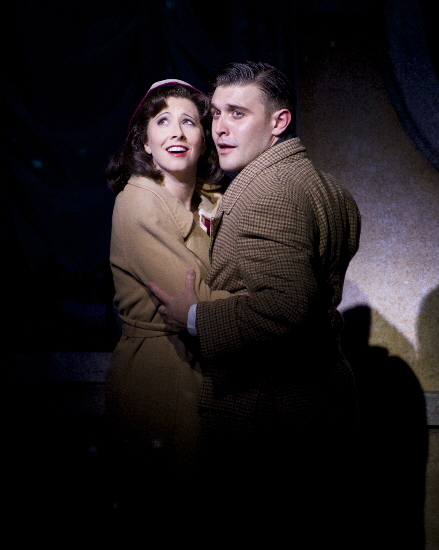 Just in time for the start of the holidays, the Wick Theatre delivers a shiny ornament in the form of the unabashedly romantic musical She Loves Me.

With the warmth of a fireside hearth, the familiar tale of a feuding couple who don’t realize they are soulmate pen pals fairly glows from the stage with an earnest cast including leads with Broadway caliber voices, Julie Kleiner and Matthew Kacergis.

If the production does not quite shine and the energy ebbs occasionally, everyone from director Norb Joerder down to the ensemble invests the evening with the kind of irresistible charm that wins over an audience with sentiment rather than sentimentality. 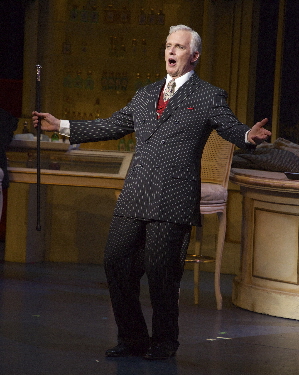 The production is also notable for the performance of Patrick Cassidy as a feckless cad – the role that won his father Jack the Tony Award in 1964. Further, the score was adapted and orchestrated for two pianos by veteran Florida musical director Michael Larsen who died a few days before rehearsals began. The production is dedicated to his memory.

The plot set in 1934 Budapest centers on employees of Maraczek’s Parfumerie, especially the genial if awkward assistant manager Georg Nowack. The owner hires Amalia Balash, a nervous but determined woman who used to clerk at a defunct competitor. The two instantly rub each other the wrong way, but their unassuming older co-worker Ladislav Sipos tells delivery boy Arpad Laszlo that underneath their bickering, they are attracted to each other.

In fact, unknown to either, they have been corresponding for some time anonymously through letters set up by a lonely hearts newspaper column. Each “dear friend” has grown deeply in love with the other even though they have never met or seen each other.

Also working at the store are the aforementioned lothario Steven Kodaly who is romancing another clerk Ilona Ritter, a lovely woman unlucky in love to date. Complicating matters, Maraczek suspects one of his employees is having an affair with his wife. And it swirls on from there.

The 1963 Broadway run only lasted 300 performances. But with the aid of an original cast recording featuring Barbara Cook’s legendary rendition of “Vanilla Ice Cream,” She Loves Me settled into the pantheon of cult musicals adored by generations of theater aficionados. It has been revived several times, most recently in a 2016 Roundabout production in New York that was broadcast a few months ago on PBS. A staple of community theater, it was produced last season by Pembroke Pines Theatre of Performing Arts.

The script by Joe Masteroff (Cabaret), the lyrics by Sheldon Harnick and music by Jerry Bock (who jointly wrote Fiorello and Fiddler on the Roof) are considered quiet gems that are more complex than they appear.

The source material was a 1937 play Parfumerie by Hungarian playwright Miklós László. That was the basis of the 1940 James Stewart-Ernst Lubitsch film The Shop Around the Corner and the 1949 Judy Garland–Van Johnson musical version In the Good Old Summertime. In 1998, the basics were reused in the Tom Hanks–Meg Ryan film You’ve Got Mail. 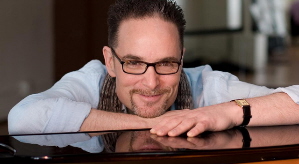 According to Joerder, Bock and Harnick asked Larsen years ago to adapt and orchestrate the piece for two pianos, but the intended theater for that production went out of business before he could finish it. Later, the Wick decided to mount She Loves Me and a friend recommended Larsen and his score. Larsen was set to be musical director when he died October 26. Colleagues Eric Alsford and Michael Friedman stepped in to mold the musical performances, tweak the score during rehearsals and then play the music during the production, each visible on one side at the back of the set.

Larsen’s adaptation embraces full-throated romanticism, using the second keyboard to add depth, texture and a bit of playful twinkle to the sound. The loss of a full orchestra usually employed here allows the audience to savor the quality of the full rich voices that Joerder hired and it enables patrons to comprehend every syllable of Harnick’s lyrics, which sometimes takes the form of rapid-fire patter. 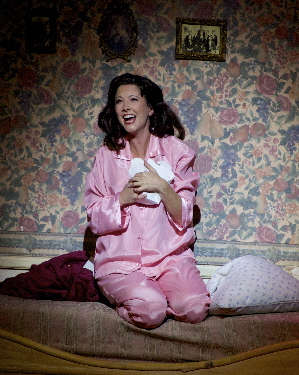 And those voices. South Florida’s Kleiner once again, once again, gives a standout performance both as a comedic actress with heart and one of the best Broadway musical voices in the state. She Love Me asks more of her vocally than other recent roles such as Julie Jordan in Actors Playhouse’s Carousel or her cockney lass in the Maltz Jupiter Theatre’s Me and My Gal. She injects unique twists to her sparring scenes with Georg and she reaches the stratosphere of the lyric soprano range with her joyous rendition of “Ice Cream” and the emotional depths of the heartfelt “Dear Friend.”

Kacergis, a seasoned hand from tours and regional productions, is a handsome if not classically featured young man, but he has a perfect Broadway leading man tenor – a sumptuous, supple instrument that conveys haplessness as well as passion.

Cassidy is an highly experienced Broadway actor (memorably in the revival of 42nd Street) with drop dead looks including silver hair, the definition of dapper in double-breasted suits, plus sparkling eyes and a broad grin that reminds you of his father’s devilish persona.

Lauren Weinberg, who nearly stole the Wick’s production of Guys & Dolls as Miss Adelaide last season, is an adorable Ilona showing off her superb comedic chops and brassy belt.

All four have a talent for caressing the end of a musical line with an aural flip of pure sweetness.

The rest of the cast is fine as well: Barry J. Tarallo as Sipos (quite a change from his butler last month in The Drowsy Chaperone), Paul Carlin as Mr. Maraczek, Tepper Saffren as the eager Arpad, Kevin Robert Kelly as a put upon maitre’d and an ensemble of Dalia Aleman, AJ Cola, Alexandra Frist, Lindsey Johr, Nicole Kinzel, Laura Plyer, Thomas Porat, Brian Reiff and Vince Wingerter.

The period perfect costumes were designed by Jim Buff, the lighting by Emily Beecher McKeever, sound by Justin Thompson, the elegant confectionary scenery rented from the Utah Shakespeare Festival and, as always, superb animated projections by Josieu Jean (someday there will be a Carbonell category for this kind of work).

Hanukkah and Christmas are coming up, but She Loves Me is an early valentine.