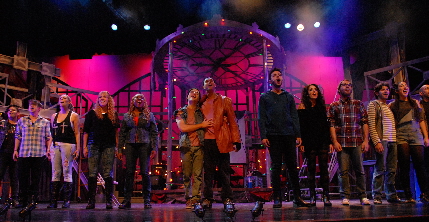 No day but today: The cast of Slow Burn Theatre Company’s Rent / Photo by Gemma Bramham

But when stripped of the aforementioned spectacle, the characters in this Rent, some of them facing death, with others living in the shadows of HIV/AIDs, lack life.

Rent is an ambitious project because of the scope, for sure (large cast, through-sung, which means there is no spoken word, lots of demands from the composer on the actors, the direction and musical direction); it’s a huge undertaking. This is what has put Slow Burn on the map in South Florida theater in its six young seasons of presenting works ranging from Parade to Carrie: The Musical to Chess. They’ve won numerous Carbonell Awards and have now become the resident local theater company at the Broward Center for the Performing Arts starting next season.

And it is Slow Burn’s daring that continues to get them notice. It’s the production values and Patrick Fitzwater’s fresh vision for Rent that keeps this musical afloat and allows for some forgiveness for some of the weaker elements — characters that appear shallower than the stories they are telling, and choreography here and there that seems a bit too difficult for the skill level of some of the players.

When Jonathan Larson’s play opened in 1996, it was compared to the groundbreaking ‘60s rock musical Hair. Rent, which was also suggested to be loosely based on Puccini’s opera La Boheme, was groundbreaking, too, and set the tone for many musicals that are still being created today —musicals that blend pop music and theater music.

The musical is set in a warehouse loft in New York’s Alphabet City inhabited by a group of struggling young artists. The characters are modeled on those in Puccini’s Boheme: Rocker Roger Davis (Bruno Faria) is Rodolfo, the forlorn poet; Marcello, the painter, is Mark Cohen, a documentarian videographer (Mike Westrich); Mimi Marquez (Abby Perkins) is dying due to HIV from drug use — Puccini’s heroine, Mimi, had tuberculosis, the scourge of the early 19th century; Larson’s Mimi now has the death sentence of the ‘90s, HIV.

Westrich, who was so compelling when he starred in Outré Theatre Company’s tick…tick… BOOM! in 2013, Larson’s autobiographical musical written before Rent, seems to have less of a connection with his character of Mark. While Westrich’s vocals — as are all of the vocals in this Rent — are spot on (too bad there were technical problems opening night as his mic cut out a few times), he fails to build Mark’s character to a point where the audience sympathizes when it’s time for him to face an internal battle over selling out for a high-paying video job. He does, however, create one of the highlights of the evening in his duet with Alexander, the show-stopping and comical “Tango: Maureen.”

Faria, a theater student at FAU who starred as Clyde Barrow this season, brings an original flair to the role of rock star Roger. Having seen this character played more than a few times, Faria’s approach is less jaded than actors have chosen to play him in other productions and this works to amp up the likeability factor for this character. Faria is exceptional in his vocals in the solo One Song Glory; his voice displays the true aching of the song. He appears less comfortable in his interaction with love interest Mimi (Perkins). Faria and Perkins together are missing the lustful spark that usually makes this couple absolutely sizzling by the time Act II rolls around.

Perkins fares better in ballads (“Without You” showcases her voice) than the rock songs, especially the difficult “Out Tonight,” which requires the actress playing Mimi to cover the stage in slithering gyrations while growling like the frontwoman of a rock band. Fitzwater used his expertise to give Perkins moves that weren’t too challenging in “Out Tonight.” Still this song never really reached fever pitch heights that the bring-the-house-down number usually achieves.

As the bi-sexual, narcissistic Maureen, Brennan shows off her capabilities with the hilarious performance-art piece “Over the Moon.” When she tells the audience “Moo with me,” there isn’t a bit of hesitation on either’s part. Her duet with the rich voiced Alexander in Act II, “Take Me or Leave Me,” is one of the best displays of vocal talent together and elicited cheers by its final notes from the audience because of its perfection. Alexander as Joanne is just spectacular in every pairing and her vocal precision in the second act opener, “Seasons of Love,” is absolutely impressive.

Another vocal standout with his deep bass voice is Penny as the HIV-positive, philosophical, computer genius Collins. Playing opposite Penny is Vida as the sweet transvestite Angel. Vida seemed to struggle with some of the more intricate moves Fitzwater assigned in Angel’s salsa-inspired solo, “Today 4 U” in the first act. High-platformed boots in the costuming appeared to have contributed to some of the troubles. As Benny, Mark and Roger’s former roommate and now present landlord, Garranchan comes in and out of scenes, but he misses chances to make an impact.

The hard-working ensemble presents a wonderful backdrop. Was it intentional or not that sometimes they appeared like Zombies, which gave them a nihilistic presence? Whether intentional or not, it created atmosphere.

Caryl Fantel leads Rent’s rock band with amazing results. It’s a difficult musical score that Larson foists on musicians and she brings out the best in it with her ensemble, which includes Roy Fantel, Phill Fest, Andrew Gilbert and Al Nigro.

What’s missing from the production is an emotional pull and a reason to care about anyone in this rag-tag assembly of bohemians. Really the standout here is Fitzwater’s vision, which is bigger than this Rent is able to deliver. Perhaps some of the kinks will work out as the run progresses.

Go to Slow Burn’s Rent for the spectacle — including Sean McClelland’s enormous set with its oversized clock hovering above (too bad it isn’t really ticking). Costumes are by Rick Pena and there are plenty of them; lighting is by Lance Blank and sound is courtesy of Pat Ward.