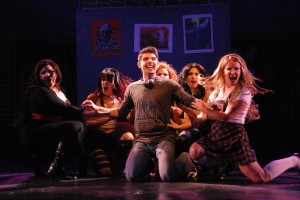 Like a scruffy stray found on the streets with little promise of being housebroken, Slow Burn Theatre Company’s summer musical production of High Fidelity shouldn’t be so appealing and downright winning. But it is.  The sense that the energetic cast and creative team seem to be having this much fun should enchant most anyone open to a summer lark.

Certainly, it has faults including a hazy explanation for how and why its protagonist undergoes an indistinct character evolution. There also were some severe technical and some vocal problems at the first preview we saw Friday, but those likely will work themselves out by the time you read this.

But this goofball romantic comedy radiates such joy that you instantly forgive, even welcome those human moments like flat notes, a prop left offstage, props knocked onto the floor, and really late sound and light cues.

It depicts a young man, adrift in life other than his obsession with rock music, trying to suss out why he can’t maintain a relationship. It speaks directly to a 21st Century audience of Millenials and their younger siblings.

And if you squint your eyes, you may detect the glimmer of a social commentary: Whereas pop culture once was the accompaniment to life in the 1940s, then became the backdrop in the 1960s and 1970s, it has become the actual fabric of life — which may not be a healthy substitute for human interaction.

This 2006 musical is based as much on Nick Hornby’s 1995 novel as the popular 2000 film with John Cusack. The musical folded after only 14 performances on Broadway. But a cast album recorded three weeks after it closed, plus the fame of the film and a growing cult following led to regional productions in several cities.

The creative team has a promising pedigree: a wit-drenched book by David Lindsay-Abaire (Rabbit Hole, Good People and Shrek the Musical), nimble lyrics by up-and-comer Amanda Green and an amazingly eclectic score by Tom Kitt (Next To Normal) that ranges from soul to punk rock.

The show centers on Rob (Robert Johnston) a late 20-something who owns, as the opening song states, “the last real record store on earth.” The store’s denizens perversely revere vintage vinyl and are obsessed with “good” music while despising folks like John Tesh and Celine Dion. Nerds, stoners and misfits all, they are a latter day Peter Pan and the Lost Boys, notably the crass Barry (Sebastian Lombardo) and the introverted Dick (Bruno Vida).

Rob tells us in one of many addresses to the audience that he is in the final throes of a breakup with the lovely Laura (the lovely Nicole Piro) who we see reluctantly leaving the man she loves because, it appears, he is self-centered and cannot commit.

Other than his devotion to music, Rob is aware his life is directionless. He says his collection of classic 45s “is the closest I have come to an actual achievement.” Rob and his friends are inveterate list makers, expanding the idea from the intellectual game of choosing The Five Top Rock Songs About Guitars to listing the very personal My Five Top Relationship Breakups.

Rob may try to express his affection by making mix tapes for Laura, but he seems to always have one foot out the door. His poor track record is exemplified in person by his last five failures portrayed by Courtney Poston, Abby Perkins, Christina Flores, Sandi M. Stock and Kaitlyn O’Neill who back up many of the songs.

The authors’ delightfully wry tone is a bit broader than that of the film. When Rob presses Laura hard to tell him how much of a chance there is of getting back together, she blithely tosses off “Nine percent.” Which leads off to Rob’s jubilantly sings, “I’ve got a nine percent chance of your love.”

But he will have to compete with the attentions of Laura’s new beau, the smarmy New Age guru Ian (Noah Levine) who flaunts that he provided an intervention for Kurt Cobain and who yells out during sex, “Who’s your Ghandi?”

Director/choreographer Patrick Fitzwater’s affection for the show obviously inspired the rest of the Slow Burn team.

Johnston was last seen naked but giving an impressive performance as the unabashedly opportunistic hooker in Zoetic Stage’s Clark Gable Slept Here.
He delivers an appealing and affable fulcrum for the show, a notable achievement since you often want to shake Rob by the shoulders and tell him to get a clue. His singing voice is serviceable if not outstanding, but he never falters inhabiting someone sincerely searching for answers without even knowing the questions.

Piro, memorable as Kate Monster and Lucy The Slut in Slow Burn’s Avenue Q, has a clarion singing voice and a charisma that makes the audience why Rob would ever do anything to mess up their romance. When she appears as a hot fantasy figure in Rob’s dream forcing herself into Rob’s list of five memorable breakups, she scorches the stage with “Number Five With a Bullet.”

The supporting cast has standouts as well. Levine, a stalwart in smaller theaters as well as Slow Burn, is hilarious as someone you want to strangle. He also has one of the strongest voices in the company, investing outsized brio in every number.

O’Neill, another Slow Burn vet, nearly stops the show with her rendition of a folky post-breakup lament “Ready to Settle”  in which she begrudgingly says that settling for a fifth-rate loveless romance is better than, well, it’s better than death.

Larry Buzzeo is both the store’s regular customer known only as TMPMITW (The Most Pathetic Man In The World) and later, in an inspired reversal, Bruce Springsteen himself.

Lombardo throws himself completely into Barry’s self-involved crass attitude. Unfortunately, he is battling the indelible career-making performance of Jack Black in the film. He admirably tries to create a character distinctly different from Black, but you miss the incomparable Jack. In previews, he was missing notes left, right and center.

Again, we stress that we saw the first performance in front of an audience, but the transient technical sound problems made it hard to understand many of Green’s lyrics, which further aggravated Lindsay-Abaire’s sketchy treatment of Rob’s transformation.

As always, Manny Schvartzman, doubling as music director, did a solid job leading the band composed of all Italians: Nick Trotogott, Konstantin Litvinenko, Ivan Prilepchanski, Sandy Poltarack and Rupert Ziawinski. Given that Kitt’s score deftly and intentionally echoes everything from Gladys Knight to Run DMC, their skill effortlessly crossing genres was pretty impressive.

The show is shot through with the obscenities common in today’s discourse, but oddly, the message of hope and the power of love is so mainstream that your grandmother will enjoy the evening.