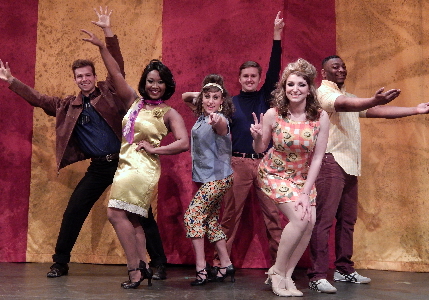 The secret of the improbable success of the’60s musical revue What’s New Pussycat — The Soundtrack of an Era at Broward Stage Door is encapsulated in the second-to-last musical number.

The smooth solid voices of six performers are caressing the first familiar strains of “Moon River” when something happens. The canned background music stops and the singers, sitting on the edge of the stage, launch into a lovely six-part a cappella harmony.

But there are standout moments and they all benefit from the same sensibility envisioned by Michael Leeds and Kevin Black who conceived and directed this show of songs that were part of the fabric of Boomers’ lives.

When Caitie L. Moss throws herself into “You Don’t Have To Say You Love Me,” she delivers paint blistering passion as if she was singing an 11 o’clock power ballad from a Broadway musical, not a plasticized cover of a ‘60s classic.

This is a revival of the production’s premiere at Broward Stage Door in August 2014 with the same creative team but a completely different cast. This troupe is composed of earnest, talented – but less accomplished and convincing — performers. Most have enviable clarion belting voices, but not that extra bit of topspin that experienced singing actors can give, the quality that made the first run such a surprising success.

There’s the puerile “Name Game Song” and the profound “Bridge Over Troubled Water” ending in a lovely harmony. There’s the folky protest song “Eve of Destruction” given a surprisingly effective rendition of wistful rue rather than anger by Jay Wilkinson. There’s The Beatles, Burt Bacharach, Simon and Garfunkle.

There’s a run of songs tied to dance crazes like The Twist and The Locomotion. Another set focuses on film themes like “To Sir With Love,” “Goldfinger,” “Georgy Girl.” Sometimes they mix it up by giving songs to different genders such as “Do You Wanna Dance?”

The staging includes the droll idea of two performers fighting over a microphone during the dispensable “Talk To the Animals” from the film Doctor Doolittle. And it can be a bit indecipherable such as a middle-class couple who seem to be tourists lost somewhere in “California Dreamin’”

In the original production populated totally by Caucasians, it was a little weird hearing a bunch of white people singing Motown songs by the Supremes, Smokey Robinson and Martha and the Vandellas complete with the classic choreography. This time, the production includes Jessica Bennett and Brandon Godfrey, African-Americans who carry these songs off with a bit more authenticity.

The performers wisely never try to imitate the sound of the original singers, so when Godfrey croons “Georgia On My Mind,” he honors Ray Charles’ phrasing but isn’t trying to duplicate his inimitable sound.

The vocal arrangements (some by musical director Eric Alsford) also distance the show from the originals by allowing the singers to take the melody lines somewhere other than originally penned. This is a little disorienting at times, but it also reinforces a commitment to keep the material fresh. The only time this doesn’t work – and does this ever fall on its face — is on Country Joe and the Fish’s “Feel Like I’m Fixin’ To Die Rag” with every single note of the original melody (such as it is) gone AWOL.

Much of it is played straight, although a few numbers in the second half are meant to be a bit of a hoot such as Preston Grover singing “Mrs. Robinson” to a projected photo slide show of an unlikely choice for an older sex symbol.

Stage Door has hired strong voices: three of them Godfrey, Grover and Wilkinson just left this stage a few weeks ago where they were performing in another jukebox revue Pompadour. All six have their moments, but Wilkinson has a gorgeous tenor, a glowing Pepsodent smile and a squeaky clean charisma that stands out,

But under Alsford’s baton, the singers never sound less than first-rate, especially in the interweaving chorale numbers like the “Moon River” number or Caitie Moss and Dana Reminsky on “A House Is Not a Home.”