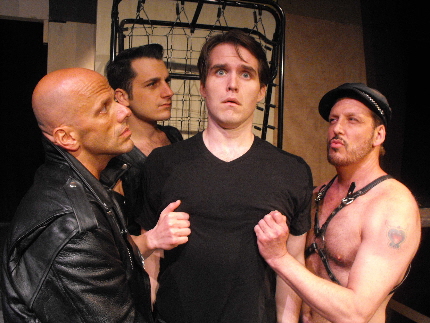 It’s weird but wonderful that two full decades after the height of the AIDS crisis that Paul Rudnick’s touching but hilarious satire Jeffrey now revived at Miami Beach Stage Door Theatre feels a bit like a period piece.

You feel guilty for feeling that way; it feels unfaithful to the memory of loved ones who died and those who struggled to survive. But thank God and science and humanity’s capacity to prevail that the 1993 play’s premise of a gay man who swears off sex seems from another era, although the pain is still fresh today to those who lived through it. But marriage equality is the issue today not survival.

The reason Jeffrey still works, Rudnick’s uninhibited wicked wit aside, is that the underlying themes are universal and timeless: the overriding importance of pursuing and savoring love despite the risk of loss, something that director Dan Kelley and his cast embrace fearlessly.

Any script by Rudnick is reason enough to recommend a visit and Kelley’s cast of chameleons playing multiple parts does well by both the comedy and the drama. But time has undercut the urgency and pungency that the proximity of the plague imbued it with, extra frissons of gallows humor and compassion. The last local production I recall, at the Off Broadway Theatre in Wilton Manors in 1994, felt funnier and more wrenching. (FYI: Kelley was in that cast.)

This wry, tongue in cheek fantasy centers on the genial title character (Clay Cartland), an unemployed actor in Manhattan who resolves to give up sex in the wake of the epidemic even though he glories in coupling – 5,000 times, he claims. But these were about sensual pleasure; he never mentions any emotional component.

No sooner does he make this vow than he meets Steve (Daniel Rosenstrauch), a warm-hearted and hot-bodied bartender who wants a real relationship. Jeffrey is attracted until Steve reveals that he has been HIV positive for five years. Jeffrey slams on the brakes to the dismay of his best friends, interior decorator Sterling (Kelley) and Stirling’s love, the good-hearted but dim dancer in Cats, Darius (Frank Vomero) who is also battling AIDS.

Jeffrey comically travels through a Wonderland odyssey of gay and straight characters, all intentionally made cartoonish, as he tries to find a substitute for sex, even though his real problem is the fear of loss. How stereotypical are they? How out there? Larry Buzzeo plays a priest who Jeffrey consults. The showtune-addicted cleric grabs Jeffrey’s butt while they kneel to pray. When Jeffrey expresses amazement, the priest says, “I’m a Catholic priest; that’s somewhere between a chorus boy and a florist.” But on balance, it’s the priest who offers Jeffrey the most helpful insight to his dilemma.

The rest of the cast make up a gallery of bizarre encounters, from Shane R. Tanner’s six-foot-plus “pre-operative lesbian,” to Niki Fridh’s useless self-help guru, to Randy Charleville’s leather-clad denizen.

Kelley smoothly negotiates the transformation from the hilarious to the heartfelt by adjusting the amount of those two yin-and-yang elements in the mix. Both are always present. Still, he gets Rudnick’s groove from the moment we see a potential sex partner for Jeffrey swathed in Saran Wrap, wearing rubber gloves and covered by a surgical mask.

But it’s leavened with earnest and incisively-observed lines such as when Jeffrey struggles with Steve’s offer of a date: “Why does a simple dinner feel like a game of Russian roulette?” or “I’m sorry life is suddenly radioactive.”

Crucial to the production’s success is Cartland’s central performance. He exudes such an affable Tom Hanks kind of vibe that we can nearly forgive Jeffrey’s brusquely stiff-arming Steve’s open-hearted advances. Cartland has a wonderful stiletto twist with a dry line of humor, but it’s his quiet but intense anxiety that gives the play its emotional heart.

Rosenstrauch is also solid as the impossibly patient Steve, as is the entire cast playing multiple parts.

But the pleasure is watching Kelley as Sterling. Anyone who has seen theater in South Florida for any period of time knows Kelley’s extensive experience as a director of knockabout farces for Stage Door’s parent operation in Coral Springs and his own talent for broad performances such as Pseudolus in A Funny Thing Happened On The Way To The Forum.  So it’s notable that while Kelley is terribly funny here, he never relies on vaudevillian shtick or over-the-top camping. His Sterling is real and relatable, and undeniably poignant in his sadness at the end of the play.

A nod is due Cindy Pearce for designing and choosing an endless array of costumes that the ensemble keeps slipping into as they morph from character to character.

For fear of overstating its virtues, this is not the finest production of Jeffrey you’ll paste in your memory book. It isn’t as side-splitting or compelling as it can be. Or is the accurate phrase not “as it can be” so much as “as it has been”? If that’s the case, it’s a small price to pay. And it’s still worth a look.