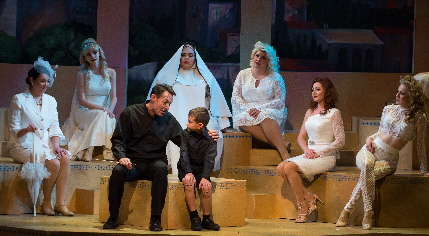 At the risk of sounding paternalistic or snide, which is not the intent, the quality of work at Broward Stage Door has been inching up noticeably over the past few seasons.

But every couple of years, this home of jukebox revues and modest comedies for an undemanding condo audience just nails a book musical that would challenge any company. It did it a year ago with Evita in a trend whose honor roll includes The Light in the Piazza and A Little Night Music.

Now, it adds another point of pride in its almost 25-year-history, Nine, the 1982 Tony winner scripted by Mario Fratti and Arthur Kopit, and initially proposed by composer Maury Yeston.

Based on Fellini’s classic film 8 ½, Nine follows the frantic efforts of famed Italian film director Guido Contini trying to resurrect his failing career by retreating to a Venetian spa to try to jumpstart his stalled creative juices. But the charismatic man-boy Contini is a world-class womanizer whose lengthy parade of past and current women in his life including his wife show up in person or via invasive memories.

Other than Contini’s vision of his nine-year-old alter ego (and his friends), all of the diverse characters populating the spa and his reveries are women, ranging from the memory of his mother to his supportive wife to his current mistress to the actress who has been his muse to the ghost of the hooker who introduced him to sex when he was nine.

Like the hero in Sunday in the Park With George, Guido is seemingly obsessed with his art to the unaware exclusion of a mutual nurturing relationship. His artistic compulsion and his unbridled sexual adventures are obstacles he has unconsciously put in his way to keep from dealing with his inability to risk giving himself completely to someone.

Time and space vanish as Guido muses on this array of women who are present like a Greek chorus for most of the evening.

When he desperately seizes on making an autobiographical movie musical Casanova, he thoughtlessly cannibalizes the intimate secrets of his wife, mistress and leading lady – hurting each badly enough that they abandon him.

Eventually, his love ‘em and leave ‘em past catches up with him as he approaches his 50th birthday, so that he must come to terms with his irresponsible behavior that has kept him from fully participating in a real relationship.

Throughout, Yeston and Kopit explore issues such as the interplay and conflicts among religion, sex and artistic creation, each equally unfulfilling by themselves in the final analysis.

Stage Door’s strength is the cast that director Peter J. Loewy has gathered. Most of the 18 adults and six children have appeared before at Stage Door and/or in the choruses of other local companies. But whether it’s the material inspiring them or the leadership of Loewy and musical director David Nagy, many of these actors are gifting the audience with their best work, better than some of them have given in other productions.

The linchpin is Paul O’Donnell as the flamboyant Guido who must exude charm that seduces you into sort-of excusing behavior that leaves a wide swath of emotional damage. But there is something just a shade smarmy about O’Donnell’s Guido. On one hand, you realize that he is a slave to his libido; on the other, his irresponsibility grows less and less forgivable (especially to an enlightened 21st Century sensibility). O’Donnell and Loewy get away with it because Guido is agonizing about what he is doing as he lies, cheats and betrays the three women he actually loves.

O’Donnell’s career began locally, then he performed for years in Vegas and has spent the last 3 ½ years behind the scenes at Stage Door as its stage manager, technical director and operations manager. Back on the boards, he creates the larger-than-life genius whose gesticulating arms are always outstretched like the floor show emcee of his own life. Ironically, he appeared in neither of this year’s Danny Kaye bio-musicals, yet that is precisely who he reminds you of: The expansive physical movements of a Vegas circus ringmaster and a quicksilver face that can flit from an orgasmic savoring of an undulating body to an insincere expression of contrition when he’s caught at it.

Some awards competitions would likely consider the rest of the cast an ensemble, but that would be wrong. Several women create vibrant, fully-realized individuals from Guido’s present and past. Almost all of them have gorgeous bittersweet nectar voices brimming with a meld of adoration and regret.

Top of the list is Elizabeth Sackett who has done laudable work in the past for Stage Door, but here truly shines as Guido’s wife, Luisa, who must struggle with her  profound love while perfectly aware that he is betraying her at all times with one or more dalliances. But Sackett’s Luisa is not a doormat; indeed, she has more integrity, strength, compassion and character than anyone else in the evening. The poignancy that Sackett creates in Luisa’s lament “My Husband Makes Movies” is heartbreaking.

But we could wax for pages about the pure voice of Dalia Aleman as Guido’s mother in her number “Nine” or Victoria Lauzun’s sad assessment as Guido’s muse in “Unusual Way.”  Ellie Patterson nearly stops the show as the film producer who demonstrates her former life as a Folies Bergere star or Kat Gold as the fleshy but exuberant prostitute who leads the cast in the tarantella “Be Italian.” Alexandra Milbrath scores as the sensual mistress du jour who cavorts in “A Call From The Vatican.”

Also providing distractions of various stripes are Rebeca Diaz as Mama Maddelena, Alexandra Garcia as the spa owner and Emily Freeman as the producer’s aide, a former acerbic film critic.

Filling out the stage as chorus, spa patrons and others in Guido’s life are Hilleah Neve Caputo, Melody Lieberman. Stephanny Noria, Caterina Randazzo, Sandi Stock, Alexandra Van Hasselt, Lara Williams, and as schoolchildren Jacob Harris, Sebastian Fahnestock, Lily Trier and Emma Trier, with Jack Rodman and Giustino Garcia alternating as the young Guido. It’s true, some voices were not as accomplished or strong as others, but everyone was energetic and involved.

Nagy’s skill at bringing out the best in these singers cannot be underestimated nor Loewy’s staging. But also give considerable credit to the full, rich sound of Manny Schvartzman’s full-throated digital tracks. Michael McClain’s set design of sun-kissed steps and platforms under the arches of a hillside spa against a scenic vista provides Loewy infinite opportunities for varied stage pictures.

Nine, with its adult themes and frank sexual choreography, once again shows Stage Door gently pushing at the hide-bound expectations of its audience. The result deserves significant applause.