Success Of Primal Forces’ New ‘An Accident’ Is No Accident 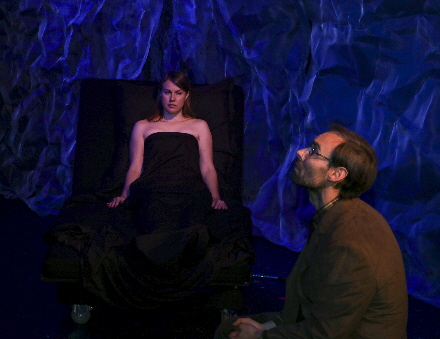 The woman run over in an auto accident may be the only one on stage struggling with severe physical injuries. But both she and the driver desperately need curing of equally crippling psychological and spiritual wounds in An Accident, a sensitively acted and directed drama from Primal Forces.

Libby, who initially is paralyzed in a hospital bed, and Anton, the emotionally cauterized driver who gingerly visits her almost daily, begin a strange pas de deux of mutual healing in Lydia Stryk’s insightful script given life by director Keith Garsson, and actors Elizabeth Price and Nicholas Wilder.

Both parties emerge from the months-long recovery forever changed, maybe even for the better. But their journey is not some uplifting movie-of-the-week paean to human resilience so much as a cool-eyed examination of how we deal with personal tragedy. It does not end with everyone walking into the sunset hand-in-hand.

Stryk’s script is solid enough upon reading and features some lyrical affecting speeches. But the intriguing premise is elevated into memorable theater by local artists creating quirky, complex yet realistic characters and a prickly uncomfortable milieu for an audience poised virtually on top of the actors in the livingroom-sized Empire Stage in Fort Lauderdale.

Reading the script shows what Price, Wilder and especially Garsson have infused into the final product. For instance, the script has us meet Libby lying immobile in bed and talking aloud. But Garsson has the bed turned away from us and Libby standing next to it, examining her unseen prone body as if she was a stranger. Her Libby addresses both us and the paralyzed Libby as a narrator. It immediately establishes the disconnect between an active incisive mind at work and the inert body housing it.

The feisty Libby, who has amnesia, possesses a sardonic, cynical mien plus a talent for clothing anger and fear with savagely cutting black humor. On the day of the accident, she had been jogging through a supermarket parking lot as Anton was backing his car out. Now she can speak, but little else.

To her own surprise and Anton’s, he comes to her bedside regularly. Early on, she angrily dismisses him with a perfunctory grant of forgiveness. But something keeps him coming back; indeed, it’s never quite clear why from Stryk’s script.

Anton is a quiet tweedy history teacher who likely lived a tamped down life long before this, only becoming animated when talking about the Civil War.

The ensuing symbiosis contains several surprises – nothing is a simple as it seems — as the two strengthen a bond virtually against their will. Libby’s facile intellect and resentful fury take full advantage of her moral high ground and Anton’s reticence to torture him like a psychological Torquemada. She knows the guilt-ridden Anton can’t really fight back against her skewers. It’s a brilliant choice by everyone involved that the audience begins to feel sorry for Anton and not so sympathetic toward Libby. But then Price/Libby allows us to see under her acerbic taunts for glimpses of the pain and terror.

It’s not a spoiler that over time the ever-closer interaction somehow aids Libby’s slow limb-by-limb recovery. The scenes in which she discovers the re-animation of her arms or legs is a masterpiece of acting and direction by Price and Garsson.

Wilder and Price work smoothly together portraying two people who reach out then slap away a hand. They appeared together in Reborning at Arts Garage, the strange play about a woman making realistic infant dolls for grieving parents.

Wilder’s role is tough because his mousy character often seems so stereotyped, but he gives it dimension by injecting it with pure emotion that makes his Anton credible, especially the few times he lets loose with emotion.

But this is Price’s triumph. Her Libby is like an emotional tuning fork with razor sharp edges vibrating wildly so that anyone who comes close will be slashed to bits. She becomes someone who doggedly refuses to let outsiders see the true depth of the abyssal fear and anger. Only her monologues reveal the terror in the sleepless wee hours and then her transcendent release at the sight of dawn, taking full reign over some of Stryk’s most evocative and affecting writing.

Doubtless, Price could call on some of the memories of her own recovery from a real life accident last year. But her faultless intense inhabiting of this multi-leveled character is no surprise to anyone following her wide range of work in recent years, from the doctor in The Normal Heart to the saucy maid in Twelfth Night to the troubled sister in This Random World and, indirectly, her direction in the recent Straight White Men. In much of her work, her characters may have varied exteriors, but they share a secret sadness along with innate intelligence.

The evening owes much to Garsson’s direction of the performances in addition to his pacing, his willingness to let a scene go silent and his vision adding grace notes to the script. For instance, when Libby is about to leave the hospital, Garsson has her awkwardly put running shoes on her bare feet. When Libby’s internal consciousness is mobile, he has Price physicalize the outrage and frustration at her body’s limitations.

It’s a work solidly in the wheelhouse of Primal Forces, a tiny company that has moved from venue to venue for four years, currently working out of Empire Stage’s digs in Fort Lauderdale, and soon to settle down next season at Sol Theatre in Boca Raton. With a small-budget, it specializes in intimate relationship plays with a handful of characters – usually in little known plays by playwrights you’ve likely never heard of. But most of the works directed by founders Garsson or Genie Croft are thought-provoking intriguing outings.

Even with its modest budgets, Primal Forces makes the most of design elements. Here, Bombshell Productions lines the tiny playing area with crumpled featherweight paper so the action seems to take place inside Libby’s brain. Alberto Arroyo’s costumes establish character, Nate Sykes’ lighting with perhaps a score of elements bathes scenes with differing emotional subtexts, and David Hart’s sound design includes music with scurrying circles of notes during scene changes that underscore the intricate wheels within wheels spinning on stage.