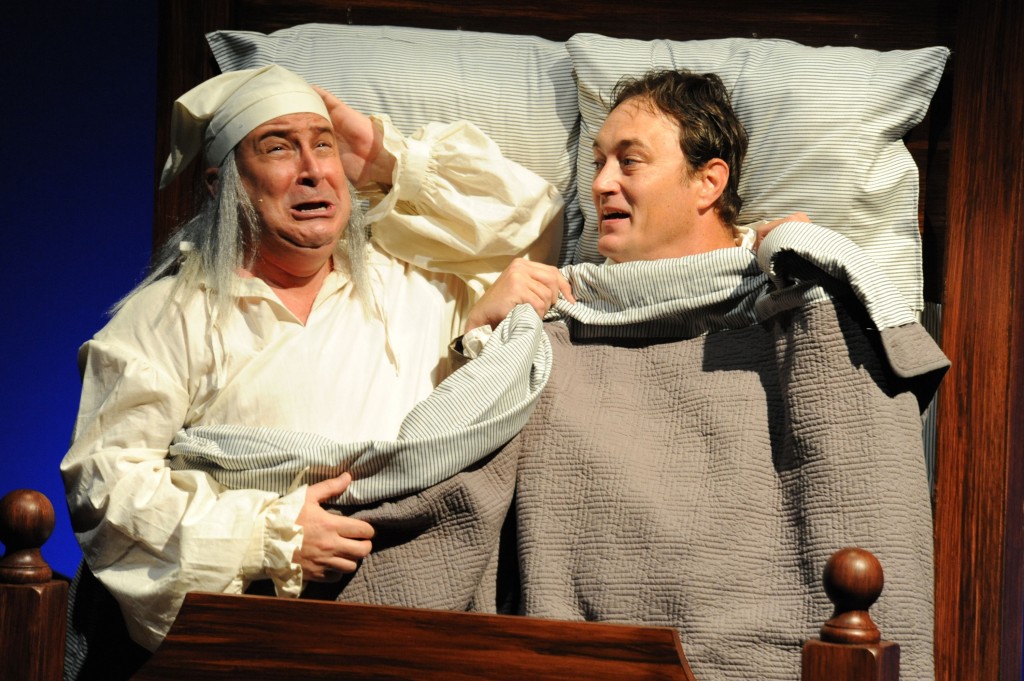 City Theatre’s annual rite of the season Summer Shorts has developed a well-earned reputation for being the dictionary definition of “uneven.” So it’s a relief that this 17th edition is the most consistently funny and entertaining in quite some time.

Some of the nine playlets still are markedly more hilarious than others, some are tight little gems of farce leavened with a bit of seriousness, some still meander before solidifying at the end. One doesn’t quite work. But the year-long effort by Producing Artistic Director John Manzelli to identify promising works has paid off in a uniformly better crop of scripts this year, none of the what-were-they-thinking entries that often marred the menu of Shorts in the past.

As usual, most have a racy irreverent flavor, such as the nerd who can give intense sexual pleasure with a twitch of his pelvis. All are rooted in the comic efforts of human beings trying to connect with each other, such as the widower who allows his fiancée to watch him talk to his deceased wife in the graveyard.

Even when the scripts aren’t as strong as you’d hope, the directors and cast deliver them with enough punch, passion and craft that they are still diverting.

Manzelli directs one play and turns the others over to Margaret M. Ledford, one of the best freelance directors in the region, and Mark Swaner,  a director/playwright/actor who cut his teeth in Miami and then pursued a career in Chicago and Los Angeles.

They are blessed with a solid if smaller troupe of chameleons disguised as actors, a phrase that seems mandatory to use every year because it’s so accurate: the droll Steve Trovillion in his 16th season, Elizabeth Dimon in her seventh, Irene Adjan doing a third tour of duty, local veteran Todd Allen Durkin fresh off Mosaic’s harrowing A Measure of Cruelty and newcomer Katherine Wright.

The Audition Play opening the evening, penned by famed playwright Israel Horovitz, features a tap-dancer (Adjan) trying to persuade a director (Durkin) that she “really needs this job” even though he’s justifiably suspicious of her resume. Their back-and-forth verbal banter continues while the dancer just keeps hoofing as if stopping will cost her the role.

Bedfellows by Adam Paltzman is one of the less impressive scripts, positing that an uptight John Adams (Durkin) is forced to spend the night at an inn and share a narrow bed with the ebullient Benjamin Franklin. The sage’s incessant references to his accomplishments increasingly irritate  the heck out of Adams. This is where Swaner’s direction and the actors’ brio make the escalating Oscar-and-Felix frustration enough to carry the slight skit. Trovillion makes you smile when Franklin, oblivious to his braggadocio, throws open a window on the cold night air and says, “I could write a poem – or create a social institution.” 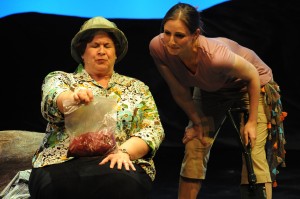 Moscow by Lojo Simon is a gentler comedy in which Wright portrays a modern young woman living in the wilds of Idaho. She has brought her Jewish mother from Palm Beach to a mountainside to witness a risible ritual to celebrate the birth of her daughter. Amid their kvetching, the two illustrate the depth of their bond and affection.

The Man From Mars by local playwright Christopher Demos Brown was a popular entry in draft form at last fall’s 24-Hour Theatre Project and was an unqualified hit in a staged reading of some Shorts candidates a few months ago. But this time, directed by Swaner, the story of a nerd (Trovillion) who can send others into paroxysms of pleasure but not pleasure himself wasn’t half as funny as it had been in earlier incarnations.

Kerri-Anne Lavin’s The Britneys, directed by Manzelli, featured the three women in the cast at a dysfunctional book club in which Dimon’s liquor-lubricated doyenne throws the debate off the rails by making every discussion about her personal problems. While the piece is not a laugh riot, Lavin demonstrated a facility for witty dialogue, such as dissing the term “chick-lit.” One character says she hates the phrase: “These are empowering tales about women, not tiny pieces of gum.”

Intentionally quirky rather than knee-slapping funny, Three by Gregory Bonsignore is a quiet smile of a vignette in which a widower (Trovillion) brings his fiancée (Adjan) to watch his regular visit to a graveyard where he sits on the grass to speak to his wife. Directed again by Swaner, Trovillion abandons his broad comedy turns to deliver a completely credible portrait of a man whose gently-nurtured grief comforts him.

Joyce Turiskylie’s I’ll Be There is hands down the funniest piece of the night, focusing on a pathologically shy suitor (Trovillion) who raises the stalking of a previous date (Dimon) way, way beyond a level that could be labeled obsession. Rather than being creepy, Trovillion makes the man so endearing in his adoration that the extreme depth of his devotion begins to win over Dimon.

Green Dot Day by Carey Crim features Adjan and Durkin desperately trying to get in the mood to make a baby, a very unspontaneous night complete with disgusting sperm-enhancing cocktails as the culmination of seven months of careful planning.

The last skit, Reality Show, written and directed by Swaner, is the most off the wall piece, in which a lecturer (Durkin) savages demeaning TV shows by analyzing their five basic facets (including humiliation and inappropriate fits of rage) and then illustrating them himself with the help of a vacuum cleaner and a noxious mixture of mayonnaise and water. It’s humorous but also very sloppy, including an audience participation text message component that didn’t work and ended the evening on a weird weak note.

What the entire evening will remind Boomers of is the old, old Saturday Night Live. Remember when it was usually really funny, when skits had a comic structure, when the actors weren’t reading off cue cards, and even when a skit didn’t quite work, it was inventive and entertaining?

Summer Shorts will not play at the Broward Center for the Performing Arts. The Arsht Center, which is hosting the show in its Carnival Studio Theater has the exclusive rights as the “presenting” producer.

Summer Shorts is one of four events that City Theatre is sponsoring this summer.

City Theatre is joining forces with the Orlando Repertory Company to produce a show for children, The Brand New Kid, a musical adapted by Michael Friedman and Melanie Marnich from Katie Couric’s book “about being different and overcoming teasing through the power of friendship and acceptance.”  The show will play at the Arsht Center  June 9-17, move to the Kravis Center in West Palm Beach June 19-22, then to the Fort Lauderdale Children’s Theatre June 29-30, and play at Orlando Rep July 19-29.

Second, Standing On Ceremony is a series of short plays about gay marriage slated for June 21-24 at the Broward Center, featuring headliners Bruce Vilanch and Bryan Batt (Mad Men), and with scripts written by such luminaries as Paul Rudnick (Jeffrey).

Third, City Theatre is joining with the Knight Foundation to host a symposium for professional, student, fledgling and mid-career playwrights called CityWrights from June 14-17 at the EPIC Hotel in Miami. A large list of workshops, lectures, readings and other programs include advice from master playwrights Christopher Durang and Leslie Ayvazian. Also present will be agents, publishers and artistic directors. Among the events, City Theatre will announce the winner of its National Award for Short Playwriting contest; the finalists include the aforementioned Green Dot Day, I’ll Be There and Moscow. For more information, call (305) 755-9401  or email citywrights@citytheatre.com. There is a fee ranging between $250 and $325, but some scholarships are available.