Posted on December 7, 2014 by Bill Hirschman 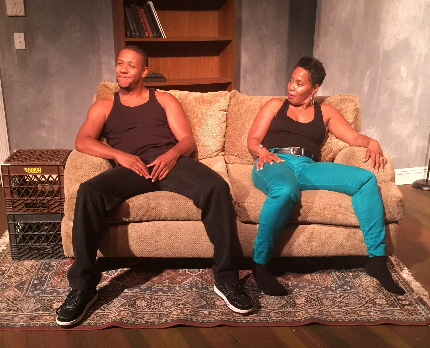 This month is probably the busiest all season with ten professional productions opening in the next few days. There will be new stories every day, sometimes more than one. To find reviews of all the current productions, click on the “Reviews” tab in white letters in the teal bar in the upper left-hand corner

A ‘60s radical talking to her dismissive daughter decades later: “You’ve no idea of the country we almost made for you. The fact that I think it’s all a crock now does not take away from what we almost achieved.”
.                   —Lanford Wilson’s The Fifth of July

One joy of this job is dashing out of a theater, breaking the speed limit to get to a keyboard and then get to tell hundreds of people about a great piece of unsung, unexpected theater that they might otherwise miss.

More than a dozen shows are on the boards right this minute and a lot of holiday/family demands are battling for space on your calendar. But shoehorn in Primal Force’s stunning production of a scorching play few have heard of, Sunset Baby, by a playwright few have heard of, Dominique Morisseau.

This scalding play partly about the fragility of dreams examines the imperfect multi-faceted legacy of idealistic black revolutionaries in the 1970s and the cold hard world that their pragmatic children are trying to survive today. More, it is about what those children will do with that legacy.

Sunset Baby is part dysfunctional family drama, part life on mean streets, part history lesson, part sociological tract, and all first-rate drama written, directed and acted with a fiercely consuming fire. Audiences with different backgrounds may uncover different themes including the feasibility and nature of forgiveness in the face of betrayal and human frailty.

Certainly, Sunset Baby is not a perfect play nor a perfect production, but it’s as bracing and stimulating as much of anything we’ve seen this season.

The driving pace and nuanced leadership is the best work we can recall from director Keith Garsson, and it gives meaty complex characters to veteran actor John Archie as a worn-out grizzled revolutionary and the always superb Ethan Henry as a drug dealer and violent street thief, both men with dreams of a better life.

But the headline is reserved for the ferocious, mercurial, sexy multi-layered creation of Makeba Pace as Archie’s profoundly estranged daughter and Henry’s girlfriend-and-partner in crime. Her Nina has constructed seemingly impenetrable armor that protects deep hurts she can catalogue all too well and needs she cannot acknowledge even to herself. Morisseau has the intelligent Nina verbally careen through emotions and ideas like quicksilver and the actress keeps perfect pace with the demands. She gives a bravura performance that has to be seen to be appreciated.

Morisseau’s set up focuses on Nina who dresses like a hooker to lure victims into dark New York City alleys or hallways where long-time lover Damon robs them at gunpoint. They see themselves as ultra-pragmatic survivors, referring to themselves as a latter day Bonnie and Clyde who also sell drugs on the side. But they are trying to save enough money to leave this increasingly no-win situation in favor of a variety of pipe dream futures. Nina fantasizes about moving to locations like the London she has seen on the Travel Channel. Unrealistically, all they want before stepping away is to accumulate $10,000 in cash.

As tough as this couple sounds, they seem deeply in love; their emotional need for each other borders on physiological. But conversely, they don’t trust each other completely – and both of them know it — because life has betrayed them often enough.

The plot revolves around the recent death of Nina’s mother known as Ashanti X. Once a famous firebrand radical of the black power movement, she was gutted by the desertion of her husband, fellow revolutionary Kenyatta, and the disintegration of the movement. She descended into a life as a crack addict.

But while Kenyatta was in prison on a stabbing beef, she wrote him a raft of letters that were never delivered or received (that’s not clear) and which inexplicably became known to the public. Now with her death, publishers, historians and collectors are vying to buy the letters that Ashanti X willed to Nina. This could be the financial escape hatch that the couple needs, but Nina is loath to part with the only physical connection she has left to a mother with whom she had an unresolved love-hate relationship.

And as the play begins, out of nowhere emerges Kenyatta, who disconnected from the family and virtually disappeared decades ago. For reasons he does not spell out, he wants the letters too.

A swirling dance of shaky and imperfect relationships ensues, powered by baggage and betrayals. These people ask why they are so dead inside when, in fact, they are roiling in emotional agony. They are locked in with inner demons they can’t identify for themselves, let alone expiate.

Baby Boomers will be intrigued by this examination of how activists’ sociopolitical dreams fared, what their legacy was, what their offspring did or did not derive from it. No one is spared Morisseau’s X-ray vision. For instance, she asks whether Kenyatta sacrificed his family life to the revolution primarily because he was afraid of the emotional commitment to people rather than ideas.

The Detroit-raised playwright premiered the play in London in 2012 and then off-Broadway a little more than a year ago. When you stumble over a writer of such power and skill as Morisseau, you have to wonder why you’ve never heard of her. She’s young but has quite an award-winning output (See http://www.larktheatre.org/meet-dominique-morisseau/). We can only hope to hear a lot more from her.

Her script is dense with ideas, eloquent in its language and frequently requires actors to have their characters credibly make hairpin turns, all of which these actors and director handle deftly.

It’s difficult to relate just how smoothly Morisseau creates authentic-sounding street vernacular peppered with profuse profanity and then fuses it with the poetry of yearning, wounded souls. The result is an artificial alloy that she makes sound as natural as if you’re eavesdropping on the argument coming through the paper-thin walls of the crash pad apartment next door.

It helps here that the words are coming from the mouths of these three actors who spit, coo and scream this verbiage with plausibility and passion. Henry, who was simply brilliant in M Ensemble’s little seen King Hedley II in 2012, is especially skilled creating this innately intelligent and highly verbose hustler whose never-explained past encompasses sophisticated book-learning as well as street smarts.

Archie once again gives a riff on the persona he has used frequently but which he executes perfectly. In Kenyatta’s videotaped philosophical musings, Archie infuses a profound sadness at a failure to bring about the world he sacrificed much for, especially compared to the world that actually emerged.

Primal Forces Productions is a company founded by Garsson as a creative outlet for challenging work that wouldn’t please the audience at Boca Raton Theatre Guild for which he serves as artistic director. Its first production last March was David Mamet’s two-hander, The Anarchist. Next April, it plans to mount Lanford Wilson’s Redwood Curtain.

Primal Forces has teamed up with Andrews Living Arts for this presentation in ALA’s tiny space that was once a two-bay auto repair garage. So not only is time a factor in getting tickets, space is as well.