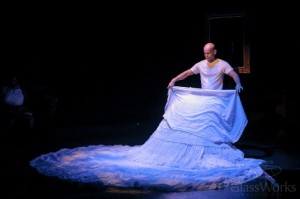 One-person shows are a challenge both to the actor and to the audience, the creation of a multitude of characters by a solo artist and making them distinct enough to matter.

Teo Castellanos’ solo work Third Trinity, a commissioned work by Miami Light Project, is bold in its presentation, mostly because it’s an autobiographical story of Castellanos’ growing up — a story that, when said aloud, is like something out of a movie. Castellanos thought that too.

When the playwright-actor received the commission to create a theater piece for Miami Light Project, it was the jolt he needed to write his story. He also wanted it to be true to the vision he had for this most personal tale in that it would someday be a movie. So he wrote the screenplay and then adapted it to a solo show, turning the 120-page screenplay into a 29-page script. One can imagine that there are a lot more stories in that manuscript than audiences see in the 90-minute solo stage piece.

To tell the autobiographical story as a stage piece, Castellanos created a narrator, a coy, feminine, somewhat gossipy abuela. It’s her job to recount the comings of age of three brothers from Puerto Rico. She’s ghostlike, and in fact, purposely so, as she has died before most of the tales she tells have occurred. (In a question-and-answer session after the performance, Castellanos revealed that he had never met his grandmother, but “had to extract her from three photographs and my DNA.”)

After their mother is murdered in Brooklyn by a crazed junkie, two young boys, Jesus and Larry, are sent to live with their aunt in Puerto Rico, where their cousin Timoteo lives. Castellanos begins the play with the explanation: His mother was told by a santera that she would have three sons, one would be a politician, one would go to jail and one would be an artist. The prediction came true, in one way or another. They eventually move to Miami, where Larry becomes a drug dealer and Timoteo (Teo) becomes a drug addict with aspirations of being an artist. Jesus stays behind and becomes a Puerto Rican nationalist.

The story of Third Trinity plays like a Puerto Rican The Brothers McMullen melded with Good Fellas. It is a maze, a trifecta of drug smuggling, murder, mobsters, religion, and politics. It’s the bad guys in Miami Vice — cigarette boats, tons of pot, wild women and lots of cash. There’s reference in the script about what the sacred trinity is in this story: drugs, money and guns.

Third Trinity spans three decades from the 1960s through the 1980s introducing more than two dozen characters. Castellanos, as the channeler in white pants, a white t-shirt, barefoot and bald, uses a white shawl effectively to signify the abuela’s narration – each time the old woman appears, the shawl is employed – it covers her shoulders, and it flails and flies when she’s doing the dance steps of a meringue. The actor has the most fun with her – she speaks in broken English, sometimes falling back into her native Spanish. Castellanos only glimpses at the brothers, never really spending chunks of time actually playing them, but allowing their stories to be told by the peripheral characters in their lives (it’s a wonderfully subtle technique) – such as a Cuban boat factory owner who is the one that gets Larry into drug dealing; the priest who rescues Jesus from the streets of Puerto Rico, and the various drug dealers that spend time with the addict Teo.

Yet Larry’s and Teo’s drug dealing friends aren’t distinct enough, and the other women are conjured as caricatures. Larry’s wife, Marcia, who breaks the news to her husband that she’s having an affair is cartoonish, and a girlfriend of Jesus’ who waxes poetic on the doctrines of Martin Luther King, Malcolm X and Mahatma Gandhi, is not realistic despite her educated ramblings. This is where Trinity is at its most challenging and is least rewarding.

The remnants of the desire for this to be a film are scattered throughout with cues spoken such as “montage” and “cut.” Every once in a while, the narrator makes reference: “In this movie . . .” she says. To add to the visuals, still photos (some have movement) appear in a large frame upstage – pictures of Carol City High School, an old Ford automobile, a speed boat that trips from Miami to the Bahamas. The soundtrack adds a sensory layer to the story with its mix of salsa, classic rock, and new wave.

Adding yet another element to this growing up story is MacArthur “Genius” Fellowship recipient Tarell Alvin McCraney, who served as dramaturg and director for Trinity. McCraney, called by the L.A. Times “as one of the brightest American playwrights to come along in some time,” grew up in Liberty City, and Castellanos was his first theater teacher. In interviews, McCraney frequently credits the playwright-actor as his mentor. He remains a member of Teo Castellanos/ D Projects Theater Company while building an international reputation. Here, McCraney adds the right touches directorially to Trinity. The scattered stories are brought together with seamless panache with all of the elements in place to create a beautifully curated picture.

If you want to see the makings of a work of art and witness its progress, this is Third Trinity, plus there’s a well-crafted, intriguing story plucked from the pages of real life.

Miami Light Project’s Third Trinity will play 8 p.m. Saturday at The Light Box at Goldman Warehouse, 404 NW 26th St., Miami. $25, $15 for students and seniors; miamilightproject.com or 305-576-4350. (Parking is difficult as it is street, metered parking. Those who buy tickets in advance will get a reminder email about the parking and that the show will start on time. Parking was extremely challenging and despite the warning, the show started 15 minutes late.)