The Children Is Eco-Thriller Told By Masterful Cast And Director 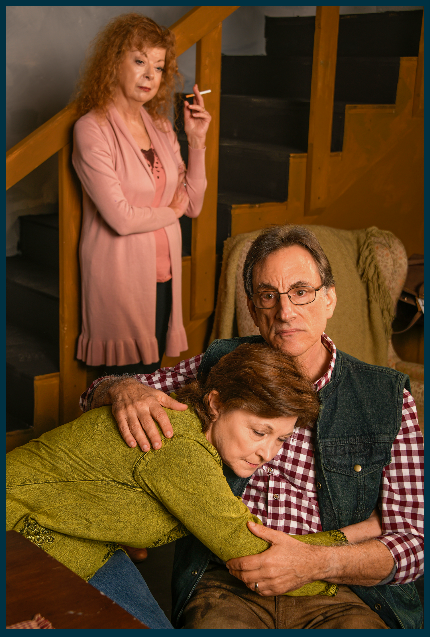 How do you review a play without spoilers when perception-changing revelations occur every few minutes including one halfway through that shoves the play in a 90-degree angle?

You’re just going to have to trust us that GableStage’s production of Lucy Kirkwood’s The Children – eco-thriller, horror story, tale of domestic trouble, and a half dozen other themes – is a stunning experience melding playwriting, direction and acting.

Under Michael Leeds’ guiding vision, master actors Angie Radosh, Laura Turnbull and David Kwiat weren’t giving performances; they were seamlessly inhabiting characters as if they had been living inside them for decades.

From the play’s first moments as two women in their mid-60s have a kitchen table reunion dominated by small talk, a barely detectable frisson vibrates. Beneath the banal proceedings, something is wrong, possibly personal, possibly far more dire than that.

With each increasingly unsettling disclosure repeatedly resetting the audience’s sense of “normal,” it becomes clear that a procession of ever worsening revelations is coming.

We’ll keep spoilers to a minimum, but we’ll unspool a few just to whet your appetite.

Consider the opening scene in a modest cottage in a small town on the English east coast. A salt-of-the-earth housewife Hazel is entertaining Rose, an acquaintance she hasn’t seen in 38 years. They catch up, talking about the retirement of Hazel and her husband Robin. She’s now into yoga and Robin has been hobby farming to Rose’s amazement. Hazel explains, “If you’re not going to grow, don’t live.”

Initially, their small talk might seem blasé and slow to an observer. But there are just the slightest deftest references to something awry in the world outside. There’s no electricity until after 10 p.m. Tap water is not safe to drink. And Hazel is chirpily burbling away as if everyday banter will keep some undisclosed bogeyman at bay.

These are not proles reminiscing about the good old days. Bit by bit, facts slip out. All three are nuclear physicists who decades earlier helped build and operate a power plant a few miles away. When a freak tsunami hit the coast some time ago, it caused the facility to melt down, irradiated the countryside causing death and destruction to an undisclosed geographical extent. And it is now threatening to contaminate the ocean, forcing young crews to court certain death trying to shut it down.

Just to complicate matters, the three have had complicated personal relationships with each other that puts added stress on their meeting. And Rose is clearly not here to catch up on old times.

With the utmost dexterity, the reality of what is happening outside and what these people’s pasts involve are subtly feathered in by Kirkwood, Leeds and the cast. There’s far more disclosures – and one major bombshell — but giving away anything else will rob the audience’s discoveries.

Kirkwood, a well-known playwright in England, has woven threads that whirl around and through each other. Certainly, there’s a cautionary horror story about the dangers of nuclear energy (The play was partially inspired by the 2011 Fukushima nuclear explosion in Japan.)

But there’s also strings about aging, parenting, the intricacies of marital and extra marital relationships, choices in our lives, dealing with the loss of opportunities as age reduces options, scientists’ responsibility for the fallout of their work, redemption, and an interlocking mosaic about how to create meaningful last acts of one’s life.

There are noble echoes of the unspoken British meme “Be calm and carry on” and, with at least triple meanings, Hazel’s mantra “Leave a place cleaner than you found it.”

Exemplary of this production are the opening scenes as Hazel continues the routine of her homebody life with breakneck chirpy burbling monologues despite our growing realization that the world around her is a nightmare.

The chilling reality of a local apocalypse and a blithe acceptance of it is inherent in scenes such as the ebullient Robin arriving from the farm atop a child’s brightly colored bicycle. He dismounts and, unthinkingly following what is a standard procedure now, passes a Geiger counter over it to gauge how much faster the clicking has become.

The play does go on just a touch long, mostly as the complex relationships are exposed. But there is one gift near the end when the estranged trio gets drawn into a re-bonding trip down memory lane as they lip sync and gyrate with abandon to Sly and the Family Stone’s “Dance to the Music.”

All the revelations compound on each other until the play slides into what initially might have been an unthinkable conclusion, but which now seems the only resolution of this inexorable journey.

Everyone artfully brings this work to life, but a special nod is due Turnbull whose ability to get inside this woman’s life, to communicate an ever-changing array of nuanced emotions would be an astounding master class in acting – if only you could catch the actress doing it. Instead, it’s Hazel up there, not some supremely gifted artist.