The Recommendation Satisfies In Its Subtleties At Ground Up 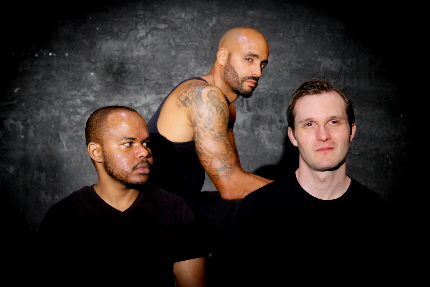 O’Neil Delapenha as Iskinder, Kevin A. Walton as Dwight, and Christian Vandepas as Aaron Feldman in Ground Up & Rising’s The Recommendation

Miami’s Ground Up & Rising production of Jonathan Caren’s The Recommendation is compelling on so many levels. Yet, what makes it so formidable doesn’t have much to do with the actors on stage; it’s more about what happens in between the lines.

Playwright Caren’s engaging script about promises and betrayals, secrets and lies, the privileged and the not-so privileged, and what we all do to get ahead no matter what class structure we’re born into, presents three distinct character studies, yet each serves to mirror desires and defects to one another. Caren’s multi-layered script creates an unraveling that is like a page turner that you won’t want to put down.

Add to this director/producer Arturo Rossi’s vision; he not only digs deep into Caren’s message, but adds his own layer of intrigue through his directing, which brings out the best in a cast that is less than seasoned and then goes a step further by peppering the play with subtleties to make it all the more edgy. What may be overlooked, but shouldn’t be by theatergoers, is Rossi’s sound design — a soundtrack that heightens the tenseness of the atmosphere. (As an aside, I would have loved to have been able to download Rossi’s The Recommendation soundtrack or see it for sale at the back of the house. A fundraising mechanism for the scrappy company perhaps?)

A pair of black and white tennis shoes, hi-tops, sits in front of a black bench. Two black panels are on either side of the minimalist set stage — on each a couple of coat hooks. The starkness of the stage becomes an appropriate backdrop as Caren progressively unravels each character, so that by the end each has shown their true colors and faced their own shortcomings and fears.

The memory play begins with Iskinder “Izzy” Iudoku (O’Neil Delapehna) who is just off to college — Brown University. He wants to be a lawyer, a public defender, to help the less fortunate. His Ethopian father (Kevin Walton, who also plays Dwight) gives him buckets full of life advice. He speaks in fortune cookie sentiments, offering sage wisdom a la Mahatma Ghandi. “Be wary of the man who offers you the world,” says Izzy, repeating one of the nuggets gifted from his dear old Dad.

Soon enough, Izzy meets his roomie, Aaron Feldman (Christian Vandepas), a slick blueblood who doles out favors not to because he’s a nice guy, but because he can. Aforementioned advice fits Aaron to a T. Because of his social status, he’s got the hookups that Izzy could only previously dream of. After the boys graduate from Brown, Aaron, with the help of his father, gets Izzy a spot at UCLA’s law school. Meanwhile, Aaron pursues his career as a filmmaker when he becomes an assistant to a Hollywood movie mogul.

Everything changes when Aaron gets busted for a broken taillight and spends a night in the L.A. County Jail. It’s there he meets Dwight (Walton), who has his own grandiose stories of privilege. Dwayne Wade is his “boy” and so is Steven Spielberg. Dwight’s in the slammer for smashing a gas-station store window with a bottle of Evian water after parking his Bentley out front. Dwight’s got a story for everything.

And, it’s Dwight’s character that becomes a reflection of Aaron and Izzy; Aaron’s arrogance, Izzy’s anger over choices he’s made, and so on and so on.

Delapenha plays Izzy with an earnestness and likeability, but he misses some crucial developments in his character, mostly because he speeds through some of his lines, missing the necessary beats for the audience to wholly take in his internal tug-of-war. In a prison scene, too, where the play calls for the actor who plays Izzy to double as the jailhouse Crackhead, Delapenha depicts him as a cartoonish caricature, which becomes a distraction on stage and throws off the tempo of the play — at least for a little while.

Walton as Dwight is chiseled and tattooed, the perfect physique to play the role of prison champ. And he can pull off that character with a stark believability, but when Dwight is faced with a dramatic turn, Walton struggles to find the right balance of tough-as-nails thug with the vulnerability of a guy who’s just looking to get a second chance.

Vandepas is the standout in the cast, albeit his role is the choicest in the play. His Aaron does the appropriate flip-flop of emotions as he goes from have-it-all rich kid to straight-to-video career flop.

Kudos to the actors and stage manager, Rachel Chin, who remained at the top of their game at the early evening Sunday show of opening weekend despite only a handful of audience members in attendance.

While it would be easy to fall into the cliché of saying Ground Up’s production should be highly recommended, there’s more to this The Recommendation than that. This is not only a show that should be sought out, but also a theater company worth recognizing. With The Recommendation, they’ve taken on a challenging script, added their own artistic touch, and created a winner.

The troupe performs at Artistic Vibes in an industrial warehouse district in Pinecrest. As part of its mission, it also performs free shows at Miami Botanical Gardens after its Artistic Vibes run. In an effort to develop future theatrical going audiences, Ground Up also offers admission at no charge during its paid admission runs for anyone under the age of 25.

Now about that soundtrack. I requested the playlist and created my own mixtape: Electric Feel by MGMT; LPFJ2 by ASAP Rocky; Mr. Intentional by Lauryn Hill; Anyone Who Knows What Love Is (Will Understand) by Irma Thomas; John the Revelator by Depeche Mode; Wolves with Sia, Vic Mensa and Kanye West; I Need by Maverick Sabre.