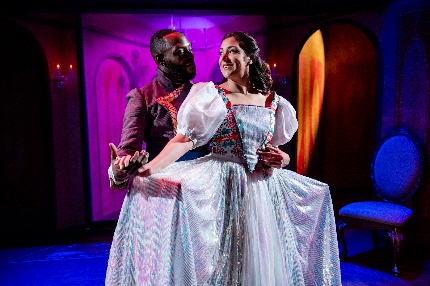 There’s something irresistibly intriguing when the world of whimsical fairy tales is invoked to teach life lessons to adults.

Theatre Lab’s The Glass Piano may have a befuddled king who spouts his own bad poetry, a handsome distant relative of Napoleon come to court to investigate language, a savvy servant who really runs the castle, and a lovely princess who as a child swallowed the titular instrument and now is terrified of it breaking inside her.

But the U.S. premiere of Alix Sobler’s delightfully fanciful and imaginative work is absolutely not a children’s play – although that vibe is intentionally woven throughout the production helmed by Matt Stabile and brought to life by a quartet who immerse themselves completely.

Sobler’s play densely layers metaphor upon metaphor reflecting more complex morals than the Brothers Grimm or Hans Christian Andersen offered. Indeed, the play almost deserves a second viewing to completely suss them out; I can’t pretend to have absorbed them all and cross-referenced them fully on one viewing.

But the underlying tone echoes that almost unique feel of J.M. Barrie’s plays and novels with their barely concealed lessons for grown-ups, tossing in perhaps a bit of Oscar Wildean wit and Jean Giradoux’s fantasies for adults.

Set in Bavaria, King Ludwig (Desmond Gallant) wanders his castle a bit lost, self-centered, lonely, addled and pompous. His primary occupations seem to be making up silly couplets and issuing religious-based proclamations such as outlawing divorce. He believes deeply in the need for inflexible rules. This may explain why his queen has been missing from the castle for many years, spotted on occasion foraging on the grounds and in the town like a feral creature.

His daughter, the equally lonely Alexandra (Diana Garle), has stayed inside the castle since childhood ever since swallowing the piano. Petrified that anything she does could cause the piano to shatter and presumably kill her, she walks, actually sidesteps, through the hallways doing little but somehow composing a concerto on the keyboard inside her.

Their primary – perhaps only — servant – is the wise and amazingly patient Galstina (Irene Adjan), someone from the outside world who has virtually raised Alexandra since the mother disappeared. Capable beyond either of her employers, she keeps the castle running, a difficult task because of Alexandra’s peculiarities.

Upsetting the status quo is Lucien (Jovan Jacobs), a dashing ultra-articulate philologist come to study the ordinary people’s language. His efforts include mentoring a boy who has simply never learned to speak at all.

They all talk to the audience about their fears and hopes as relationships evolve. It’s not much of a spoiler to reveal that the young people fall in love and want to marry, or that the older folks have deep crushes on each other despite the barriers of the caste system.

Among the problems getting in the way, on a macro level, is Ludwig’s inflexibility about rules, as well as profound communication problems hampering anybody connecting with anybody. Via Lucien, Solber sings the praises of words, the building bloc of communication, as a ray of hope. Lucien advocates scrapping the old paradigms that stand in their way and go forward to create a new model for living.

The last few scenes might surprise some people, but they are actually an inevitable culmination, and indeed, only underscore the lessons being taught

Although the quirky characters echo those from a hundred folk tales, Sobler invests them with flaws and complexities more recognizable to adults than children. The lovely Alexandra who we root for through the first act undergoes a personality change for better and worse when Lucien proposes to her. When she discovers that Galstina and her father are on the verge of an affair, she pulls rank, “The bottom line, Galstina, is that some people get to make choices for love. Others have to make choices for duty. A lucky few of us, Lucien and myself included, get to make choices for both. But in the end, love is a luxury that only a few of us get to use as a guiding principal. You are not my mother. You are not the queen. And there are certain duties you simply cannot perform. And there are other duties you simply must.”

We’ll contend that, even with a Carbonell nomination for last year’s The Revolutionists, Stabile may be the most under-appreciated director in the region. He develops a unique vision for each production and then imbues it in every aspect. He is especially effective at bringing his casts together on that wavelength and then keeping them consistently on track no matter how naturalistic or fanciful. Even on that infamously shallow stage, nothing feels static. Working with the input of creative actors, he inserts scores upon scores of inventive grace notes not specified in the script or he has riffed expansively on a stage direction. An instance of the latter, there’s a scene ending moment when everyone strikes increasingly one-upmanship bows and curtsies which is just hilarious.

His troupe of actors never wink at the audience about playing silly characters and flawed ones at that, like in the cartoon Fractured Fairy Tales. Instead, they have mastered the flow of Sobler’s dialogue with a special deftness with comic timing.

For an emerging company with modest resources and that terribly shallow stage, Theatre Lab’s design accomplishments are laudable. Michael McClain – a past master in such cramped quarters — creates a castle, library and garden painted to look like the illustrations in a child’s storybook. But they include imaginative touches such as scrims that are a metaphor in themselves, heightened especially with the help of Jason Tomasheski’s superb lighting effects. A nod as well to Matt Corey for background music and sound effects such as a music box’s tinkling when the princess sits down.

A separate paragraph ought to be devoted to designer Dawn C. Shamburger’s perfect multi-layered costumes which capture the impossibly lush patterned brocade garb of storybook royalty, built by Tim Bowman and Jenna Hoefert. Even the king’s shoes have fanciful embroidered patterns.

Granted, the evening can be a little hard to keep up with as the story turns in on itself in unexpected ways, but The Glass Piano is shot through with tongue-in-cheek charm as well as some object lessons to ponder on the way home.

The Glass Piano runs through March 3 from Theatre Lab is performed at the FAU campus in Boca Raton.  Performance times are 7:30 p.m. Thursday-Saturday, 3 p.m. Sunday and Dec. 18.  Running time is 1 hour 40 minutes including one intermission. Tickets are $32-40. For more information and tickets, log onto https://fauevents.universitytickets.com. Or call (561) 297-6124 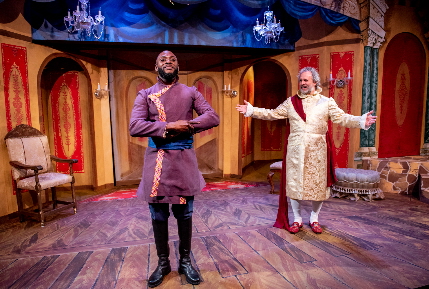