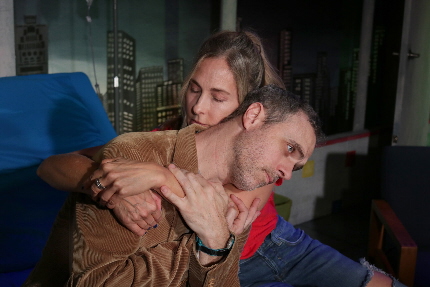 Seth Trucks and Shelley Keelor bond in the hospital room where their mothers are ill in Primal Forces’ A funny Thing Happened…. / Photo by Rick Owen

Laughter and tears, tears and laughter. That combination often gets us through the worst times of our lives. Finding the absurdity and the humor in the saddest of situations sometimes can be better medicine than a doctor’s prescription.

Plenty of laughter, and quite a few tears, punctuate the dramatic comedy, or comic drama, if you prefer in A Funny Thing Happened on the Way to the Gynecologic Oncology Unit at Memorial Sloan Kettering Cancer Center of New York City, receiving an energetic, perceptive production directed by Keith Garsson at Primal Forces in Boca Raton.

As the unwieldly name suggests, humor and cancer are central to Halley Feiffer’s tightly written play that clocks in at just 75 minutes. For simplicity’s sake, let’s just use the abbreviation of A Funny Thing Happened on the Way.

In a way, Karla (Shelley Keelor) and Don (Seth Trucks) meet cute. That is if you think their first encounter in the hospital room of their mothers—both suffering from ovarian cancer—is cute. The two beds are separated by a curtain but Karla is quite loudly practicing her unfiltered, profanity-laced comedy bits about vibrators, rape and wet dreams when Don enters the room. Don is embarrassed and appalled that this unseen woman would try out such an improv routine with such language while their mothers are in a deep sleep after taking massive pain pills. Karla and Don argue through the curtain until they finally come face to face and throw water into each other’s face. Actually, it is kinda cute.

As the months go on, Karla and Don begin to bond in their mothers’ room. A computer app brought Don wealth but he also is separated from his wife, estranged from his teenage son and living in a rental having moved out of his massive apartment. Karla is a struggling comedienne with a past of drug abuse and more than a few issues. Don is uncomfortable with emotion; Karla has too much emotion. Yet, they have a connection that is realistic.

Keelor and Trucks continue their record of being first-rate actors in countless other roles. In A Funny Thing Happened on the Way, they make a believable couple whose chemistry never falters as they draw closer. Keelor eschews her normally glamourous looks for a woman on the edge whose life is being played out in a hospital room—no makeup, sloppy clothes and unkempt hair. Her bold conversation is both funny but also is a cover for the pain she feels especially in her relationship with her mother. Likewise, Trucks who is quite skilled with Shakespeare elicits much sympathy as a man who has gained wealth but lost his family and has watched his mother suffer for seven years.

As their mothers, Jerri Iaia and Linda Bernhard have, shall we say, quieter roles that are pivotal to the story. Though as Karla’s mother, Marcie, Iaia has the showier role.

Primal Forces makes the most of its small stage. Dustin Hamilton’s set design make the audience feel as if they are in a room at Memorial Sloan Kettering Cancer Center with two authentic hospital beds, complete with dinner trays and a handicapped access bathroom that receives a different purpose. Credit also goes to David Hart’s sound, Guy Haubrich’s lighting and Jerry Sturdefant’s costumes.