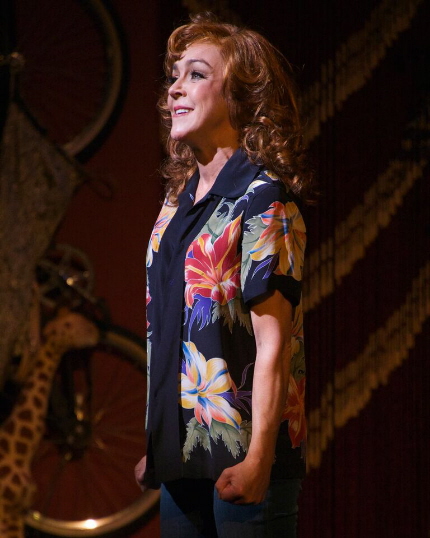 Even in 1978, They’re Playing Our Song felt like a period piece, one of the last dinosaurs that roamed Broadway a decade earlier when a peppy score and witty script were enough to carry a well-constructed musical through a full season or more.

The Wick Theatre is betting, perhaps insightfully, that its older doggedly mainstream audience will be won over by this effectively sweet but decidedly insubstantial romantic comedy – a pleasant diversion.

Two assets rescue the evening. First, there’s a script by Neil Simon at the height of his powers combining character-based humor, snappy rejoinders and some sober observations at how hard it is to maintain a relationship.

Second is the well-honed skill of Broadway veteran Andrea McArdle who knows exactly how to pull off this material both as an actress-comedienne and someone who can wring emotion out of a song.

The tale is more of a play with musical numbers, a good thing since Simon’s script is far more engaging than the score by Marvin Hamlisch and Carole Bayer Sager whose real lives provided the raw material for the musical.

The songs are not poorly-written by any means. But other than the infectious title number and McArdle’s big 11 o’clock torch number “I Still Believe In Love,” the collection of pop songs feels generic; some patrons felt they were so dispensable that they slowed the show down. The tunes are mostly the Chinese food of musical theater; you can’t name one a half-hour later.

The plot throws together the quirky but successful pop composer Vernon Gersh auditioning an even quirkier new young lyricist Sonia Walsk as a possible partner. Vernon is a neurotically buttoned-down yuppie with a carefully-ordered life. He hides behind his piano to avoid interacting meaningfully with people. Sonia is a standard-issue adorably neurotic kook who is perpetually late and cannot disconnect from a former needy boyfriend for whom she feels sorry.

Their ensuing professional relationship turns personal in a rocky romance tested by the conflict of the two facets. As McArdle said of her heroine, “In loving you, I’m losing me.”

The clarion delivery of McArdle and mellow strength of James Clow (Cornelius in the Wick’s Hello, Dolly!) invest this show with much of its attraction. Without that chemistry, the show would be a calorieless husk. While they carry the majority of the show, the script adds a cute element in which each character has a backup group of three singing-dancing voices in their head acting as a kind of Greek chorus.

With that beacon red hair, and flashing eyes, McArdle still exudes the verve that won over a generation of Broadway fans nearly 40 years ago. But she now has decades of hard-earned technique to expertly manipulate a slightly huskier voice which she has rightfully said has “more texture.” The audience feels like they are in good hands any time she steps forward into the spotlight and starts to sing her heart out. The veteran also knows her way around the classic comic timing of Simon’s post-sitcom rhythms.

Clow has a tougher job since Vernon is more of a white bread introvert, but he grows on the audience as Vernon loosens up. His pleasing voice and comic chops succeed in winning over the audience.

The Wick has taken grief for using canned music, which it will again when finances dictate. But credit where credit is due, Ursua leads a rousing 8-piece onstage band – and the electricity is markedly working at a higher amperage with a noticeable heightened sense of immediacy.

The Wick’s fourth season opener does not have the heft of some of its other productions, but it’s a warm, pleasant, bouncy bon bon with few aspirations other to entertain.

This entry was posted in Performances, Reviews and tagged Andrea McArdle, James Clow, Norb Joerder, The Wick Theatre, They're Playing Our Song. Bookmark the permalink.