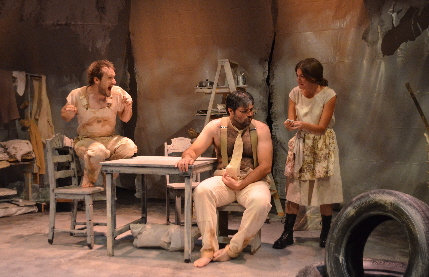 Tension is at the heart and soul of Thinking Cap Theatre’s Mud, a three-hander by Maria Irene Fornes, now at The Vanguard in Fort Lauderdale.

Director Nicole Stodard puts her stamp on the dramatic 17-scene play, most noticeably bringing a brightness to the dingy world of Mae (Gretchen Porro), Lloyd (Christian Vandepas), and Henry (Alex Alvarez) through creative staging, an impeccably interesting soundtrack, and finding three actors who are willing to go out on a limb with her.

Fornes sets her sights on showing an unabashed view of extreme poverty in her 1983 play, but there’s no time reference here. For the characters, poverty is timeless.

Mae and Lloyd live somewhere in the backwoods of America, yet close enough to a city that they have access to education and medical clinics. They live in squalor, in an old farmhouse left to Mae by her father. Tractor tires double as a lounge chair and floor to ceiling windows made of plastic keep out the rain. There are pigs to tend to and Lloyd, who has become a surrogate sibling to Mae by way of her father, is the farmhand, although he is as much of an animal as the creatures he tends to.

A man in his 20s, Lloyd’s mental capacity is that of an eight-year-old boy. He is suffering from an illness that has rendered him impotent and, at the outset of the play, he is refusing to go to a clinic despite Mae’s urging, which is less than kind. “You’ll die like a pig in the mud and your skin will bloat in the mud,” she tells him.
Not only is Lloyd physically filthy, covered in dried dirt, but he’s “dirty” in another way. Fornes shows his animal side when he tells Mae he’s engaged in fornication with one of the farm’s pigs named Betsy.

This is the stark reality of the script. People stuck in their condition – stuck in the mud, so to speak. But Mae has plans to better herself – she’ll get out of her filthy living and die, when she does, in a hospital with clean, white sheets. Her way of dreaming of breaking free.

A family friend, Henry, enters the picture and creates even more tension in the household. Mae is drawn to his intelligence – he can read some of the long words from the pamphlet she brings home that describes Lloyd’s disease. She tells him she’s drawn to his knowledge, which makes him attractive to Mae. He’s not much above the two, however, his jacket covered in mud, and in need of a place to live. When Henry becomes paralyzed and can no longer speak, he too becomes a hindrance to Mae – just another impediment to her moving forward.

The play is difficult – Fornes’s stark reality is angry, sometimes dark, and often gritty. What Thinking Cap brings to Mud is a way that finds the beauty in the muck. Stodard relishes the playwright’s words – discovering the poetry in them. She’s also created poetry in motion between each scene as the characters move through the scenes against a soundscape that adds to the heightening tension.
The slo-mo shows the almost monotonous routine that keeps them afloat – Mae getting her lesson book, the three sitting down to soup, bread and butter – and then some of the more dramatic moments – Mae’s irritation with the man-child Lloyd and later, her impatience with both Lloyd and Henry.

Bathed in a pink light, the characters move through time with a soundtrack of string selections that are far from pretty – some screechy and high pitched – industrial and mechanical. Three songs accompany Mae’s journey –  Appalachian a capella folk songs by Jean Ritchie with lyrics that seem to speak to Mae’s deliverance.

Stodard has built these devices in as Mud calls for either blackouts between scenes or character freezes. She’s brought light into the darkness of the play, which adds a dimension of hope – somewhere, perhaps in some future time and maybe not with these folks, but with people plagued by poverty in general.

She’s chosen a smart cast who work perfectly as a trio, an absolute must. Porro creates Mae to have the temperament of a cage bird, pecking at Lloyd and then at Henry. The tension she builds into Mae works as a slow burn against what Vandepas has created in Lloyd as a firecracker who is constantly igniting and Alvarez’s subdued Henry, who seems to trudge through life as if he’s slogging through mud. When Henry becomes paralyzed, Alvarez turns his character into a pitiful and pleading man-child, too. The two men’s characterizations act as bookends trapping Mae in their own muck.

There’s so much to see and feel in Mud, from the beauty of the words by the Mother of Avant-Garde Playwriting to Stodard’s deep understanding of the portrayal to the actors who dive heart and soul into every inch of it. 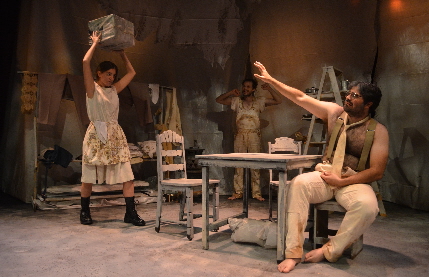