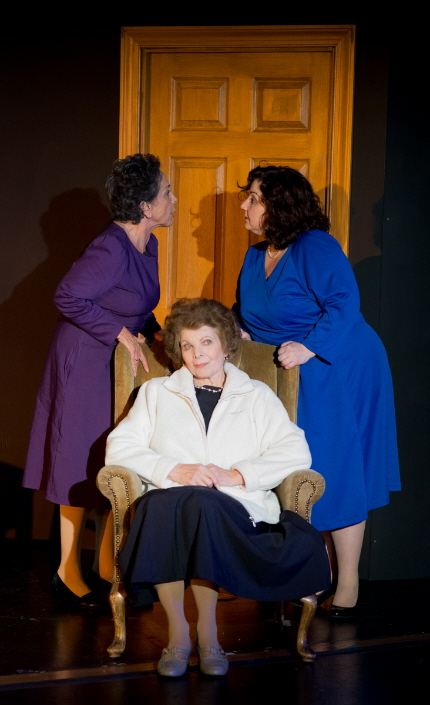 Phyllis Spear, Renee Rogoff and Clelia Patrizio are three generations of women trying to cope with their pasts and present in Door To Door / Photo by George Wentzler

Even before a word is spoken in the West Boca Theatre Company’s presentation of From Door to Door, director Shari Upbin cues the audience that, in the next 90 minutes, they will be presented with three female perspectives.

She has her actresses enter from the back of the auditorium, and walk individual paths up the aisles and to the stage almost gliding in a surreal step to the music of L’Dor V’Dor (From Generation to Generation). It is a determined and dramatic way to start this generational play that’s a mix of past and present, a brilliant paean to family life, and a heartfelt portrayal of the bond between mothers and daughters.

Playwright James Sherman, best known for his play Beau Jest, has said his mother was the inspiration for From Door to Door, and it shows through in the personal story. These are the kinds of stories that are passed down through generations — a tree of family tales that continue to influence generations. Sherman takes his audience through a cycle of 65 years in the lives of Bessie, Mary and Deborah, from 1936 to 1999. As Upbin so eloquently says in her notes, “We are all taken on a long journey in the blink of an eye . . . as in our time here on Earth.”

The opening scene finds Mary (Phyllis Spear) seated in an overstuffed chair, a chair that looks as if it has become a cradle of comfort for the woman. We soon learn that she has been sitting shiva after the death of her mother, Bessie (Renee Rogoff).

Her daughter, Deborah (Clelia Patrizio) takes a blank canvas from an easel and brings it to her mother in hopes it will help Mary rekindle her passion for painting. It is her time, now that she no longer has to take care of her own mother, a husband, children, and a home.

This is the catalyst that sends Mary back in time, placing her in the Lincolnwood, Ill., apartment in Bessie’s suburban Chicago kitchen. It’s our first introduction to Bessie who barks at the child, “Walk on the paper” so as not to create a mess on her clean floor.

It is Bessie, too, who squashes Mary’s dreams of being a painter. “You have to do what you are supposed to do,” she says, telling the child that girls are not painters, but wives and mothers. “The world is a dangerous place,” she warns. “Only with your family are you safe.” Bessie, a Russian immigrant, married a man who was chosen for her — “first you get married, then you fall in love,” she says matter of factly about arranged marriages from “the other side.” Rogoff as Bessie commands each of these many parable teachings with a strong delivery. She is simply captivating as the matriarch.

Rogoff and Spear are endearing to watch as they play off each other with a rhythmic back-and-forth banter which relates the loving tension that inherently exists between a mother and daughter. The talented actresses are able to carry this throughout — from the dynamic of a schoolgirl and her mid 30s mother all the way to the twilight years of the play where the women have aged into their 70s and 90s respectively.

Upbin’s tender direction skillfully leads all three of the women who must portray a number of different time periods without any change of set or costumes. It is a challenge for the actresses, who must play a range of characters from ages 12 to 94, but with Sherman’s script, Upbin’s understated hand, and the actress’s abilities, there is a delicate balance that is achieved between believability and the maintaining of the necessary illusion called for in a memory play.

Another device that serves the illusion, too, is the use of pantomime rather than props  –  Patrizio is so convincing in her pantomime in the tasting a cabbage soup that the smell all but wafts through the Biefield Auditorium.

Prudence Croft’s costumes must be able to weather all of the time periods, and she achieves this with her simple dress designs. Sean Cutler’s soft, amber lighting design helps to create a sepia tone that gives many of the scenes an almost photographic scrapbook appeal, which works hand-in-hand with Douglas Grinn’s homespun set design that must serve as different living quarters without a change of scenery. Matt Corey’s sound design uses a selection of traditional and era-specific music that rounds everything out, complementing the tone.

Microphone problems created a few static moments in a recent afternoon performance, but to the actresses credit they persevered, showing their veteran muster and not letting the technical difficulties affect the pace of the play — the pacing, which was so on point here, was crucial to having From Door to Door unravel just right — and it did.
West Boca Theatre Company has selected an insightful work that conveys not only American Jewish culture, but American family culture. You don’t have to be Jewish to relate to From Door to Door — you just have to have a mother.