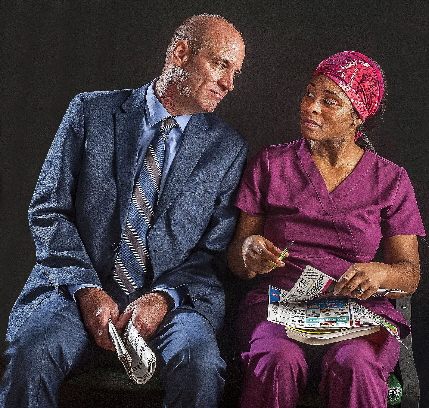 We can say this merciless dissection of race relations in the 21st Century virtually defines the term “thought-provoking.”

But we cannot explain much further than the shattering fierce drama circles around a wealthy white businessman who strikes up an acquaintanceship with an African-American nursing student on a municipal bus headed for Philadelphia’s ghetto. Believe me, you have no idea where it’s going from there.

So how can we recreate the power of Bruce Graham’s incisive script and GableStage’s superb production while sidestepping revelations that it would be criminal to expose? Those twists are not crucial to the play thematically. Arguably, there’s some unfair deception at work. But they provide the punch that lands the ideas so solidly.

We can only assure you that this timely cross-examination of the abyss separating ethnicities, well-intentioned hypocrisy, tyrannical political correctness and questioning our commitment to conventional morality will force discussions in the late night car ride home and maybe at the breakfast table. Heck, those discussions started at intermission opening night.

We can reveal that this represents some of the finest work that actors Tom Wahl, Rita Joe and Mia Matthews, and director Michael Leeds, have gifted us with – a statement that regular theatergoers will appreciate given their past award-winning work.

Plotwise, we can only take you a third of the way into the two-act evening. Ray (Wahl) is a middle-aged disenchanted executive in a Philadelphia financial firm. He is married to the delightfully warm and witty Roz (Matthews) who commutes from their suburban Main Line home into the inner city to teach underprivileged minority students, often focusing on one especially challenging teen.

They often have dinner in the city apartment of Christopher (Ryan Didato) who grew up next door and is writing a sociology dissertation on “Male African-American Images in Television Advertising.” He is married to the idealistic Molly (Whitney Grace) who is teaching at a private school in the suburbs.

The four indulge in spirited and ultra-witty banter about the differences teaching in such disparate schools, as well as Christopher’s discovery of advertising agencies’ condescending memos requiring that ads must depict supervisors and executives as African-American and that spokespeople should be of vaguely multi-racial.

Roz jokes about having low expectations for her students: “Effort goes a long way in my class. Some of these poor kids have never had a goal in their lives—except maybe not to get shot.” And later she jibes, “Every week in the faculty room they have a betting pool on how many times I get called… white bitch.”

While clearly a put-your-money-where-your mouth-is altruist, Roz still punctures the well-intentioned hypocrisy of Molly’s protestations. To illustrate, Roz challenges Molly whether she’d want her car to break down outside Molly’s ultra-safe school or Roz’s facility in the ghetto.

After Molly stutters and sputters, Roz gently but firmly retorts: “Molly, I would swear in court you are not and have never been a racist. You answered that question based on common sense. You were honest. None of us want our car to break down in the bad neighborhoods and around here the bad neighborhoods are black. This is a fact. But I work with people—like my (African-American) principal—who would call you a racist in a heartbeat. You would be perceived to be a racist because they didn’t like your answer. It’s the new McCarthyism—don’t like the way someone thinks, call ’em a racist. Someone calls you a racist, how do you defend yourself? Guess what—you can’t.”

This kind of nuanced argument is emblematic of the entire play, although in ways the audience cannot predict at this juncture.

Interspersed among those pre-dinner bull sessions are scenes in which Ray inexplicably rides an inner city bus and strikes up casual conversations with Shatique (Joe) a coupon-clipping single mother who has farmed out her son most of the week to her mother in New Jersey to protect him from the cancerous violence that rules her neighborhood in north Philadelphia.

As the play progresses, we realize that Ray is riding the bus regularly for reasons that he keeps close to his Brooks Brothers vest. Something off-kilter is going on; we just can’t guess what.

As their relationships evolves, Shatique claims Ray simply cannot “get” what it means to be black. Skeptical that his liberal leaning could be completely disconnected, he challenges her, “Okay, then. Enlighten me. What don’t we get?”

Shatique, through a scorching Rita Joe, says, “What-it’s-like. You never…walked into a store and had security all over your ass for no reason. You never hadda worry about a trigger-happy cop who thinks you might be a prostitute just ’cause you’re walkin’ down the street by yourself. Have you, huh? Always havin’ to do just a little extra so people aren’t scared of ya. I gotta keep a big, happy smile plastered on my face every time I’m at work or those old people start hidin’ their jewelry. Always like I’m some sorta threat. Watch out for her—she’s dangerous. You know they all steal. They smile back but I can feel it. I hear what they’re sayin’. No matter what I do it’s never gonna be good enough. Never-good-enough. Forget bein’ a nurse, forget about a 3.8 GPA. I could be president of Harvard Medical School but if I walked down your street at four in the afternoon everybody’d think I just cleaned your house.”

The play is suffused with how the aggravated events of recent years have cauterized people’s willingness to bridge a chasm wider than any of the players allow themselves to realize.

Didato and Grace acquit themselves admirably, but Graham has given Wahl, Joe and Matthews intellectually meaty, complex, emotionally-charged raw material that they reward with superbly delineated performances, sometimes passionate but always naturalistically credible.

Matthews’ range has always been remarkable, from drama such as the Carbonell-winning turn in After to wacky social commentary comedy such as Hir. Her triumph here is making it clear that sharp-witted Roz cares deeply about her work, but has seen so much fallout from social inequity that she has little patience for Molly’s blithely accepted homilies.

Joe has been turning in memorable performance after performance in recent years including her wary girlfriend in M Ensemble’s Seven Guitars.  But although she often has played women trying to survive such circumstances, her Shatique eclipses all of that work. From her voice to her facial expressions to her body language, Joe slips seamlessly into the persona of a thousand women you’ve seen striving to escape a toxic environ despite their near certainty that the deck is rigged. While perfunctorily outwardly cordial, Joe’s Shatique exudes suspicion of anything promising – with good reason.

And saving the best for last is Wahl. Physically, he looks nearly the same in almost every role: tall, handsome, genial. But his genius is in completely inhabiting quietly complex people whose deep angst, anger or sadness lies just under the cool composed surface, whether it’s the heroine of I Am My Own Wife or William Inge in Billy and Me or the troubled father in After.  In White Guy, he seems like a likable suburban Everyman in whom you should see yourself. Yet when secrets and extremities are revealed, Wahl has laid the subconscious groundwork so it’s perfectly believable when his seething anger emerges.

Guest director Leeds elicits and molds these superb performances, but he also moves the story fluidly, having Ray slide from one scene in one location into the next scene in another location before the first one quite ends.

I’ve already said too much. In the end, you’ll just have to trust me. Don’t miss this.

White Guy on the Bus runs through Sept. 9 at GableStage, 1200 Anastasia Ave., Coral Gables, inside the Biltmore Hotel. Performances 8 p.m. Thursday-Saturday, 2 p.m. and 7 p.m. Sunday. Runs 1 hour 45 minutes including one intermission. Tickets are $52-$57. For tickets and more information, call 305-445-1119 or visit GableStage.org