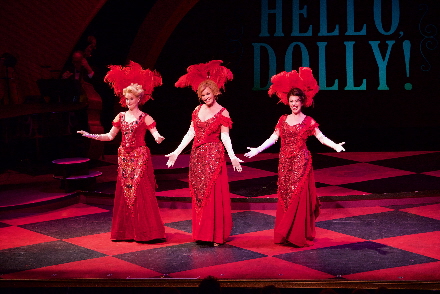 Susan Anton, center, and her buddies sub for Carol Channing, Bernadette Peters and Bette Midler among others in the Wick Theatre’s revue of Jerry Herman tunes, Jerry’s Girls / Photos by Amy Pasquantonio

Broadway composer Jerry Herman has a connection to South Florida (he graduated from the University of Miami, there’s a theater named after him there, and the 86 year old lives part time on Miami Beach), and if you didn’t know all that, The Wick Theater in Boca Raton, with its many homages to Herman, happily continues its love affair with Jerry. Now, a reimagined Jerry’s Girls, a song collection of the Tony Award winner’s well-known hits, along with others that aren’t so recognizable, closes out The Wick’s fifth season.

The Wick’s been good to Jerry, and his popular works have been good to The Wick. In its last five seasons, the Boca Raton theater has staged Mame, which starred Leslie Uggams in the 2014 production there. Uggams was one of three stars in Jerry’s Girls when it opened on Broadway on Dec. 18, 1985.

The Wick has also done La Cage aux Folles, and Hello, Dolly!, both starring Lee Roy Reams. As Dolly Levi, Reams and The Wick will go down in history as the place where the first man played the matchmaker in a sanctioned U.S. production of Herman’s musical. Reams, who directed Dolly for The Wick, says in the production notes that when executive producer Marilynn Wick asked him to direct Jerry’s Girls, he said he would agree if he could do it in a different way. He got longtime pal Herman to sign off on the changes.

Originally conceived as a cabaret show in 1981, and written by Herman himself, Jerry’s Girls played for 139 performances on Broadway with three stars: Uggams, Chita Rivera and Dorothy Loudon, plus an all female ensemble. Reams adds a line-up of boys to The Wick ensemble, and also lets audiences in on the story of Herman’s ascent on the Great White Way.

Whereas the original was more cabaret than a chronological telling, this Jerry’s Girls goes through the timeline as four women take turns, together and separately, telling the story of the composer who started out with aspirations of being an architect, then after a meeting with Frank Loesser became the Irving Berlin of his generation.

Instead of casting the usual three women and ensemble, Reims has added four women, with the idea that one of those leading ladies has name recognition. She’s former Miss California, and Miss America runner up Susan Anton. One of the most famous models in the 1970s, with her statuesque 5 foot 11-inch stature, she starred in her own variety show on NBC in 1979, went on to perform over 5,000 performances with The Great Radio City Music Hall Spectacular, headlined a one-woman show in Las Vegas, and co-starred with Tommy Tune on Broadway in The Will Rogers Follies, and in a number of national touring productions. Anton and Reams sang a duet in 1986 on the Tony Awards.

The show, whether done cabaret or otherwise, does get a boost from star power, and Anton’s name is familiar, and should be a draw to the show at The Wick. But, in a two acts that features more than two dozen songs, it also needs top-notch vocals. Sadly, Reams has given Anton more than she can handle in this department, where it’s obvious that some of Herman’s tuners seeming a bit too demanding for her vocal style. 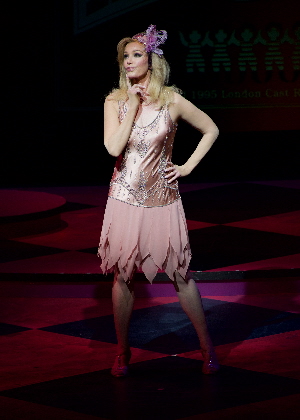 In Act 1, “It Only Takes A Moment,” the romantic ballad from Hello, Dolly, finds the star reaching to get on top of the notes, and it’s a strain in Act 2’s solo “Time Heals Everything” from Mack and Mabel, a song Bernadette Peters has kept in her repertoire since she originated the role of Mabel in 1974. While Anton may not be able to shine vocally in the early in Act 2 solo, “And I Was Beautiful,” from Herman’s Dear World, the melody almost doesn’t matter as it takes a back seat to the lyrics as they somehow align with Anton: “And now the years blur by, but every now and then, I stop and think of him and how he looked at me, and all at once I’m beautiful again.” Without a doubt, Anton is still beautiful at 67.

There are bright spots among her performance, and it’s when she’s playing to her strengths – funny alongside Blackhurst in the catty “Bosom Buddies” from Mame, and vamping it up with a few different old school movie star imitations – Mae West, Tallulah Bankhead, Marlene Dietrich, in La Cage Aux Folles, which brings out Anton’s Vegas entertainer side. (Might it be considered that understudy and strong vocalist Lourelene Snedeker step in for the vocally demanding songs, and let Anton loose where she can relax into her comfort zone?)

Blackhurst is the strongest singer in the foursome, a powerhouse known for her dead on imitation of Ethel Merman (she starred and wrote the cabaret Everything The Traffic Will Allow about Merman that garnered a glowing review in Variety in 2001, when she performed it in Manhattan). Too much of Merm goes a long way. It’s hard not to hear the same inflections in Blackhurst’s stylings of songs that are not meant to be Mermanesque.

Act 2’s achingly beautiful duet, “Kiss Her Now,” is spot on with harmonizing by Blackhurst and Sprague that’s pitch perfect. Kavanaugh’s frenetic energy plays well in numbers, which call for it, such as Act 2’s “Tap Your Troubles Away,” in which she nails the tap dance number, but seems over-caffeinated in the Act 1 “It’s Today.”

The male ensemble adds pizzazz in Act 1’s “We Need a Little Christmas” with Blackhurst getting dressed by the boys, who play reindeer games to snappy choreography by Emily Tarallo, and decorate Blackhurst all the while as a living Christmas tree. Tarallo’s choreography, along with some creative costuming, where Kavanaugh is dressed a la Shirley Temple, in “Tap Your Troubles Away” is a highlight in Act 2, and all around amusing.

Speaking of costumes, you can always guarantee a gorgeous parade in any Wick show. And Jerry’s Girls is no exception with Jim Buff’s costume design, and surely with help from Kimberly Wick, curator of the Costume Museum at The Wick. There are so many costume changes, and done seamlessly, that it’s difficult to keep count, but there are plenty of Bob Mackie-esque gowns that Anton can, and does, wear so well.

“We Are What We Are” from La Cage Aux Folles has the ensemble dressed with such extravagance it elicited a collective gasp from the audience on opening night. There’s a missed opportunity to wow the crowd with costumes just a few numbers later towards the end of the show. As Blackhurst sings “I Am What I Am,” albeit true to the original Jerry’s Girls, she stands solo, wearing a rather nondescript dress. It’s almost as if we’re waiting for multiple walk-ons, the ensemble perhaps in a show-stopping fashion show, to dress up the song. It doesn’t happen.

There’s still a lot going on in this whirlwind, and keeping things moving is musical director James Followell on piano, Julie Jacobs on drums (listen for her bells in “Christmas”) and Rupert Ziawinski on bass.

Throughout the show, projections of Herman’s hits (Dolly, Mame and La Cage) and misses (The Grand Tour, Mack and Mabel), assist in the storytelling – the actresses are directed to break the fourth wall to tell the audience about the composer’s successes and failures, and his ups and downs.

Like Herman’s repertoire, The Wick’s Jerry Girls struggles with the same delicate balance.