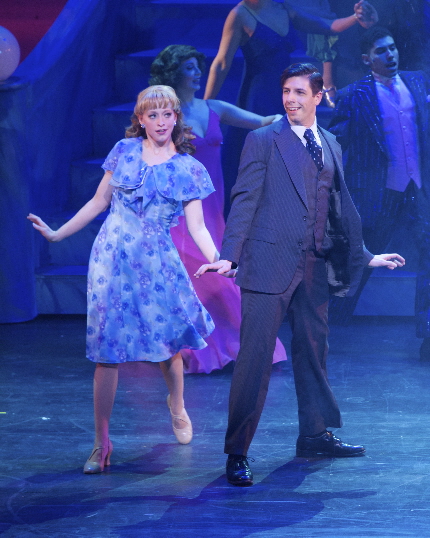 MTN is not an abbreviation for “mountain,” but a brand new entry in the cyber lexicology for Musical Theater Nerd – a title many of us would have worn with pride if we had known it existed before this month.

Curtains is a show designed for MTNs, but also for anyone who loves that American art form known as musical comedy, or anyone who has ever played Toto in a community theater production of The Wizard of Oz. Envisioned as a no-calories hoot of a love letter to the quirky dysfunctional denizens of the theater, it is accurately promoted with tongue firmly in cheek as “A New Backstage Murder Mystery Musical Comedy.”

As evidenced by the production at The Wick Theatre, it’s not a perfect piece by any means, but the love that the skillful authors and the talented local artists have lavished on it is so infectious that a willing audience will be entertained.

The premise focuses on a pre-Broadway tryout in Boston in 1959 of a troubled frothy musical Robbin’ Hood! resetting the legend in the Old West. The obnoxious talentless leading diva Jessica Cranshaw (Kimberly Wick), a washed up émigré from Hollywood, is murdered at the final bow of the first preview. Homicide detective Lt. Frank Cioffi (Tony Edgerton) sequesters the entire company overnight in the theater while he investigates. That forces them to frantically rewrite, rehearse and restage the show over the next 48 hours while Cioffi investigates – and we get to watch.

The kicker is that this hard-boiled dick is an Eisenhower Era version of an uber-MTN. A former amateur thespian, he is inappropriately overjoyed to be up close to the sausage-making process known as professional theater. But in between his giving advice to the director, the body count begins to mount. He must solve the case before there’s no one left to step-step-step-kick-kick-touch.

But there are an endless cast of suspects: Composer Aaron Fox (Michael Ursua) and his divorced wife and lyricist Georgia Hendricks (Julie Kleiner) who is drafted to take over the lead; the flamboyant British director Christopher Belling (Kevin Healey); the leading man-choreographer Bobby Pepper (Alex Jorth); the winsome understudy Niki Harris (Mallory Newbrough) whom Cioffi falls for hard; the understudy to the understudy Bambi Bernet (Emily Tarallo), a dancer who is really the producer’s much abused daughter; the money man Oscar Shapiro (Peter Librach) whose investment from selling men’s clothing is endangered; Johnny Harmon (Brian Padgett), the stage manager who knows everyone’s secrets; Sidney Bernstein (Alan Gerstel), the hateful co-producer blackmailing everyone; the despicable theater critic Daryl Grady (Cliff Burgess) and above all, the on-site producer, Carmen Bernstein (Angie Radosh), a hard-headed businesswoman.

It’s enough to make Agatha Christie’s head swim. But the bulk of the show provides a peek into the backstage intrigue of the heart, pocketbook and resume interspersed with full-out production dance numbers, heartfelt love songs and snappy repartee.

Curtains is an unusual choice for The Wick whose leaders tailor their season to titles their mainstream audience already cherishes. Curtains was a modest success when it opened on Broadway in 2007 for a run of 511 performances. Theater founders Marilynn and Kimberly Wick fell in love with the show when they saw it.

Part of the New York success stemmed from it being the last new show that beloved lyricist Fred Ebb was working on with composer John Kander when he died. MTN’s don’t need to be reminded they were the part of the teams behind Cabaret and Chicago. (For the stickler MTNs, the very last show sharing credits, their The Visit in 2015, was a re-re-re-retooling of work they had done years before in various incarnations).

The Curtains lyrics had to be finished by Kander and Rupert Holmes (The Mystery of Edwin Drood). Holmes also wrote the book after initial writer Peter Stone died. (The original orchestrator also had died earlier. Hmmmmm.) It also benefited from stars David Hyde-Pierce as Cioffi, who had endeared himself to the theatrical community and won a Tony for the role, and veteran character actress Debra Monk as Carmen.

One of the show’s undiluted strengths is the snappy script conceived by Stone but overhauled by Holmes, a man of various genres whose experience writing crime novels invests the plot with a nicely intricate but legitimate mystery. Besides Holmes’ delightful gentle lampoon of every musical theater convention and trope, the script is loaded with witty one-liners, sharp rejoinders and catty jibes as the denizens try to make lemonade out of the lemons under deadline pressure. (Full disclosure: Holmes and this critic are acquaintances.)

The score is serviceable with Kander’s peppy razzamatazz music and variable lyrics that sometimes rise to Ebb’s past glory such as the ingenious couplets in the faux production number in a western saloon, “Thataway!” The words and music for the exquisite ballad “I Miss the Music,” lovingly rendered by Ursua, are both by Kander as an elegy to his late partner. But while Curtains was never meant to have the gravitas or satirical edge of Cabaret, Chicago or Kiss of the Spider Woman, neither is it technically in the pantheon of their legendary work either. Still, any song that has the phrase, “Gorky schmorky” is worth a listen.

The finished product is intentionally a mash-up that sort of works, although you keep thinking this could be about 20 minutes shorter. The weak facet is that when you stage numbers from Robbin’ Hood! that are intentionally kitschy and lame, they have to be pulled off with supernatural skill to keep the audience charmed. Director Clayton Phillips and choreographer Bryan Knowlton come close in huge production numbers like “Thataway!,” but other numbers such as the evolving “In The Same Boat” just make you want the show to move on.

On the other hand, the authors, Phillips, Knowlton, musical director W. Brent Sawyer and Edgerton (well, the entire cast) are in their element acting as our surrogates in the secret wish fulfillment of theater lovers who dream of – and never will be —on the professional stage.

Edgerton, a New York ringer with a convincing Kennedy accent, is delightful as the fan boy in sheer heaven, fighting a losing battle between keeping his all-business demeanor in the face of cavorting with show folk. Looking a little like Sean Hayes, Edgerton exudes a lovable affability while crooning songs and in the 11 o’clock number performing a dream Fred-and-Ginger number with Niki.

Radosh, better known for her superb dramatic chops, lets loose her comedic side and confidently leads the crew in such brassy Mama Rose numbers as “What Kind Of Man?” excoriating critics and “It’s A Business” reminding everyone that art takes a back seat to commerce, with such lines as “I put on The Iceman Cometh. Nobody cameth.” 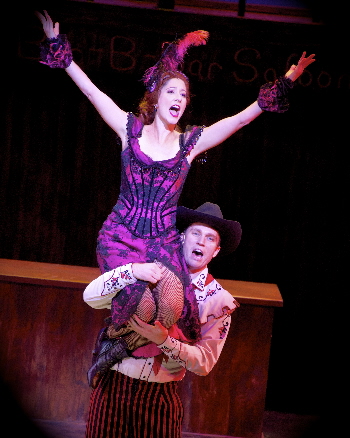 The rest of the cast is unassailably solid (including Kimberly Wick in her cameo) but three deserve special mention. Kleiner, who was so good in Actors;’ Playhouse’s Toxic Avenger this year and illuminated 42nd Street at the Wick, is dead perfect as the lyricist who amazingly steps into the star role with jitters that evaporate into a flawless performance.

No one nails those acidic putdown lines as well as Healey whose plummy voice, extravagantly fey demeanor and physical appearance are reminiscent of the British actor Timothy Spall (trust me, you know his face). Plus, Tarallo dances an impressive solo in the middle of the silly “Kansasland” production number.

The costumes, natch, are perfect, especially with the director’s brocade pattern vests and his Victorian overcoat with cape.

The Wick playbill includes a glossary of theater terms explaining such terms as “Equity representative,” “green room” and “trunk music.” If you already know these, this show may be for you.