Wick’s West Side Story Is Adequate But Not Transcendent 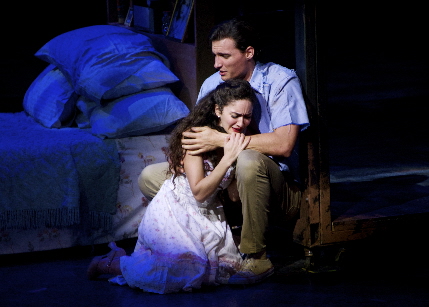 Mary Joanna Grisso and Thaddeus Pearson clutch each other after Tony kills Maria’s brother in The Wick Theatre’s West Side Story / Photos by Amy Pasquantonio.

No art form other than theater is quite so dependent for transcendent success on the alchemical magic that no measure of talent and skill can create on its own. Theater lore is filled with tales of some of the finest talents in the business unable to make something rise from adequate to superb.

So with all the ability and earnestness invested in The Wick Theatre’s production of West Side Story, the modestly entertaining result is competent but rarely reaches those emotional peaks that the work is proven capable of.

Other than unrestrained and loud overacting by all but one standout actress, there is nothing wrong with this riff on the classic musical. The cast does justice to the glorious music, the ensemble reasonably masters the crucial dancing, a few scenes are affecting since the material is so well crafted and an undemanding audience will be glad they came. But if you’ve seen other productions, by comparison, this one never delivers the powerful punch that people talk about throughout a season or even the next morning.

What does resonate a little more loudly this specific season is the depiction of a society of “native Americans” and immigrants deeply, seeming irreconcilably, divided by hate and prejudice until the final seconds of the story. But not only did Leonard Bernstein, Stephen Sondheim and Arthur Laurents know this would be timeless, so did Shakespeare. Interestingly, the Puerto Rican Sharks here contain two African-Americans in their ranks.

With South Florida’s infamously short rehearsal times, the Wick wisely hired several people who have done their roles or their creative jobs in previous productions, including but not limited to co-director/choreographer Charles South, music director James Olmstead and leads Thaddeus Pearson as Tony who did the show in the West End and on an international tour, and the aforementioned standout, Mary Joanna Grisso who has played Maria by her playbill’s account 550 times including a national tour.

Why this doesn’t land better is a bit of a mystery. It’s not a lack of energy and commitment from the 29 cast members.

One likely problem is the direction of South and co-director/choreographer Ryan VanDenBoom. They let everyone but Grisso and to some degree Pearson overact or just “act” rather than “be.” West Side Story is not meant as a naturalistic piece; it can’t be when you have Tony and Maria fall in love literally at first sight. But you rarely can forget here that you are watching performers. Further, the tone lacks any grit, menace or even the gravitas needed for this to be a heart-breaking tragedy.  One clue to this is that while most of the principals are out of towners unknown to local audiences, every one of the locals in the cast have done much better and more credible work on other stages here.

But the petite Grisso with a waterfall explosion of curly hair, does bring a desperately needed acting credibility and an expressive soprano to the part. Grisso’s youthful Maria is jazzed to be in this new country with new horizons, but as in some recent productions, she’s no breathless naïve victim-in-waiting. Her Maria has verve and a glowing lifeforce. She caresses stanzas of “Tonight” and she shares honor for the high point of the evening with Sydney Mei Ruf-Wong as Anita in the soaring duet “A Boy Like That / I Have A Love.”

The clean-cut Pearson, tall and handsome, also has a strong warm voice evidenced in his nicely-melded duets with Grisso, with whom he has an acceptable amount of chemistry. His acting is earnest as he tries to inject Tony’s optimism and sensitivity. But it’s hard to buy him as a young starry-eyed swain, and this Tony has never been in a street gang.

In fact, nobody in this cast is someone you’d be afraid to meet in a dark alley, which further cripples the tension. Yes, we’re supposed to have some sympathy for these folks as societal victims, but without that frisson of disaffected alienated and violence-prone adolescents, there’s little power driving the narrative. Speaking of adolescence, as seems inescapable in almost any production, everybody is a good five to ten years too old to be characters who, in the most generous interpretation, are in their late teens.

Yet everyone involved is giving the production everything they have including Ms. Ruf-Wong as Anita, Jeff Smith as Riff and Pasqualino Beltempo as Bernardo. The supporting cast includes familiar locals such as Shenise Nunez and Jerel T.  Brown, and as the adults, Cliff Burgess as Lt. Shrank and Howard Elfman as Doc.

Mssrs. South and VanDenBoom do quote much of the original Jerome Robbins dance vocabulary such as the iconic sideways high kicks, but the confines of the stage have forced them to invent most of their choreography.

The music is digital rented from The MT Pit LLC (cute, say it out loud) although the cast is conducted via TV screens by Bruce Levine, and Olmstead has done a decent job molding the vocal sound.

Michael McClain’s setting with Jose Santiago’s lighting is unique. The environment is dominated by two simple towers of metal cubes. The towers are rolled in various configurations to create different locales, augmented with rolled on furniture and a background of graffiti-marred brick buildings and hurricane fences. South and VanDenBoom take advantage of its nimble fluidity to produce an admirably cinematic flow to the production.

Again, this is not a bad production in any sense, but neither is it the finger-snapping high tragedy it can be. 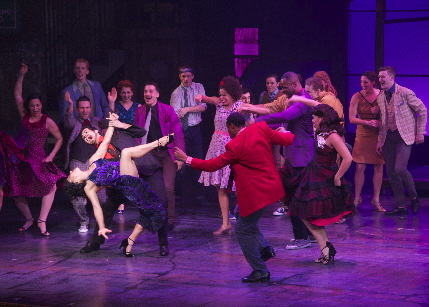