The First Step: Diary Of A Sex Addict Is Hilarious, Insightful And *Really* Unflinching 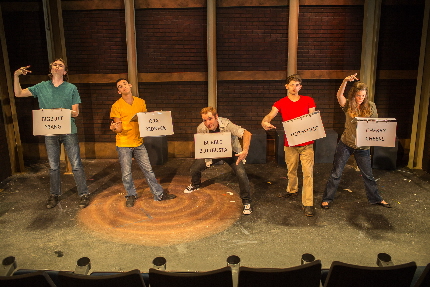 The milder of the screen names that sex addicts use in chat rooms as depicted in The First Step at Island City Stage which Noah Levine, Stephan Pineda, Mike Westrich, Michael Friedman, GretchenPorro / Photos by GeorgeWentzler

And Michael Leeds’ play is, indeed, very funny. But woven into the outrageous humor is a compassionate in-depth examination of the emotional spiral wreaked by the tyranny of this specific disease/illness and applicable to other compulsive obsessions.

The crucial meld of those two disparate strains in Island City Stage’s production is executed perfectly because, first, veteran director Leeds is helming this production. Often a playwright-director cannot provide a distanced evaluation of whether what’s in his head is making it to the stage. But Leeds is too experienced a hand to fall victim to that problem. Further it is his precise knowledge of the script’s quirky vision that allows him to slide smoothly and instantly between the warring tones.

The other assets in that concoction are leading man Mike Westrich as the titular hero plus a quartet of fine chameleons each playing at least eight denizens of the world Westrich travels through.

Westrich plays our gay protagonist Joe, a highly congenial tour guide through a realm of someone consumed with a deep-seated psychological need for sex, anytime, anywhere, everytime, everywhere. With dry droll wit and a ready smile, he escorts us through simulated real world couplings and hilariously satirical imaginary situations such a Dating Game edition featuring gay and straight sex addicts, and a wild rap enumerating the bizarre screennames that addicts use in chatrooms.

Pointedly and tragically, none of his hookups harbor even a smidgen of emotional connection. He says, “I don’t get dating. You know that Tom Cruise movie where Renee Zellweger says, ‘You had me at ‘hello’? Well, with the guys I’ve met it’s, “You lost me at ‘hello’.”

To underscore Joe’s detachment of pleasure from emotion, we meet him seated in the opening scene cheerily raconteuring the audience at great length — while someone is administering oral sex the entire time.

Slowly, between the laughs, Leeds feathers in how troubled Joe is, starting with that he may be HIV Positive, but that it doesn’t much curb his appetites or his habits. We also learn that his father sexually abused him for years when he was a child.

But the more profound cost is revealed when Joe stumbles into a significant union with a would-be partner. As the relationship develops, Joe becomes decreasingly able to have physical sex with the man, while his need for meaningless coupling only intensifies.

Leeds, one of the most respected freelance directors in the region, has written other plays and musicals, but this one has more depth, polish and multiple levels than others we’ve seen.

At a crucial point of realization, Leeds has Joe drop the protective snark and say, earnestly, “Being a sex addict is like being caught in the rapids at night. The water’s roaring in your ears. You can’t hear anything else. You can’t see anything else. You spin faster and faster toward the drop off. If you’re lucky, you grab onto a branch and pull yourself to shore. You’re drenched, shivering, scared. You’re on dry land but the river’s right behind you. You can fall back anytime. You’re afraid to move. And then you see the faintest light in the distance. But you have no idea how to get there.”

This script had a staged reading at the New York Fringe Festival in 2007 and a full production at Empire Stage in 2011. His dialogue is whipsmart and Leeds the director knows exactly how to implement the imaginative scenes created by Leeds the playwright. Subtle but well-planned pacing also keeps the 75-minute play moving fluidly, and the morphing of the overarching tone from farcical to poignancy is convincing.

Westrich once again proves his ability to create a thoroughly congenial if somewhat troubled Everyman who we not only recognize from the neighborhood but even from the bathroom mirror. While his exterior personality is often pretty much the same in most shows (other than Outré’s Thrill Me), Westrich fearlessly digs deep to excavate and convincingly portray a wide panalopy of emotions and personality traits within that identity. It’s a rare gift.

Supporting actors Gretchen Porro, Noah Levine, Stephan Pineda and Michael Friedman smoothly inhabit an every changing kaleidoscope of roles, but even the most cartoonish characters have souls, something likely aided by Leeds’ well-earned rep as a director who gets the credible performances from most actors.

Michael McLain’s set is a simple brick wall with wooden pillars and a half-dozen classic theater boxes to rearrange as furniture. Most of the many different locales are indicated by Ardean Landhuis’ lighting design and David Hart’s sound effects.

Although Island City is favored by a pretty open-minded audience, know that the language, the situations, the topics and the humor are bluntly sexual, not exploitative or gratuitous, but really unflinchingly blunt.

Note: Performances frequently sell out in advance. Also be careful where you park. Neighboring businesses across the street have become less liberal about providing their spaces even off-peak.