OTHER VOICES: Round-Up Of Reviews of Beebo Brinker 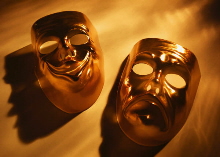 Today we start a new feature for the site called Other Voices. A community contains many different views and varying opinions. We want to bring some of them to you.

Other Voices may spotlight a feature story from another arts writer of specific interest to our Florida theatrical community of patrons, professionals, students and amateurs.

Sometimes, the space will provide excerpts from multiple reviews of the same production.

In most cases, we will publish a few paragraphs and provide a link if you wish to read further. A few sites require a subscription, but most do not.

As with the news, reviews and other departments, Other Voices has its own section on the site to browse, accessible by clicking on the “Voices” tab on the teal and white bar just below our masthead.

…The Kate Moira Ryan-Linda S. Chapman play, an Off-Broadway success in 2007, is the second show from Fort Lauderdale’s Kutumba Theatre Project, an LGBT-friendly company run by Kim Ehly. The script isn’t as strong as Ehly’s own Baby GirL, Kutumba’s memorable debut production. Yet in new digs at the Galleria Mall’s Galleria Studio Theatre (home of the Fort Lauderdale Children’s Theatre), director Ehly and a strong cast mine Beebo Brinker for not only its noir-style humor but for the sobering, resonant truths about the characters’ search for happiness in a judgmental world.

Told in cinematically short scenes, the play powers through its weak spots thanks to Kutumba’s engaging cast.

The play evokes a specific world quite well, but its themes — the search for love, youthful mistakes, bruising cruelty and the possibility of reinvention — resonate with anyone negotiating that path to maturity called life.

Kudos to Kutumba Theatre Project for adding spice to what can sometimes be bland theatre in south Florida with their production of The Beebo Brinker Chronicles.

At the helm of the company and director of this show is a steady-handed Kim Ehly. Her Kutumba is a welcome addition to the SoFlo theatre world, as well as the LBGT community it serves. And serve it does, in spades, with the mounting of this pulp fiction play.

Beebo may seem like a reprehensible user, but Fridh compels us root for her in the end. Only Fridh and Stabile are wholly able to traverse the tightrope of bad “B” movie acting and avoid falling into the abyss of melodrama. To be fair to all of the actors, some of this is inherent in the writing and trying to circumvent it is next to impossible.

To read more, go to: http://www.edgemiami.com/entertainment/theatre/reviews/theatre_reviews/149182/the_beebo_brinker_chronicles

This play is bawdy and salacious, full of suggestive language, sexual situations, even a little nudity – all for a cause that is both winningly witty and emotionally sensitive.

“As the characters love, fight, drink and reminisce across Tyler K. Smith’s spartan, utilitarian set design, Ehly directs the action with breezy pacing and cinematic ambience. Aided by an irresistible mix of ‘50s pop and jazz tunes, she transitions between Laura’s self-actualizing journey and Beth’s misguided attempt at suburban domesticity before bringing the two together in an explosive climax.

Kate Moira Ryan and Linda S. Chapman’s source material, which includes passages lifted directly from Bannon’s books, can be clunky, dated, nostalgically endearing and sometimes downright brilliant: “We can’t think straight because we always think gay,” delivered by Matt to Laura at a time of mutal melancholy, is one of the best lines in a play I’ve heard all year.

To read more, go to: http://bocamag.com/blog/2013/09/13/theater-review-the-beebo-brinker-chronicles-at-galleria-studio-theatre/

Take A Little Pulp, Add A Little Noir And Stir In The Lesbian Love

As directed by Kim Ehly, ‘pulp’ and ‘noir’ are the constant themes throughout the Beebo Brinker Chronicles. Actors read the overly dramatic lines from the books as some of the many scenes are played out, with assistant director Nicole Stodard and sound designer David Hart providing the appropriate background music (ah, that sultry, lonely sax) that adds to the overall cartoonish effect. When this slightly over the top style works, it works beautifully.  Pulp indeed.  And much appreciated by the packed house.

And the actors?  Top of the list are Niki Fridh and Christina Groom.  Fridh as Beebo flaunts her masculinity but cannot hide her vulnerability, and Groom as Marcie/Lili/Nina delights with each carefully delineated character.  The less experienced Blaze Powers does well with the role of Laura, as she travels from innocent to jaded lover and Sandi M. Stock handles the difficult role of Beth, the girl who cannot make up her mind.  Matt Stabile as Jack, the aging gay man who settles for convenience rather than love gets it right. The normally exuberant Rayner G. Garranchan has to pull back with the thankless role of Charlie, the argumentative straight man.

To read more, go to: http://miamiartzine.com/latest-features/theatre-reviews/1634-the-beebo-brinker-chronicles

That’s a shame, because most of the cast seems up to the job of having some sensationalized, soap-operatic fun with the script produced by Kutumba Theatre Project at the Galleria Studio Theatre in the Galleria mall.

Director Kim Ehly does her best to draw out some sort of mob-versus-snob appeal, mashing up theatuh effects (such as period-perfect costumes and wry, witty pop songs bridging scenes together) with cheesy noir narration right out of Raymond Chandler. But the required melodrama to support it all just isn’t there in the writing.

To read more, go to: http://www.floridatheateronstage.com/reviews/kutumbas-the-beebo-brinker-chronicles-about-lesbians-in-the-1950s-doesnt-quite-gel/

This entry was posted in Voices and tagged Kutumba Theatre Project, The Beebo Brinker Chronicles. Bookmark the permalink.

One Response to OTHER VOICES: Round-Up Of Reviews of Beebo Brinker