Slow Burn’s Avenue Q Has Actors Talking To Their Hands 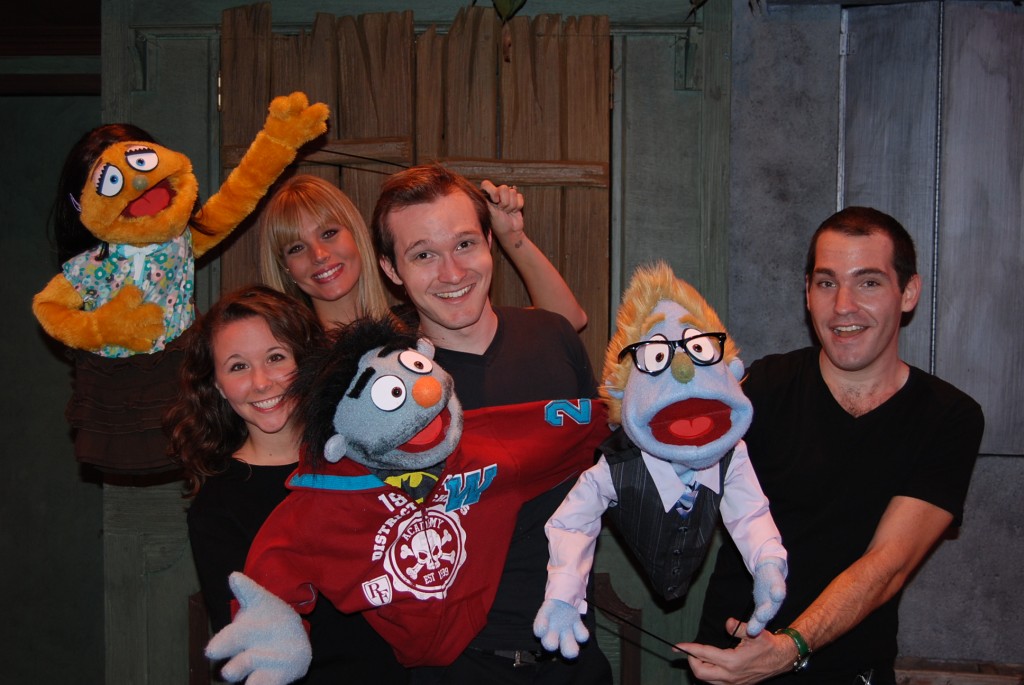 Backstage at rehearsals for this weekend’s opening of Slow Burn Theatre Company’s Avenue Q, it was not unusual to find actors offstage talking to their puppets.

“I love Kate Monster; she’s my friend,” actress Nicole Piro said of her furry alter ago in the very adult, irreverent spin on Sesame Street.

Michael Westrich, who portrays college graduate Princeton, said it goes farther than that. “Sometimes we’re backstage having a conversation and we find the puppets are talking.”

Working with puppets – albeit foul-mouthed puppets — is just another adventure for the burgeoning Boca Raton theater company that has made a reputation with challenging, quirky or rarely-seen musicals, ranging from the large cast Sondheim Into the Woods last season to the cult show about Siamese twins Side Show later this season.

Before settling on Avenue Q to open its fourth season, Slow Burn founders Patrick Fitzwater and Matthew Korinko asked actor and resident costume designer Rick Peña whether he could build the puppets from scratch.

See other advance features on shows opening this week and next.

It was serendipity. Peña has loved puppets since childhood, weaned on such Muppet shows as Fraggle Rock, built a few for his own amusement and “wore” a puppet as one of Snow White’s dwarfs in a Performance Project/Puppet Network production at the Broward Center. Peña isn’t acting in this production because he is committed to a niece’s birthday on opening weekend

Peña had taken on daunting challenges previously such as clothing the huge cast of Into The Woods and its two productions of The Rocky Horror Show, all while acting in the shows. But Avenue Q required him to build 24 large fleecy creatures (plus some talking packing boxes) that intentionally echo but do not copy the Muppets. He began drawing and stitching in August and was still delivering fine-tuned Avenue Q’s denizens at Tuesday night’s rehearsal. 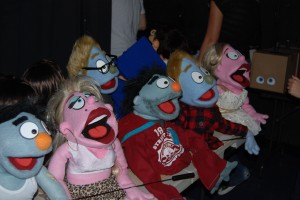 The disparate array of inanimate characters was spread out on long tables backstage on Tuesday. Although there are only eight major puppet characters, the show requires duplicate puppets because the creatures can’t make quick costume changes, Peña said. For instance, in one scene the character Rod is in bedclothes without glasses, in the next he is bespectacled and wearing a suit. Thus, two Rods.

Peña based most of his designs on the originals created by Rick Lyon, although he has created his own take on Rod and Princeton. Some use rods to manipulate the creature’s hands, like Kermit the Frog; others involve the actors sticking their free hand through the puppet’s arm and using their hand as the puppet’s hand. But what most people don’t and shouldn’t realize is that most of the basic puppet shapes are the same with customizations: Kate Monster has fur added and Lucy has those large mammaries.

Peña and Slow Burn spared little expense, using professional-grade reticulated foam, Antron fleece and the Jim Henson stitch, all designed to hide seams. It was a massive one-man  job. “I’m not bragging; it’s just that I love what I do,” Pena said with a quiet smile.

That, of course was only half the challenge. Next came training a group of actors who had never worked with puppets before, said Fitzwater, the director and choreographer.

Even when rehearsals began three weeks ago, actors wore eyeballs attached to a plastic ring on their hand to get comfortable with expressing themselves through hand movements.

Christian Vandepas, who like most of the actors must play multiple characters, explained, “What’s difficult is the ambidexterity of it, the ability to do so many things at the same time: act, dance, sing harmonies.”

Courtney Poston added with perfect timing, “And doing it in sync with the puppet.”

Piro laughed. “I thought it was going to be so easy.”  In one scene, she is voicing two puppets that she operates, Kate and Lucy, but the puppets themselves are in different sections of the stage. “You’re talking, but someone else is operating the puppet.”

In this and many other cases, that’s Poston, who operates several other puppets without voicing them and even operates one of Trekkie Monster’s hands, forcing her to coordinate like a ballet dancer with Vandepas when they bring Trekkie to life in tandem.

It requires both familiar and specialized acting skills, especially learning to keep the puppet expressive at all times. For instance, a slight tilt of the character’s head prevents it from seeming like a dead piece of cloth. The puppeteers dressed in black are visible at all times, so they act with their bodies and their faces alongside the puppets. That enhances the subtler emotions being sent across the footlights, but it carries a secondary challenge. “You have to be careful not to upstage your puppet; the puppet is the focus,” Westrich said.

There’s also the matter of physical stamina. Fitzwater held his arms up in a Marquis of Queensbury fighting stance. “Boxers only have to hold their arms like this for a little while. These actors have to keep them up all night. And sing and dance.”

One of Fitzwater’s challenges was to remember to direct both the actors and the puppets. “You find yourself directing the puppets and forgetting about the actors,” he said.

The gentle but R-rated satire was the surprise underdog winner of 2004 Tony Awards for best musical, best score for Jeff Marx and Robert Lopez (later to go on to The Book of Mormon) and best book for Jeff Whitty. It’s set in a down-at-the-heels urban neighborhood populated with wide array of human and not-so-human characters: the porn-addicted Trekkie Monster, pals Nicky and Rod (who swears he’s not gay because he has a girlfriend in Canada that no one has seen), a human being playing slum superintendent Gary Coleman (yes, that Gary Coleman), and the well-endowed Lucy T. Slut. There’s even a scene of Kate and Princeton having sex.

It ran on Broadway for 2,500 performances, opened a Las Vegas sit down company, then toured the United States and was exported to other countries. When it closed on Broadway in September 2009, it reopened a month later off-Broadway where it’s still playing.

That longevity, and Slow Burn’s hope for success over the next two weekends, is because underneath ditties like “Everyone’s A Little Bit Racist” and the sight of naked puppets copulating, Avenue Q is meant to be a compassionate look at the frightening challenges facing young people entering the adult world in an uncertain 21st Century.

“We have to portray real situations and the (puppets) have to have real emotions,” Vandepas said. “It’s not just a kids’ show.”