Last Call: The Sounds of Success 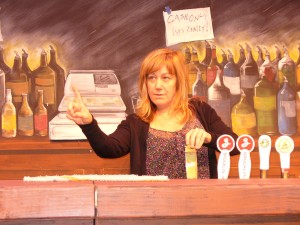 Don’t call Terri Girvin’s Last Call a solo piece when it returns to the Broward Center this week.

She’s the first to say that the precisely timed sound effects ingrained into a comic monologue about her life as a bartender make her carefully choreographed odyssey more than a one-woman show.

“I’ve always felt that there are four people doing the show. I’m just the one you can see,” she said in a break from rehearsals Tuesday with her director and two sound engineers huddled over two laptops computer controlling 748 sound cues.

Girvin’s somewhat autobiographical piece that debuted in April at Empire Stage melds monologue comedy and affecting family drama. It follows her opening up for a long shift at an urban bar, serving a steady flow of quirky customers and stopping only to field phone calls from her dysfunctional mother who wants to move in now that she’s homeless.

Girvin’s script and her genial delivery made the show entertaining on its own merits. But what stunned audiences was how Last Call organically incorporated dialogue with her invisible clients and the sound of virtually every move she pantomimed in making drinks, from plopping the ice in a glass to chopping up the limes.

“David does the sounds of the mechanics of running the bar and making drinks, the visual cues, the getting of glasses, the mixing of drinks, the cash register,” Pallazzolo said.

Hart chimed in, “Phil has the all the voice-overs (of the clients), the murmurs, everything that’s said. Phil is basically watching the script.”

“And David is watching her” hand movements, Pallazzolo said.

“And I,” Girvin said, “just try to do my best to do the same thing every night.”

In fact, that’s nearly impossible because every performance varies slightly. So Pallazzolo and Hart have to time their cues to Girvin’s vocal intonation, her physical movements and the rhythm of the show.

The final product resulted from a long gestation. The script stirs together Girvin’s lives as an actress (which is how she met Leeds 25 years ago), a stand-up comic and her ongoing gig as a Brooklyn bartender, which got her a nod in the New York Times Magazine article this month, “Women Behind Bars.”

When Empire Stage’s David Gordon asked Leeds if he had any projects in mind last spring, Leeds alerted Girvin to fine tune her play. Girvin then approached her other pal, Pallazzolo, to produce the soundscape.

He was initially stymied. “I didn’t know how to do this… I’m a record producer, and I didn’t know if it was doable. But I did research, and then I said, well, okay, I’ll build a radio play of it first. So we actually mocked it up in a studio and… then I was able to start to see how these processes could be disassembled into a live show,” Pallazzolo said.

The ensuing work was painstaking and endlessly revised. When Hart heard the sound of Girvin fixing the same drink three times in a row, he noticed that the clip of the bottle being returned to the back shelf of the bar sounded too much alike. So Hart changed the noise to sound as if the bottle was a little emptier each time.

Pallazzolo left a tape running during three of Girvin’s actual shifts so he could hear the growing and ebbing arc of noise and then “sewed” pieces of it together for background atmosphere.

“We had to fake things like a fridge opening because the actual sound wouldn’t be evocative, “Pallazzolo said.

Hart gave an example: “There’s a beer pour, that to make it more demonstrative, we sat with a garbage can and simultaneously poured three one-liter Cokes into it and that made enough sound.”

But that’s all icing on Girvin’s performance, which initially took four weeks of rehearsal. “For me, it’s just about repetition, repetition, because what I’m talking about and what I’m doing are two different things. What I’m doing has to be so super precise that it doesn’t call attention to itself, so it’s just accepted. “

That’s where it really gets rough. “I have to finish making that drink by the time this character says that so I can be in front that other person when that person says that. Now that it’s worked out, those things are in my body… muscle memory.”

But disaster is always a moment away. “I don’t think (in advance), ‘Okay, this person is going to order this.’ It’s I say, ‘Hi’ and the person tells me what to make. So I’m dependent on these guys” providing the sound cues on time. “If that guy doesn’t come in asking for that drink, I’d be like ‘uh uh uh uh.’ ”

Girvin and Leeds are making adjustments because the Broward Center has placed the show in its Abdo New River Room with a long platform for a stage and patrons sitting in tables and chairs as if it was a bar. It’s a much larger space than Empire’s 55-seat house and has better resources including a lavaliere microphone and enough lights to change the mood. “I think we had six toggle (wall) switches at Empire,” she said.

The show has been tweaked from the first production. After listening to audience feedback, Girvin moved around some sections, but also added a prologue in which we actually see her mother whose woes are fracturing Girvin’s attention during her long shift.

But even this is not the final version, she hopes. “When we did the first one, I was like, ‘We’re going to do this big experiment,’ and now this is still an experiment, but we sort of know some things now,” she said.

Leeds said, “The baby was born,  now it can walk.”

To read a review of Last Call when it premiered at Empire Stage last April, click here. 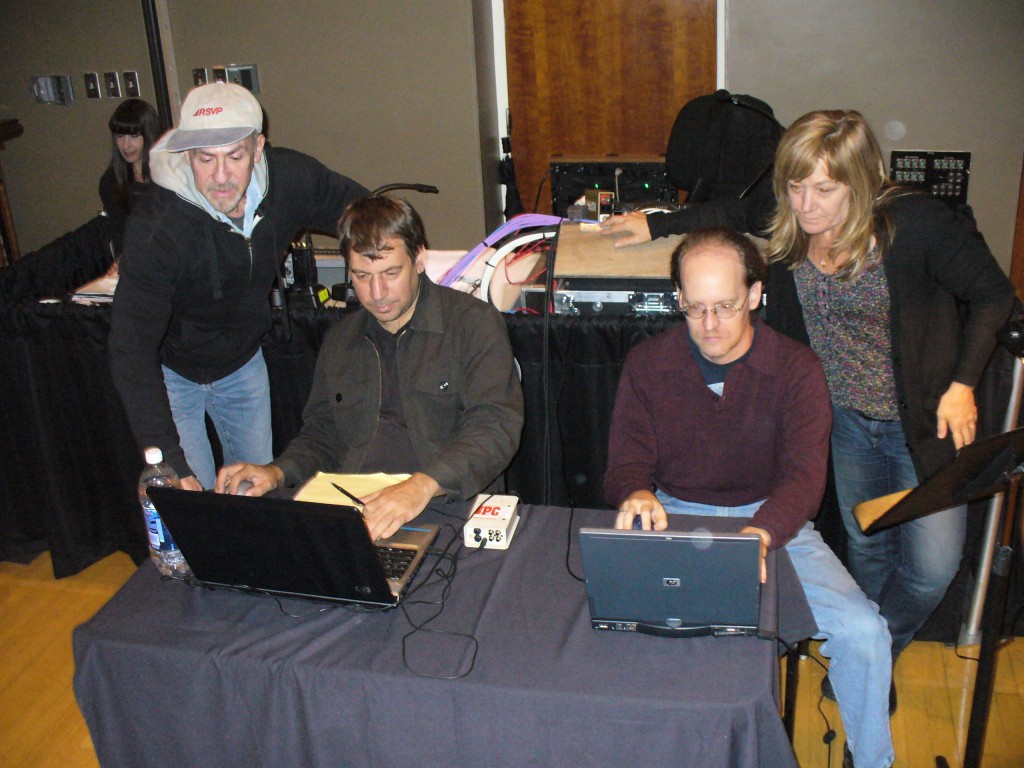 This entry was posted in Features and tagged Last Call, Michael Leeds. Bookmark the permalink.

One Response to Last Call: The Sounds of Success