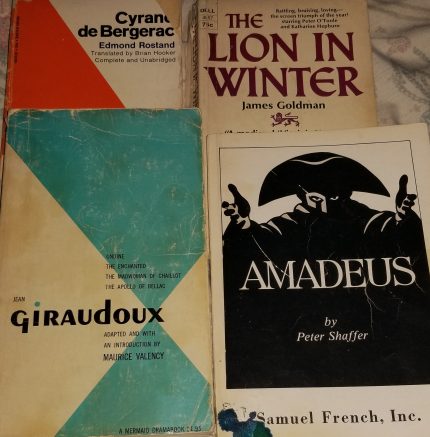 (This article, like several coming in the next few weeks, is intentionally incomplete and seeks your suggestions for additions to the lists by adding to the comment section at the end of the story or emailing me additions at muckrayk@aol.com).

For lovers of live theater, this “intermission” in communal gathering creates a hunger for more than online bare bones performances from the camera in someone’s cellphone. But there is an easy and often free venue offering unlimited production values and memorable tour de forces.

Back in the 1940s through the mid-1960s, people across the country might not make it to Broadway to see a new play let alone the revival of a classic; their community theater might not be brave enough or equal to a challenging work. But there was an alternative. And it may well be in your home right now and we’ll list specific suggestions for you in a few paragraphs from now.

Back in the day, scripts were commercially published to be read.

They were meant to be consumed in an armchair at home. Or on the bus. Or the beach. They might be a volume loaned from a library, bought at a bookstore, mail ordered from a major publishing house’s customer-tailored list, or, for the fan, delivered to the home regularly from a book-of-the-month company.

Publishers took the detailed notes from the original production’s stage manager bible, and with the playwright’s permission, inserted edifying and illuminating elements that were not in the script given to the actors, designers and director.

Indeed, some playwrights wanted to ensure that imaginative directors did not get too imaginative with their vision, so they augmented their published scripts with even more detailed descriptions. The granddaddy may be George Bernard Shaw, whom we will come back to in a moment, who included everything from costumes to set design to movement to line readings to a description of a character practically down to the arch of their eyebrow.

The result was that a reader sitting in their living room in Des Moines could use their imagination to recreate as fully-limned a theatrical experience as someone could have without actually being in the theater on West 44th Street.

Over the decades, many playwrights moved away from such specifics, thereby not discouraging directors from producing their play. Scripts in the past half-century or so have evolved more as blueprints as a starting point for a director, designers and cast, not a prescription. Speaking as someone who has read a mountain of scripts as the chair of the Steinberg/American Theatre Critics Associations new play award, it is a different experience today requiring far more imagination and effort than when I was a teenager checking out hard-bound scripts from the library.

Why hunt up these works?

First, in many, reading allows you to create the imaginary world as you want to envision it rather than being bound by an actual production.

Second, the lyricism of the language can be savored much as you would poetry — another art form optimally meant to be performed aloud.

Third, there are so many works that require such extensive and expensive production values that they are rarely done anymore and it likely will be a long time before they are done again.

Fourth, they are like an original cast album that spark memories of past productions you have seen.

Fifth, depending on the work, there are huge swaths of thought-provoking, moving, entertaining theater written and produced in the 1940s to 1960s that are very much of their time and therefore are rarely if ever revived. Some are classics, some are just solid theater meant to run a season and then close.

So what follows is a suggested sampling of works to seek out because they read so well. Some of them may be on your bookshelf, most will be available when local libraries begin drive-through pre-order service later this month, some your friend or parent might have on their bookshelf, many can be ordered online, and some of them are easily available for downloading for free with a little research online.

In no order, here are some suggestions:

—– Summon up a cultivated accent and immerse yourself in the delight-filled character comedy and unparalleled witticisms of Oscar Wilde, obviously culminating with the social satire in The Importance of Being Earnest.

—–Peter Shaffer started his career writing comedies and his wry sense of humor aimed at the decrepit class structure imbued even his most serious masterworks, Amadeus and Lettice & Lovage, there’s even a dark vein of humor in Equus. All three read even better than you remember, especially Amadeus – a show I personally ache to see done well here (no offense to the two companies who have tried it already).

—- Cyrano de Bergerac is one of my favorite plays. But for reading Rostand’s classic, opt for the older classic Brian Hooker translation, which is far more lyrical even in blank verse than the currently popular version by Anthony Burgess – Burgess being the guy who wrote that great romantic film A Clockwork Orange. Hooker’s balcony scene in which Cyrano finally can express his love to Roxanne is bar none, for me, the most romantic scene in theater. And again, with its huge cast and five acts requiring significant scenery, it’ll be a while before you see a live production anytime soon.

—-Whimsy is a quality mostly absent from modern theater. Fantasy, surrealism, theatricality, certainly. But Europeans reveled in it from the 1930s through the 1950s. Few embraced it like the French. And the two geniuses were Jean Giradoux and Jean Anouilh, once staples of theater around the world including Broadway and now virtually unknown to modern audiences. Giradoux, who wrote much of his work just before, during and after World War II, is best known for the unbridled but hilarious attack on greed and cupidity in The Madwoman of Chaillot. There’s also his Ondine and the one-act The Apollo of Bellac. Anouilh similarly gave us a fresh take on St. Joan in The Lark, non-whimsical political infighting in Becket, and “modern” romantic fantasies in Time Remembered. Whether any these would stand up well in a production in the 21st Century is debatable; they are all works from a different age and require a bit of a different expectation. But they are rewarding thought-provoking reads.

—-Again, on paper, the best storyteller, raconteur, satirist and deliverer of profound insights into human failings is Shaw. Besides his lengthy prefaces and postscripts to the admittedly lengthy plays, the scripts are amazingly trenchant reads as social criticism with a lacerating wit. From his ridicule of class distinctions in Pygmalion to the even-handed debate between morality and pragmatism in Major Barbara, Shaw has little equal. Even his tragic St. Joan. And has anyone under 70 years old taken the considerable time needed to read Man and Superman?  (I have not).  Unfortunately, few professional regional theaters produce Shaw; the last I remember locally was Palm Beach Dramawork’s Candida in 2010 and GableStage’s musical riff on The Minister’s Wife. (Once you can travel again, you can see fine productions at the Shaw Festival in Niagara-on-the-Lake in Canada.)

—- The script for James Goldman’s The Lion In Winter inexplicably has never landed on stage as solidly as you might wish, not even pulling into competition with the incomparable film version. But the stage script is superb reading and it never hurts to hear O’Toole and Hepburn’s voices in your head while you turn the pages.

—-Try anything by the Wilson twins, Lanford and August. Leisurely reading a work at home makes it possible to savor some of August’s longer and less frequently revived works like King Hedley II and Gem of the Ocean. My favorite Lanford Wilson plays are Talley’s Folly and Fifth of July, but there’s Balm in Gilead, The Hotl Baltimore and a host of others.

So please, add to this story your own suggestions either as a comment below or as an email to muckrayk@aol.com.

This entry was posted in Features, StageBill. Bookmark the permalink.