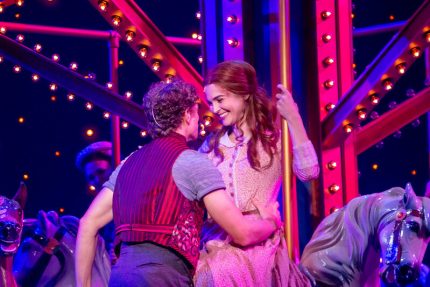 The big, emotion-charged music of Rodgers and Hammerstein’s Carousel welcomes audience, actors and artists back to Riverside Theatre in Vero Beach.

As audiences expect, the voices in Riverside’s professional production are big and the visuals are beautiful.

It begins not with an overture, but with “The Carousel Waltz.” Here, director and designer Allen D. Cornell weaves a sword swallower, eye-popping acrobatics and gaudy dancers around a beautifully wrought, working carousel, which moves to center stage and is so beautiful that at times it upstages the actors. But we don’t care because we’re so happy to be back in a live theater.

Indeed, after a two-year pandemic-induced hiatus, there is so much enthusiasm for the return to live theater, that one happily excuses a theater artist’s occasional indulgence in expressiveness and pacing.

Instead of looking at our own four walls, we go back 150 years to a foggy fishing village on the coast of Maine.  It’s a bit of a dreamscape, in which we meet fishermen and mill workers for whom a seedy carnival is a seductive respite from day-to-day world. And we can relate.

It is also where the story, based on a popular Hungarian drama, Liliom, begins. Carnival barker Billy Bigelow (splendid-voiced Jeffrey Kringer) and mill worker Julie Jordan (sweet-voiced Samantha Bruce) meet. He has given her a free ride on the carousel and slipped an arm around her waist. The woman who owns the carousel is attracted to him and knows that Julie is a serious competitor for his affections. So she does what any pre-#MeToo boss would do, she threatens to fire him.

Like Billy, Julie stays put, despite being urged home by her friend Carrie Pipperidge (a most endearing and effervescent Rachael Scarr, we want more of her, please). It’s as if the attraction between Julie and Billy has been written in the stars (foreshadowing here). They deliver splendid, two-hanky performances of the song “If I Loved You.”

But just like Romeo and Juliet, these lovers are star crossed. By the end of Act One, when the village is happily busy with life and lusty Nettie Fowler (powerhouse Beth Kirkpatrick) sings “June Is Bustin’ Out All Over,” and Carrie and Mr. Snow (a most likable Daniel Schwait) have announced their betrothal, Billy and Julie are married, without work, and living under the beneficence of their landlady. Moreover, Billy has come into the criminal influence of Jigger Craigin (a most menacing Christopher Schmidt).

Life is about to get tougher in the Second Act. Again, it’s when the town is happy and this time united in enjoying “A Real Nice Clambake,” for which Rodgers and Hammerstein reworked “A Real Nice Hayride,” an unused song in their groundbreaking musical Oklahoma! If you’ve been living in a cultural cave for decades and want to know what happens, suffice it to say that the real nice clambake ends with Nettie singing “You’ll Never Walk Alone” to a distraught Julie.

The second act is also where Carousel takes an abrupt turn. It goes from a somewhat realistic storyline and setting to something fantastical. Story spoilers here, so skip the rest of this paragraph if you want. Billy, now dead, is allowed by heavenly authorities to return to Earth for a day. He does so and meets his free-spirited daughter, Louise. Wanting to encourage her, he tries to give her a star he has plucked from the firmament. She refuses and he slaps her hand. Which then goes into the lamentable bit of dialogue between Louise and Julie when they both agree that sometimes you can be hit and it won’t hurt at all.

Like any good director, Cornell finds the problem with the play. And this moment is the Carousel problem. Cornell does a good job in preparing us for this. He begins the story with a scene where a woman is struck, and he lets the comments about Billy hitting Julie linger. So we know what is coming. Still, it’s a problem when Julie suggests that if the person who hits you loves you, then it won’t hurt. Simply put, it breaks fourth wall and we are out of the story, considering the reality of domestic abuse.

One of the best parts of this production is choreographer DJ Salisbury’s great, ebullient dance numbers, which make you feel as though a giant rubber band has just been set free in you. His use of flips, and kicks, and stomps and some very springy dance steps electrify the stage. Don’t be surprised if you tear up when Jamie Pfaff, as Louise, throttles up in one of the best dance numbers to grace Riverside’s stage.

Music director Anne Shuttlesworth heads up the splendid 12-piece orchestra that delivers. Kurt Alger’s costumes and wigs are perfect and advance character and setting. Yael Lubetzky’s lighting design paints lovely pictures, although those colorful buoys do compete visually with the actors. And Craig Beyrooti’s sound design is subtle and atmospheric.

Riverside Theatre’s Carousel is a potent way to bring us back to the theater. It will make you laugh, cry and think. But especially cry, maybe just to be back. Do bring those hankies.

Covid Protocol: Because of the increase in Covid cases in the area, the theater has posted that the CDC recommends everyone to wear a mask. Riverside has masks ready at the entrances to hand out to anyone desiring one. 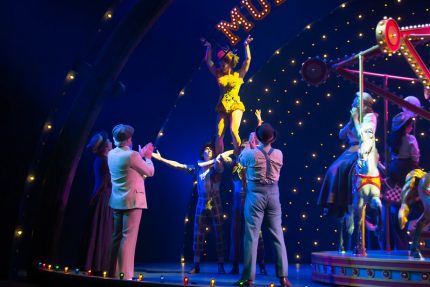 This entry was posted in Performances, Reviews and tagged Carousel, Riverside Theatre. Bookmark the permalink.