Posted on December 5, 2016 by Bill Hirschman 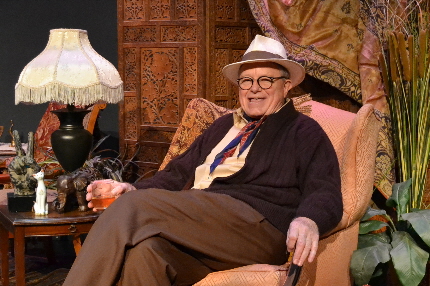 Audiences can marvel at the artistry from actor Rob Donohoe and director Lynnette Barkley in Palm Beach Dramaworks’ production of Tru, but the one-man bio-play about Truman Capote never quite touches the heart or coalesces narratively.

Donohoe, who intentionally lets any attempt at impersonation ebb early on, uses every technique he has learned in decades of performing to credibly inhabit the persona of someone who, as Capote says, first became famous for being a writer, then was famous simply for being famous.

Donohoe and Barkley are especially effective in the last third of the evening as loneliness eats through Capote’s veneer layer by layer on an angst-filled Christmas Eve, forcing him to struggle not to indulge his alcoholism.

But Jay Presson Allen’s 1989 script – in which Tru directly regales the audience with stories of his life – meanders and flits like a honeybee with ADD. It might reflect Capote’s fractured mental state, but it fails to build a coherent arc and thereby robs the actor of a clear character development or life-changing realization. When Tru girds himself at the finale to enter the outside world, there’s no sense how or why or if he has turned any emotional corner. What Allen and Dramaworks have given us is an eavesdropping portrait of a moment in time, not a biography.

The play visits Capote on the day before Christmas Eve 1975 in his East Side apartment with a gorgeous view of twilight over the Chrysler and Empire State buildings.

His creative life is foundering. One of the finest American writers of the 20th Century is aware that he is now best known now for his celebrity: “The only thing being famous is good for is cashing your checks in a small town.”

And now matters have reached a tipping point. A chapter of his never-to be-finished novel Answered Prayers has been published in Esquire. Its thinly veiled depictions of some of his closest friends in New York’s high society has enraged them as a betrayal of his long-standing status as their confidante and lapdog. Several including “Babe” Paley and “Slim” Keith have cut him off dead. This matters because from Tru’s point of view, they were among his closest friends.

On one level, he claims to be mystified at their feelings of being betrayed. After all, he avers, he is an artist and any friend of an artist knows everything is grist for the mill. But deeper down — and he never quite acknowledges this but must know it subconsciously — he has abused their trust as he has often used people around him in the past.

And now instead of being invited to their holiday celebrations, he is nursing his wounds in his abode, nervously occupying himself with minutia, playing jazz on the cassette player, happily schmoozing on the phone with second tier buddies, even talking to himself, which is the conceit that explains why he is recalling vignettes from his life for imaginary visitors, us in the audience.

His jocular repartee on his lifeline telephone or speaking to us is peppered with crafted wit like, in dissing a floral gift, “Poinsettias are the Bob Goulet of botany.” His twittering laugh shows no one appreciates his jokes more than he.

Capote is also his own best publicity agent: “I have lived an astonishing life and I’ve known everybody.” He, indeed, frequents a rarefied world. He does not namedrop, but in telling stories about his acquaintances and intimates, he knowingly breezes past boldface names like Princess Margaret, Marilyn Monroe, Swifty Lazar, Gloria Vanderbilt, Lee Radziwill, Johnny and Joanne Carson.

But underneath the bonhomie, Donohoe and Barkley let us glimpse his depression and isolation – self-inflicted, he knows – gnawing at him. Initially referring to the tchochkes in his living room, he also glances off his ego-enhancing dependency on these socialites and powerbrokers: “You can’t really own anything. You can never own another person.” Then he pauses. “But a person can own you.”

Donohoe is a fine actor who has proven his stunning range at Dramaworks from the quiet terror of the cultured well-to-do houseguest in A Delicate Balance to the grizzled dying reprobate in Buried Child. He said in an interview that he was not trying to do a nightclub impersonation of Capote. But he has worked hard to try to summon elements familiar from Capote’s television appearances including the iconic fey, high-pitched Southern inflected voice as well as gestures such as emphasizing the absurdity of a point by arching his body to one side like a broken jack-in-the-box and throwing out his arms. As Donohoe loses himself in the character, the externals of Capote fade away, leaving us a fascinating character who is no longer the popular image recalled from talk show stints.

Donohoe does succeeds completely at highlighting the inner turmoil under the public façade, a man conscious of being “an outsider with privileged access” to the world of the super-rich. But his Capote’s ego apparently has fooled him into believing that those relationships were unshakeable. And now he realizes how wrong he was and how much his self-worth was predicated on them.

To read an interview with Rob Donohoe and Lynette Barkley, click here http://www.floridatheateronstage.com/features/becoming-truman-capote-at-dramaworks-rob-donohoe-transforms-himself-inside-out/