FGO’s Thais Is Equally Lovely With Or Without Voices 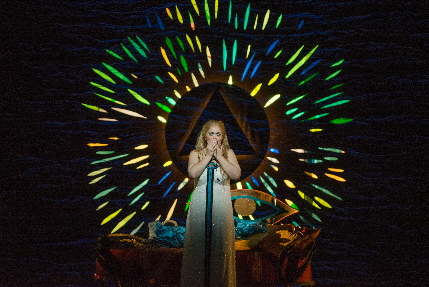 Although Eglise Gutiérrez’s performance in the title role of Thais is indeed glorious, equally fascinating in the current edition at Florida Grand Opera is what happens when no one is singing.

Unlike many other operas noted for wall to wall vocals, Jules Massenet’s score provides long passages such as the famed violin-dominated “Meditation” section as Gutiérrez struggles silently with her dilemma, or the third act stretch when an awe-inspiring storm rolls across the unoccupied stage with the orchestra’s roiling tumult accentuated by thunder and lightning.

In each case, stage director Renaud Doucet, set designer André Barbe, lighting designer Guy Simard and conductor Ramón Tebar combine their talents to provide visual and aural tableaus of power, beauty and stirring emotion – something missing from so many stilted operatic productions. This isn’t to give short shrift to the singers: In a few cases, Massenet allows characters to sing a cappella such as a when the monk is praying to God at sunrise in the desert and a quartet blends together later in a palace.

Thais is famous but not often mounted because of the demands on the lead soprano; among other challenges, she has to hit a D flat over high C. So FGO’s 73rd season and the first full season under General Director Susan T. Danis is bookended with rarely-done works – starting last fall with Marvin David Levy’s Mourning Becomes Electra.

Based on Anatole France’s anti-Catholic novel, the plot set in 4th Century Egypt opens with the Christian monk Athanaël who is obsessed with converting Alexandria’s most noted courtesan Thais. But this collision of the supposedly profane and the supposedly sacred. Eventually, Thais’ decent heart is persuaded that the eternal love of God is superior to the transient pleasures of beauty and carnality. Meanwhile, Athanaël’s deeply disturbed id strays further and further from holiness until Thais is welcomed into Heaven as a saint and Athanaël
is revealed as a spiritually shattered hypocrite.

Gutiérrez, who shares the role with Angela Mortellaro in her FGO debut, raises the level of the production every time she opens her mouth. Thais’ purity flows vocally from Gutiérrez like sweet water pouring from one crystal goblet to another. Her higher trills may not have power, but they are ineffably delicate. She brings an introspective tone to the famed aria “Dis-moi que je suis belle” (Tell me that I am beautiful) Especially noteworthy was her acting; she made Thais’ gradual conversion completely credible – an especially difficult assignment in persuading a 21st Century audience.

Baritone-bass Kristopher Irmiter has the requisite comfort with the deeper register for Athanaël, although his acting was far more moustache-twirling melodramatic. But the character is written as a sadistic and tortured soul so Irmiter has to play what he’s given.

Tebar, who doubles as music director for FGO, once again leads his orchestra in making the most of Massenet’s lush, seductive score, which – we keep saying this – will be echoed in later film music of the 1930s and 1940s. The string sections are fluid, the reeds are martini-smooth, the horns are muscular and the percussion provides the exotic tone needed to evoke a foreign time and place. The famed “Meditation” – often programmed out of context in other orchestral settings – is delivered beautifully with a tender, evocative rendition by concertmaster Scott Flavin who gets a well-deserved onstage bow.

Canadians Doucet, Barbe and Simard have often worked together for FGO and they have a recognizable look: highly-stylized but spare visuals that rely on stagecraft rather than opulence to create a mood. In this case, the sets originally used in St. Louis and Montreal include a huge golden Eye of Horus engraved with hieroglyphics forms the proscenium, framing another huge eye that is presumably the eye of God. Some of the imagery is imaginative: In her conversion, Thais’ pagan symbols give way to a simple triangle symbolizing the Trinity.

In the opera, Thais deserves a lot better treatment on Earth than she gets, but the opera gets as good a rendition as it deserves.

Thais from the Florida Grand Opera plays at the Adrienne Arsht Center for the Performing Arts, 1300 Biscayne Blvd., Miami, through Saturday at 8 p.m. Then it moves to Broward Center for the Performing Arts, Au-Rene Theater, 201 SW Fifth Ave., Fort Lauderdale at 7:30 p.m.  May 15 and 17. Tickets start at $21 in Broward and $11 in Miami and top out at $200. Supertitles in both English and Spanish. Running time about 3 hours including two intermissions. Call (800) 741-1010 or visit www.FGO.org.