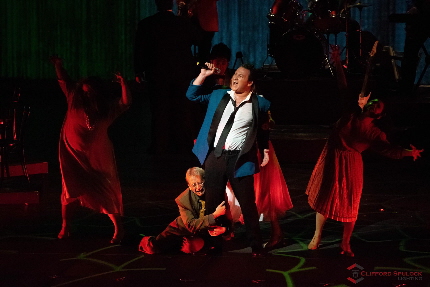 The Wedding Singer musical is a lively winning goofball vibe poking good-natured fun at that geological era known as “The ‘80s” in the inaugural offering of Jolt Productions, a professional company in Boca Raton.

Nearly every troupe tackling this 2006 musical wisely has avoided trying to replicate the slightly demented feel of the 1998 film inescapably invested by its star Adam Sandler.

Instead, the Jolt outing helmed by founder Lauren Anastasi makes the most of the wry, ribald yet compassionate script with an engaging cast, who throw themselves into the evening with complete abandon. The production values may be limited by the budget, but the entertainment value is hard to resist.

Robbie Hart is a doofus of an overaged Lost Boy living in his grandparents’ basement who is losing faith in his dream of being a successful songwriter. His day job is guitarist and emcee of a rock band who entertains at weddings in suburban New Jersey banquet halls. The band specializes in the “latest” music of the mid-1980s, tamed down for middle-brow customers.

Robbie’s appeal is that he is so obviously in love with the glory of true love itself.  This comes clear when, playing a gig the night before his own wedding, Robbie meets the waitress Julia Sullivan. She joins him on break to help him write a quirky dopey love song that he wants to play the next day for his beloved.

But Robbie’s shallow fiancée Linda sends him a Dear John letter as he stands at the altar, sending him into a hilariously overwrought tailspin. It culminates in Robbie unloading his uncensored bitterness during the band’s next wedding gig with a toxic song claiming that no one in the room has a true relationship.

Julia has been dating and finally gets engaged to the self-involved Wall Street boor Glen who cheats on her and mistreats her. Of course, Robbie and Julia fall in love and what ensues is pretty predictable as the star-crossed lovers keep getting their wires mixed by ludicrous misunderstandings until the joyous finale.

The film drew heavily on the actual songs from the period, but the musical’s pastiche score by Matthew Sklar and Beguelin (Elf and the current hit The Prom) wittily echoes “the soundtrack of your life” without actually quoting any existing song. The music features roaring rock anthems with raging guitar riffs and lovely ballads.

The script by Beguelin and the original screenwriter Tim Herlihy is chock full of archeological digs at the pop culture of the time, which will register with older audiences more than younger ones  One character asks “where’s the beef?” and another references “caviar dreams from Lifestyles of the Rich and Famous.” A Las Vegas wedding chapel is overseen by a Ronald Reagan look alike and the witness is a Billy Idol impersonator. Even better, the junk bond trader who has no problem with insider trading has one of those new cellular phones with a receiver the size of a brick tied by wires into a battery the size of a purse.

Anastasi locates and maintains the wacky groove, musical director James Weber gets the best voices out of the cast as they work with a digital tracks, Sara Perry Beneventano’s choreography perfectly mirrors the aesthetic of the period, Jerry Sturdefant nails the period costumes, Traci Watkins gets the best sound you may ever hear out of an educational auditorium since the venue is the Olympic Heights Community High School, the roll-on set pieces by Mike Versetti enhanced with a procession of evocative computer projections in the back scrim by Paul Kane.

So why are we mentioning all these names? Most of them you’ve never heard of unless you study play programs.

The point is that the ability of many of these artists, arguably most of them, range from auspicious to pretty darn good. Their program bios show most are recent college grads with arts majors whose credits mention show titles but rarely a specific role or a theater unless it’s one of the small struggling or defunct companies.

What this illustrates is that there is an entire layer of professional performing artists and designers in this region who, like Jolt itself, carry a great deal of promise for the future of theater in South Florida. Yes, many could use more time on the boards to hone their craft. But companies like Jolt, Measure for Measure, Marquee Theater Company and others are providing a place for them to do just that.

So just as companies like Slow Burn Theatre, PPTOPA and the late Broward Stage Door among others were successful post-graduate petri dishes for talent, so are these nascent troupes developing the next generation of theater practitioners.