McCraney’s Streamlined Hamlet Embraces The Music of the Bard 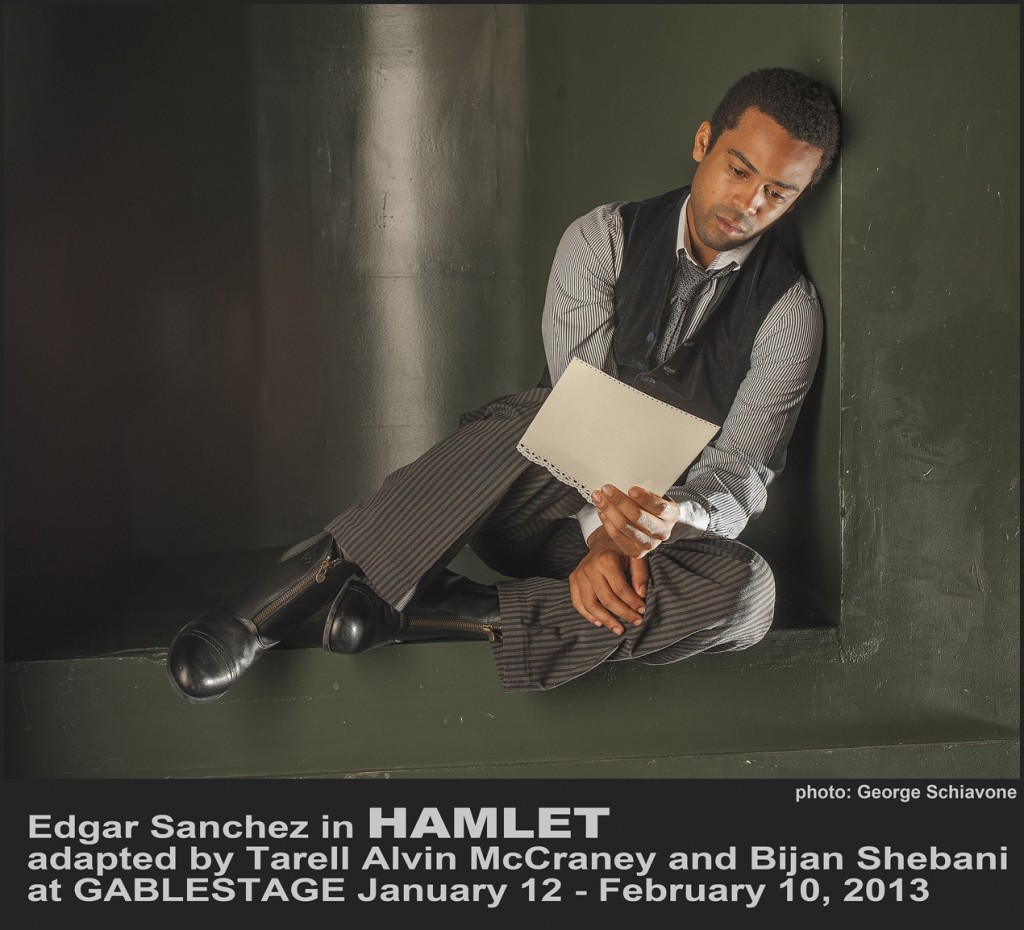 The miracle of Tarell Alvin McCraney’s streamlined Hamlet at GableStage is that even after surgically slicing two-thirds of the script, the result remains not only effective theater but pure if distilled Shakespeare.

This vibrant and youthful Hamlet honors the music of the Bard’s language by using solely his words edited by McCraney and Bijan Sheibani. But director McCraney places an equal premium on actors communicating a line’s meaning rather than being mindlessly captive to the poetry, a virtue reminiscent of Kenneth Branagh’s films.

That will be crucial because this 85-minute stylized version may entertain adults but it has been adapted specifically to be accessible to younger audiences when the show tours Miami-Dade next month for free shows for students.

Yet even though it’s built for speed, this 85-minute version never feels rushed, just smoothly moving forward like a river. In the title role, former Miamian Edgar Miguel Sanchez sets the tone by caressing the rhythm of a phrase, taking pauses and excavating the intent.

The key soliloquies are here and many of the oft-quoted phrases, but Hamlet lovers will easily spot wholesale cuts such as Polonius’ fabled advice to the departing Laertes. Fortinbras and Marcellus are AWOL. The punny Gravedigger is off in a different cemetery. Still, there is not even a whiff of a dumbed-down Classics Illustrated approach. The cleanness and clarity after having pared away the verbal curlicues and fripperies just highlight the magnificence of what’s left.

People familiar with Hamlet won’t be able to tell whether all the cuts also excise the play’s plausibility for newcomers as characters’ temperament pivots instantly and plot points fly past in a few words. Is it clear that Hamlet is feigning madness, then may actually go mad, then regains his wits? You’ll have to ask the 10th graders next month.

McCraney created this two years ago to tour British schools during his residency for the Royal Shakespeare Company, so there’s no question that he venerates Shakespeare. But he embraces the tradition of theater artists using the text as a foundation from which to execute their individual vision even if it means deviating from the norm. In the very first moment of the play, Sanchez arises from the floor and delivers the “To be or not to be” soliloquy, which actually occurs in Act III. It’s an intriguing choice since its content sets the tone for the entire play.

McCraney revels in playfully mixing influences. Rosencrantz and Guildenstern prance about like refugees from commedia delle’arte. The Player King and Queen declaim some of their speeches in passionate Spanish and then in English. Miami’s multi-culturalism is reflected in the compact cast of 11: African Americans, Cuban Americans, Afro-Cubans, Anglos and a Dominican. Ellis Tillman’s costumes seem to set the play in the late 1920s – the only sense of time and place in the production.

A capable cast is led by an especially impressive Sanchez as a vital young man driven by a mission of revenge and consumed with guilt over his reticence. Wilier than most of the people around him, Sanchez’s canny Hamlet masks the churning bile with a warm, broad smile.

Sanchez, who has performed in Shakespeare around the country, is completely comfortable with the verse, but his voice retains a bit of the street in its timbre, which should make it seems less stilted to younger audiences. He also looks, sounds and acts like a Wittenberg University student rather than a middle-aged actor pretending to be young. When he lifts a military-style knife in the air and proclaims his post-ghost vow of retribution, it sounds like someone on the street corner swearing a reprisal.

The cast is comprised of either South Florida residents or former Miamians.  Among the standouts is veteran Peter Haig who skillfully makes Polonius more of a self-important politician than the characterization of a fool that some actors stoop to. He’s been looking for a while for the right role and the right director; given this chance, he displays all the accumulated skill and technique that come from his extensive experience. His grizzled voice nimbly negotiates some of Shakespeare’s more sadistic wordplay.

The same goes for local educator James Samuel Randolph who has performed Lear and Othello for New Theatre. His sonorous voice and his facility with the verse serve the robust Claudius well enough. But those gifts are especially effective when his ghost strides across the stage seemingly nine feet tall with a voice emanating from the bowels of Hell. Like Sanchez, he lets the material breathe and his attention to the intent of a line means the ghost’s speeches make far more sense than in most productions.

The surprise was Ryan George, another Miamian who McCraney cast in 2011 as the likeable if hapless ex-con in GableStage’s The Brothers Size. Tall, wiry and with a shaven pate, his fey Rosencrantz was passable, but his Laertes is arguably the most dynamic force on the stage. Shakespeare’s words spewed out of him with a clarity and passion that amped up the energy on stage.

Alana Arenas, a former Miamian who is part of Chicago’s Steppenwolf ensemble, makes Gertrude a cross between a royal consort still open to afternoon delight with her new husband and yet maintains the decorum of a lady wearing a different kind of crown to an AME church social. Unfortunately, the cut-down script robs her of enough time to register as a full-blown character.

Filling out the cast are Mimi Davila as Ophelia, Dylan Kammerer as Horatio, Arielle Hoffman as Guildenstern and Osric, and a solid trio of New World School of the Arts students Laura Di Lorenzo, Michael Napoles and Alfie Ramirez  who not only play anonymous courtiers but have heavy lifting as the travelling players.

McCraney’s staging is relatively spare and straightforward, although he inserts  visual touches such as using a long blue winding sheet to represent Ophelia’s grave. He chooses to have Sanchez speak the soliloquies directly through the fourth wall to the audience as if he was explaining himself to a friend rather than speaking to himself. He also uses Jeff Quinn’s lighting to handle most of the scene changes with cinematic fluidity. Matt Corey enhances the mood with imagistic and slightly surreal sound cues.

McCraney’s only misstep is coping with GableStage’s weird logistics: a wide shallow seating area in relation to the stage. Therefore, when McCraney situates many scenes far downstage center, patrons on the sides of the auditorium must have felt a bit left out, although it was startlingly visceral for those in center. But those in the center had trouble when McCraney would station two characters in the same scene at opposite ends of the stage. Some audience members had to snap their heads back and forth like spectators at a tennis match.

South Florida theater rarely performs the classics, in part because there doesn’t seem to be an audience appetite for it and in part because most productions are discouragingly mediocre at best. So even slimmed down, this well-executed Hamlet should be welcomed both by lovers of Shakespeare and young people who wonder what all the fuss is about.

To read an interview with McCraney about this production and his other plans, click here.