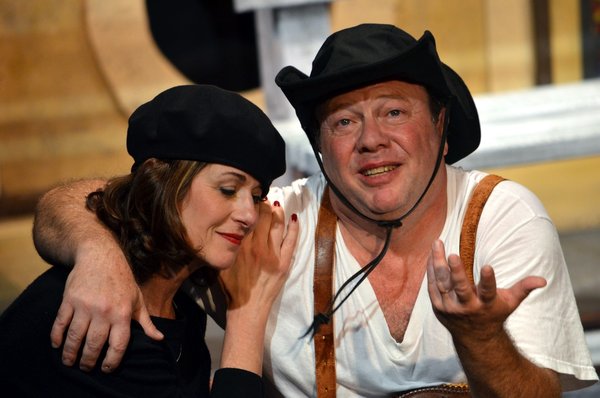 Back during the Cold War, a theatrical genre flourished called the American absurdist comedy. Perfected by Herb Gardner and Bruce Jay Friedman, it took hip unconventionality to an extreme degree of kookiness, one crucial millimeter short of being a living cartoon.

Perhaps the most popular entry was Murray Schisgal’s hilarious Luv, hauled out of mothballs this holiday season by the fledgling Plaza Theatre in Manalapan for an older audience that remembers the original production in 1964.

While this production is hardly the best this warhorse has ever seen, director Andy Rogow and his cast Avi Hoffman, Patti Gardner and Steven J. Carroll have done a   skilled job finding and recreating the right groove. Employing every shred of comic imagination they have and embracing the requisite manic daffiness with an unselfconscious abandon, this quartet does justice to this deceptively difficult and dated piece.

Tone is critical because no one writes precisely like this anymore and hasn’t for decades, even though absurdist humor has now become the standard for all modern comedy. This is different. It’s as if Mel Brooks and Eugene Ionesco had produced a love child.

The plot, more of a comic set up, is that scrappy but successful entrepreneur Milt Manville (Hoffman) is walking across a New York City bridge when he spots his old college classmate Harry Berlin (Carroll) preparing to jump into the water.

Harry’s life has spiraled down to where he wears a rope for a belt. The perpetual misfit is such a failure and his life is so lonely that he wants to put himself out of his misery. Milt’s life has had the opposite trajectory, thriving as a stockbroker by day but, anxious hondler that he is, scrounges trashcans for valuable bric-a-brac at night. But Milt is miserable as well. His wife, Ellen (Gardner) won’t leave him and allow him to pursue his young mistress, a situation Milt has asked Ellen to come to the bridge ostensibly to discuss. Referring to both women, Milt says, “I’m more in love today than the day I was married — but my wife won’t give me a divorce.”

You can almost see the lightbulb switch on in Milt’s eyes: Harry, love will solve all your problems. So, why don’t you take Ellen off my hands? The fact that Harry accepts the proposition and that he successfully woos the straight arrow Ellen is emblematic of Schisgal’s willfully implausible sensibility. And that’s just the first act.

Buried deep in this genre, solidified in sketch routines by Mike Nichols and Elaine May, were nebulous messages about the anxiety-inducing world of urban neuroses that was changing seemingly every week. But mostly, it was the next step in a stylized evolution of the vaudevillian-Borscht Belt-1950s humor, which had reached a pinnacle previously in Sid Caesar’s Your Show of Shows.

One of the funnier and yet now-familiar bits is when Harry and Milt compare poverty-stricken childhoods in a running competition of one-ups-manship such as (paraphrasing here): “Shoes? You had shoes? I couldn’t go to school until I was eight years old because I had no shoes. And then I could only go because the boy downstairs was hit by an ice cream truck.”

The key is the ability to sell hoary routines as if you’re merchandising a map to a pot of gold. Of course, this material is right in Hoffman’s wheelhouse and he luxuriates in it like a latter-day Caesar, Gleason or Mostel. The only living person in this club besides Hoffman is Nathan Lane. Hoffman pulls it all out of his trunk of tricks: double takes, gleefully breaking the fourth wall, gleaming glances directly to the audience while delivering a dry one-liner, a face as mobile and rubbery as his legs, timing so dead-on in line readings that you can almost hear the rim shot.

Local favorite Gardner has long been associated with musicals and straight plays, but Luv is a reminder that she has delightful comic chops. She has the toughest role because she hasn’t got permission to mug like the men do, although she too is so frustrated with Milt that she seems to be missing a few marbles. There is no straight man in this piece but she’s the closest thing there is to someone grounded in reality. Ellen is a lovely, stylish lady clad in mink, so it’s a major accomplishment that Gardner makes nearly plausible Ellen’s falling for Harry and her adoption of a Bohemian lifestyle. All she has, and what Gardner does so well, is express the pent up rage at the unsatisfying reality that her storybook marriage has devolved into.

Carroll is a New York area actor who moved to Florida in 2006 and has worked primarily in central Florida since, other than a turn as a Catskill comic in the Plaza’s recent Breaking Up Is Hard To Do revue. Tall with a shock of unruly sandy curls, Carroll’s Harry is delightfully woebegone with a look of studied earnestness in those demented blue eyes like Peter Falk in the film The Great Race. When Harry goes stiff as a board in chronic fits, Carroll is as funny as when he galumphs around the bridge.

Rogow, artistic director of the new Island City Stage, led the cast in nailing that elusive tone. He also keeps the pace moving forward so that the show never drags. Plus, he injects a few decades of experience into creating scores of zany comedy bits.

Some audience members are going to be unenthused by this museum piece, but if you let yourself ride with it, you’ll find yourself laughing in spite of yourself.

Luv runs through Dec. 30 at The Plaza Theatre, 262 South Ocean Boulevard, Manalapan (the Ocean Blvd. bridge is closed for two years; come across the Intracoastal Waterway by Lake Road on the north or Boynton Beach Blvd. or Woolbright Road on the south, allowing a little extra time for slow traffic on A1A.)  Performances 7:30 p.m. Friday-Saturday, and 2 p.m. Saturday-Sunday. Tickets $45.  Call (561) 588-1820 or visit theplazatheatre.net.