How To Gain 600 Pounds In Five Minutes: Gablestage’s The Whale 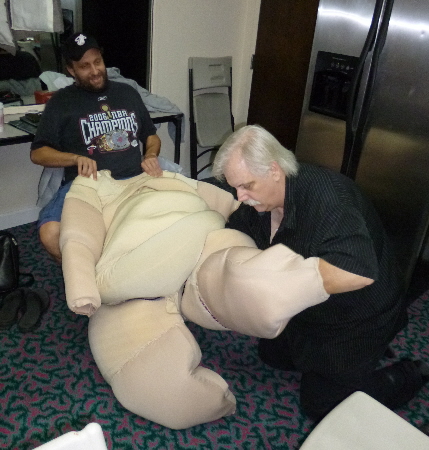 A five-foot tall assembly of beige bags hangs in the corner of Gablestage’s cramped communal dressing room, vaguely shaped like a headless person or a tan version of the marshmallow monster from Ghostbusters.

No one has yet christened this fat suit created for the upcoming production of The Whale, but even without actor Gregg Weiner inside it, it feels like it’s a character itself.

Certainly, Weiner, who plays a morbidly obese man who is dying, has gotten to know the 45-pound costume well over the past three weeks including rehearsing in it from the second day of blocking.

“It informs my movement. Getting out a chair is difficult every time. Just walking,” Weiner said Wednesday alongside the costume’s designer Ellis Tillman. “The first few days in rehearsal, I would turn around and my butt would bump into other people.”

Samuel Hunter’s 2012 script of The Whale is a drama filled with dark humor and an ultimately uplifting message of hope. It revolves around Charlie, a curmudgeonly 600-pound educator who is confined to his slovenly apartment and earns his living by editing and critiquing college students’ essays by computer.

Charlie is dying of congestive heart failure but rebuffs attempts by his caregiver and friend to persuade him to take steps to extend his life. Instead, he tries to re-establish connections with the disaffected teenage daughter he abandoned years earlier and, to some degree, with his ex-wife. During the course of the play, Charlie not only learns things about himself, but manages to affect the lives of several people around him.

Up-and-coming playwright Hunter (A Bright New Boise) never makes fun of Charlie’s obesity; so while the play is often funny, Tillman’s job was to make Charlie’s appearance absolutely realistic and Weiner’s to make him believable. 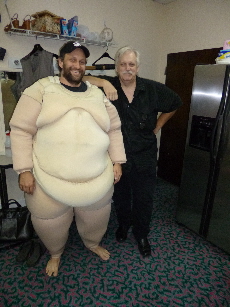 Weiner and Tillman knew this would take time, so they began the process when both were working in May on Actors’ Playhouse’s Scott and Hem in which Weiner played Ernest Hemingway.

Multiple Carbonell-winner Tillman is likely the busiest costume designer in South Florida providing wardrobes for nearly every show at Gablestage and Actors Playhouse in addition to assignments at other theaters locally and around the nation. He has experience with adding weight or prosthetics such as increasing the silhouette for Tracy the heroine in Actors Playhouse’s Hairspray and breasts for David Arisco, the man playing Edna, her equally plus-sized mother. But this assignment went far beyond those. 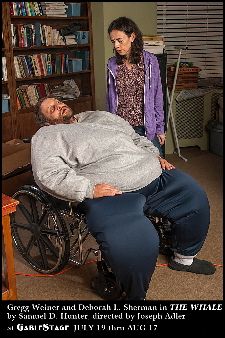 Tillman said he researched the look with photographs, but, he joked, “I really just looked in a mirror.” One thing he realized was in reality, many fat people aren’t always fat everywhere on their body.

Then he began building the costume around Weiner. He created essentially a series of connected bags made of foam rubber that were filled either with a special fiber or silicone pellets used to fill dolls. Over the weeks, the suit was tweaked such as enlarging that pesky posterior. The fat suit is covered by a vest with four large pockets where ice packs are inserted to try to keep Weiner’s body temperature under control.

Meanwhile, Weiner was studying documentaries on Netflix about obese people to see how they move and breathe. He didn’t finish some of the films, he noted, because the stories were how the protagonists lost weight – which wasn’t relevant here.

He attempted to get inside Charlie’s psyche, which he exposes by being charming and off-putting in the space of a few seconds. “I can never really know what it’s like” to be obese, Weiner said. “Charlie is an addict and he’s sort of given up” on surviving. But “this is not about an obese man who is dying. Every person in this play has positive growth. It’s beautiful.” For instance, “when people are dying, they evolve; they appreciate things like family,” something Weiner said that he saw in his final weeks with his own father.

It only takes Weiner about five minutes to slip on the suit with a little help and then get zipped up in the back. Then he applies dark shadow under his eyes and a little white makeup to create Charlie’s terminal pallor. He tops it off by donning an enormous pair of off-the-rack sweat pants emblazoned with the word Reebok and a T-shirt size 7XL. Maybe 15 minutes total.

When he began wearing it to rehearsals, the sight of Weiner waddling around also helped the other actors form how they relate to Weiner’s character.

Just for fun, he and director Joseph Adler slipped into the employees’ cafeteria at the Biltmore Hotel, which is adjacent to the theater’s dressing room. “People just looked at me out of the corner of their eye,” Weiner recalled. And once he had unnerved them visually, he shouted out, “I’m starving!”

The costume does impose physical challenges. So far in rehearsal he hasn’t sweated as much as someone might expect, although the body heat of a full house and stage lights after opening night may change that. The play is written without an intermission as it will be done here, but in the world premiere at the Denver Center Theatre Center, the stress of the fat suit on the lead actor required that the play be done with a break. Weiner’s not overly worried, although he admits to being winded by the effort on stage.

Weiner has been trying to stay in shape at about 220 pounds, well below the 253 he reached when playing in Mosaic Theatre’s acclaimed The Seafarer in 2008. He bicycles a good deal these days and watches what he eats, such as limiting himself to half-breakfasts and salads. “I can’t go to McDonalds before the show,” he quipped. He also can’t drink a lot of water to hydrate before the show because the logistics of visiting the bathroom are limiting.

After the show, Weiner gets to go home. But the fat suit is cleaned up, hung up on the same clothes hangar that was used to hang Edna’s costume to air out. As a final treat, the suit ends its night being sprayed with vodka – a traditional and effective way to kill bacteria. 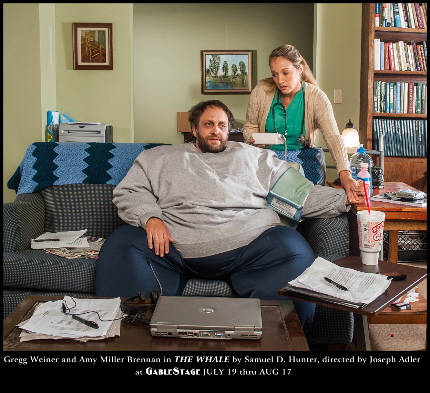 This entry was posted in Features and tagged Ellis Tillman, Gregg Weiner, The Whale. Bookmark the permalink.