Wick’s White Christmas Melts The Snow Bank In Your Heart 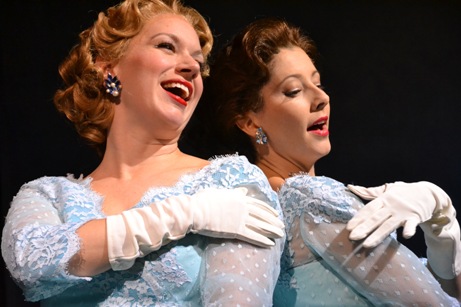 There’s a warm and comforting triple promise in The Wick Theatre’s pre-Thanksgiving production of the musical White Christmas.

True, scenery pieces bumped into each other opening night, some voices missed the pitch occasionally and numerous tech cues were missed, but those flaws will evaporate. What will be left are a thoroughly pleasurable and diverting couple of hours delivered by a corps of talented professionals luxuriating in the show’s gold standard element:  unforgettable songs by Irving Berlin.

Even now, those glitches are overwhelmed by standout memories such as Julie Kleiner and Cannon Starnes leading a line of tap dancers in the showstopping rendition of “I Love A Piano” that jumpstarts the second act with a jolt of energy.

Or Kelly Shook as the heartbroken heroine who thinks her new love has feet of clay, singing the torchy “Love, You Didn’t Do Right By Me.”

And, even given that the theater is an outgrowth of Marilyn Wick’s Costume World, the wardrobe chosen by the show’s director Stacey Stephens is truly spectacular with gorgeous gowns and sparkling dance outfits.

White Christmas is a faithful 2004 adaptation of the 1954 Paramount film starring Bing Crosby and Danny Kaye as song-and-dance men romancing the sister act of Rosemary Clooney and Vera-Ellen.  The show had several productions including holiday runs in New York in 2008 and 2009 staged by Walter Bobbie who mounted the Chicago revival.

While the show features a disparate collection of Berlin’s trunk songs  — the film borrowed the title number from the film Holiday Inn 12 years earlier – they were woven deftly into a real story. In the decade since World War II, ex-GIs Bob Wallace (James Cichewicz) and Phil Davis (Starnes) have become Broadway stars and producers, now about to rehearse their new show in Miami. But Phil falls for Judy (Kleiner) half of a sister act with Betty (Shook), and the boys end up in a Vermont resort where the ladies are booked. Wouldn’t you know it, the failing resort is owned by their own ex-general (Alan Gerstel) and run by his loyal but acerbic aide-de-camp (Missy McArdle). To save the resort and the flagging spirits of the general, the boy and girls bring the new show up to Vermont, invite the entire military company to be the audience, and managed to overcome various obstacles to true love before the title song is sung with snow falling outside the general’s barn-theater and inside the Wick audience chamber.

The success of this work, like the movie, depends on a quartet of lead actor/singers who effortlessly exude a personality that would enchant the stoniest heart. In that, director Stephens has perfectly cast his two sets of lovers, from the square-jawed charmer Cichewicz and loose-limbed whimsical Starnes to the lovely if skeptical Shook and, best of all, the effervescent Kleiner.

Stephens wisely keeps his cast from summoning even a whiff of the famous film predecessors’ style, which allows the actors to make the roles their own and prevents the audience from making comparisons. Still, it’s really, really difficult not to hear Crosby’s inimitable mellow croon of “Count Your Blessings” or the Clooney/Vera-Ellen duet on “Sisters.”

All four do a fine job, especially Cichewicz singing just about anything from “Blue Skies” to the title song. But somehow it’s Kleiner (we didn’t know she could tap dance like that) who gives that extra little English on the ball with a 300-watt smile and a bit of topspin on her line readings. 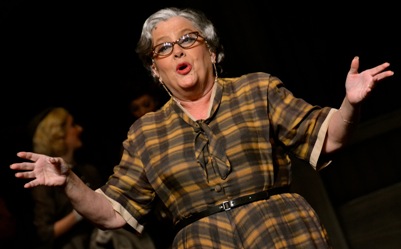 Still, the most crowd-pleasing performance is McArdle as a fifty-something Broadway almost-star now incognito keeping the inn running despite a mountain of bills among other headaches. She unleashes a Merman belt on the song “Let Me Sing and I’m Happy” and a host of whipcrack wisecracks that sound like Thelma Ritter come back to life.

A nod is due to Alan Gerstel as the crusty old general. His moments of barking at civilians as if he were still in uniform is a bit of a stock characterization. But the general has two moments directly addressing the troops, in the prologue set in the middle of the war, and at the end when they return a decade later to honor him. In both, Gerstel just nails this career military man gently peeling away his tough hide to reveal a loving and humble man. They are the most touching moments in the entire show and they’re due directly to Gerstel’s work.

Rounding out the cast is Bianca Matthews as the self-possessed granddaughter Sue/susie/Susan and Randy Charleville as the hard-charging agent who’s only missing the cigar protruding out of his mouth when he talks.

Stephens’ direction is smooth and nearly invisible. He and choreographer Wendy Hall use the aisles and even the top of the low wall in front of the loge as performing space.  Musical director Michael Ursua guided the cast  through the iconic numbers making them sound both fresh and familiar at the same time.

The only problem worth kvetching about is the dancing in general. Every person on stage is far better at this than we are in our dreams. But other than the “I Love A Piano” number, every other piece may have fine Broadway/Hollywood style moves by Wendy Hall, but the execution, at best, lacks a crispness and precision, and, at worst, seems sloppy and ragged. If there’s a dance captain, he or she needs to crack the whip.

Tom Hansen, the Tampa-based scenic designer, did a lovely job with the Wick’s inaugural The Sound of Music, but his work here is a cut or two less impressive. Maybe it’s budgetary because Sound of Music really had only three or so basic sets while this one has three times that many locations, But when “Blue Skies” is danced in front of cyclorama washed with blue light, you feel a little cheated. On the other hand, some of the sets are far nicer than what many local company can or would pay for.

Once again, the orchestra is digital but the Wick’s refurbished sound system and the quality of the “performance”  of  Lance Blank’s orchestrations provides a lush razzamatazz sound that makes the fiscally-sensible choice almost forgivable. A couple of singers actually weren’t in perfect sync with the tempo of the tracks and it wasn’t intentionally alternative phrasing. And on some the tracks, you might think you hear a singer’s voice faintly like an echo.

But the theater’s financial commitment to the production is visible in the program in a special way: The Wick may be the only theater in the region that has understudies.

In the end, literally and figuratively, White Christmas is a “forget your troubles, c’mon get happy” production whose finale should melt not just snow but ice-cold hearts.

A private message to the drunken redhead sitting two seats away from us in the second row of the loge. Do us all a favor: If you can’t stay sober, at least shut up. And to the guy sitting next to my wife, trying to hide that he couldn’t stop smoking the electronic cigar with the annoying electric light near the holder: It smells.