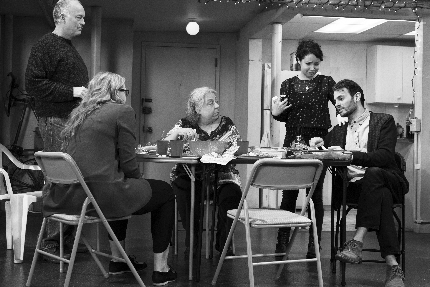 The Broadway cast of The Humans

So much news: GableStage and Zoetic Stage announcing their new season with titles like The Humans and Fun Home, MNM announces partnership with the Kravis, Conundrum Stages returns to tour. Even more items coming soon.

GABLESTAGE ANNOUNCES LAST SHOW OF CURRENT SEASON PLUS NEXT SEASON

There are some shows when viewed in New York that any veteran South Florida theatergoer know will likely end up on GableStage’s next season.

In a time when plays have a shaky future on Broadway, Karam’s Pulitzer Prize finalist played in various Manhattan theaters for almost a year.

GableStage described it as “an uproarious, hopeful, and heartbreaking play that takes place over the course of a family dinner on Thanksgiving. Our modern age of anxiety is keenly observed with humor and compassion.”

It marks the third work of Karam’s that GableStage has mounted including Sons of the Prophet in 2013 and Speech and Debate in 2010.

The esteemed Coral Gables company based at the Biltmore Hotel also has announced its 20th anniversary season as well, many titles having scored with critics and audiences in New York City in the past two years.

Nov. 25-Dec. 23
Becoming Dr. Ruth, by Mark St. Germain
Everyone knows Dr. Ruth Westheimer as America’s most famous sex therapist. Few, however, know the incredible journey that preceded it. From fleeing the Nazis in the Kindertransport and joining the Haganah in Jerusalem as a scout and sniper, to her struggles to succeed as a single mother coming to America,
Becoming Dr. Ruth is filled with the humor, honesty and life-affirming spirit of
Karola Ruth Siegel, the girl who became “Dr. Ruth.” The play written by St. Germain (Freud’s Last Session) was performed at the Parker Playhouse in 2014.

Feb. 3-March 4
If I Forget, by Steven Levenson
A powerful tale of a Jewish-American family and a culture at odds with itself. Three siblings reunite to celebrate their father’s 75th birthday. As destructive secrets and long-held resentments bubble to the surface, they negotiate with biting humor and razor-sharp insight-how much of the past they’re willing to sacrifice for a chance at a new beginning.

April 7-May 6
Gloria, by Branden Jacobs-Jenkins
A funny, trenchant and powerful new play that follows an ambitious group of editorial assistants at a Manhattan magazine, each of whom hopes for a life of letters and a book deal before they turn thirty. When an ordinary workday becomes anything but, the stakes for who will get to tell their own story become higher than ever. The Pulitzer finalist was written by Jacobs-Jenkins, a rising African-American playwright who penned the high-profile New York hit The Octoroon.

June 9-July 8
I’m Gonna Pray For You So Hard, by Halley Feiffer
Ella is a precocious and fiercely competitive actress whose sole aim in life is making her famous playwright father, David, proud. Over the course of a boozy evening, Ella and David deliberate over whether to read the reviews of her
Off-Broadway debut… and things unravel from there. Halley Feiffer’s dark, probing and funny new play pulls the audience into the middle of a deeply complicated relationship and sheds new light on the eternal struggles of parents and children to find common ground.

Aug. 11-Sept. 9
White Guy On The Bus, by Bruce Graham
A fearless new play that unravels a complex web of moral ambiguity, revenge, and racial bias. A wealthy white businessman and a struggling black single mom ride the same bus week after week. As they get to know each other, their relationship sparks a candid and surprising look at racial and economic divides.

As usual, Adler is in negotiations for the last title in the season, slated for Oct. 13-Nov. 1 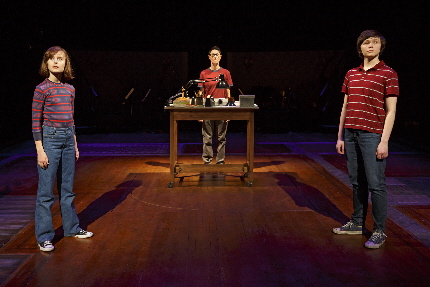 Zoetic Stage, the resident theater company at the Arsht Center in Miami, scored a major “get” with the rights to Fun Home, the acclaimed Tony Award-winning musical about a young lesbian discovering her sexual identity in a troubled home headed by a deeply closeted father. It will finally play South Florida next spring, topping an impressive roster of promising titles.

Nov. 2 – 19
Topdog/Underdog, by Suzan-Lori Parks
The Pulitzer Prize-winning play is a darkly comic tale of brotherhood and family identity. The play tells the story of two African-American brothers named Lincoln and Booth coping with women, work, poverty, gambling, racism and their troubled upbringings. Haunted by the past, the brothers are forced to confront the shattering reality of their future. The play has not been professionally produced locally since Mosaic Theate in 2004.

Jan. 18 – Feb. 4, 2018
Wrongful Death and Other Circus Acts, by Christopher Demos-Brown
This world premiere by one of Zoetic’s founders is a dark comedy, which has had staged readings in past years, including one at Maltz Jupiter Theatre. Following a fatal plane crash, Laura Mendes, a struggling personal injury lawyer, scampers to sign up the case of a lifetime. The play takes a wry, satirical look at the crude ways in which Capitalism places value on human life. Demos-Brown is the author of Stripped, Captiva, American Son and Fear Up Harsh.

March 8 – 25
Dancing Lessons, by Mark St. Germain
Dancing Lessons is the story of Ever, a young man with high-functioning autism, who enlists the help of a Broadway dancer to in order to help him survive an awards dinner. The dancer, Senga, is recovering from an injury that may end her dancing career. As their relationship unfolds, they are caught off-guard by the discoveries – both hilarious and heartwarming – that they make about each other and themselves. St. Germain is the author of several plays produced locally including Freud’s Last Session.

April 12 – May 13
Fun Home
Recent winner of the Tony Award for Best Musical, Best Score, and Best Book of a Musical, Fun Home is about a graphic novelist who dives deep into her past to tell the story of her father, a volatile, brilliant, one-of-a-kind man whose temperament and secrets defined her family and her life. Through her work, she relives her unique upbringing in the family’s funeral home, her burgeoning sexuality, and the looming, unanswerable questions about her father. Fun Home is a refreshingly honest, wholly original musical about seeing your parents through grown-up eyes. Book and lyrics by Lisa Kron, music by Jeanie Tesori (Caroline, Or Change), based on the graphic novel by Alison Bechdel.

The Zoetic lineup is part of the Arsht Center’s Theater Up Close series of live theater performed in its black box venue.

In addition to the Zoetic titles, the Arsht will host the national tour of Small Mouth Sounds Feb.16 – March 4, Bess Wohl’s unique and compassionate 2015 play that asks how we address life’s biggest questions when words fail us. In the quiet of the woods, six strangers embark on a silent retreat. As they struggle to confront their internal demons, their vows of silence collide with their achingly human need to connect. Written by Drama Desk Award winner Bess Wohl (Pretty Filthy) and directed by Obie Award winner Rachel Chavkin (Natasha, Pierre & The Great Comet of 1812).

The Arsht also will host a new version of Summer Shorts, City Theatre’s venerable anthology of short plays, appropriately named Winter Shorts since it will be performed Dec. 7-23.

MNM Productions, the relatively new company whose rapid rise in mounting musicals was recognized this spring with a Carbonell Award for best ensemble, will produce the last show of its coming season, Little Shop of Horrors, as a co-production with the Kravis Center on Dec. 1-17.

While the troupe has been renting the Kravis’ black box venue, the Rinker Playhouse, this production will benefit from the Kravis’ financial investment and infrastructure.

Begun about three years ago, MNM is a for-profit company created by producers Marcie Gorman-Althof and Michael Lifshitz which has mounted four musicals – A Chorus Line, Side by Side by Sondheim, Hair and And The World Goes ‘Round, a revue of Kander & Ebb show tunes.

The team-up reflects a trend of partnerships between theater troupes and major presenting houses in the region: the Arsht Center in Miami with Zoetic Stage, Slow Burn Theatre Company with the Broward Center, and the Kravis with Florida Stage which closed after a few seasons there.

Little Shop, a rock and roll/doo-wop musical about a shy florist and his ravenous flesh-eating plant is loosely based on the cult movie. It features music by Alan Menken and a script by Howard Ashman. Several people who have worked on MNM’s previous productions are involved, including Bruce Linser as director, Paul Reekie as musical director, choreography by Kimberly Dawn Smith, and a cast that includes Mike Westrich as Seymour, Mallory Newbrough as Audrey and Peter Librach as Mushnick.

CONUNDRUM STAGES YEAR 9 “WE ARE SO FLA”TOUR

Conundrum Stages, the peripatetic company that has presented everything from staged readings of plays to improv comedy with strictly local talent, will kick off its ninth season June 2-29 by touring several venues from Miami Beach to West Palm Beach.

A changing roster of Conundrum veterans will perform in varying types of shows designed to show off the talents to mostly fledgling performers, most of whom are trying to make a reputation. Conundrum President Kevin Johnson has said that his programs underscore the wide range of talented residents, proving that Floridians don’t need to look to out-of-state names for their entertainment.

All presentations have free admission.