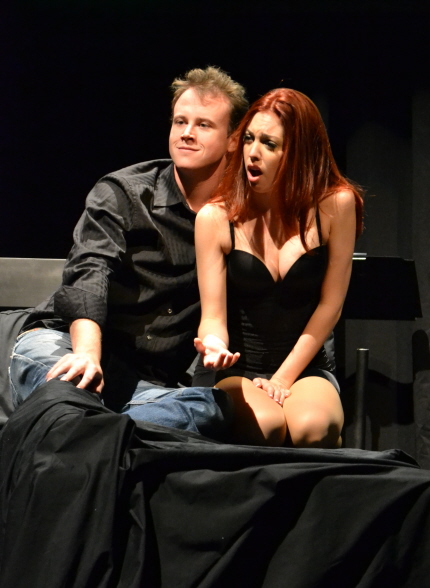 Palm Beach Dramaworks cancelled its Wednesday performance of the staged concert of Company to adjust to changes required when the New York licensing agent discovered that characters had been omitted, lines had been cut and the score altered, the theater and licensing company confirmed.

“Palm Beach Dramaworks regrets the unfortunate misunderstanding that has occurred,” wrote spokesman Peter Cromarty. “When we were contacted by our licensing agency, we acted promptly and professionally to address their concerns.”

Additional actors were hired this week to augment the existing cast of 10. Excised portions of the show were restored in rehearsals Wednesday afternoon. The show, which has been well received with audiences and critics, resumes Thursday and has added a 7 p.m. Sunday performance for the Wednesday patrons.

Music Theatre International insisted on the restorations when they were informed that four roles had been cut, those characters’ lines given to other remaining characters, and parts of the script and score had been cut—all without permission.

Matt Boethin, associate director of professional licensing for MTI, said Wednesday, “Once we reached out to them, they acted completely appropriately and were so cooperative. They said they did not know they couldn’t do that.”

The licensing regulations do not allow for changes in the script, score, intent, change of sex of characters or elimination of characters without specific permission, Boethin said.

Company is the third in Dramaworks’ Musical TheatreMasters series, which has been acclaimed for its expertly staged productions. Each production was directed by Clive Cholerton who had mounted similar shows when he was artistic director at Caldwell Theatre Company. Company and Man of La Mancha were notable for the amount of stage movement and choreography enhancing what is ostensibly a concert in which actors can refer to scripts on music stands if need be.

Stephen Sondheim’s landmark musical Company examines the emotional growth of Robert, a 35-year-old bachelor in New York City whose most meaningful relationships are as the best friend and quite-welcome third-wheel to five dysfunctionally married couples. On his birthday, we see earlier scenes of him watching and analyzing those marriages, contrasted with scenes depicting his inability to commit to serious relationships with three girlfriends.

In the Dramaworks’ version, the five couples were pared down to three. Scenes for the AWOL couples were given to some of the remaining couples. One scene in the original 1970 script was missing in performance. In the song “Someone Is Waiting,” Bobby wistfully sings about the merits of all five of the wives; in the Dramaworks’ production, the lyrics seemed to have been rewritten to leave out the names of the missing characters.

Company has been tweaked by its creators over the years, notably adding and subtracting musical numbers. But textual changes have been minor compared to those for Sondheim’s Merrily We Roll Along.

The situation echoes an even more controversial incident when Coconut Grove Playhouse produced Side by Side by Sondheim in March 2001. The revue of Sondheim songs, compiled in 1976, obviously did not include anything from the still-to-be-written Sweeney Todd, Sunday in the Park With George or Into The Woods. Director Jack Allison inserted songs like “Sooner or Later” from the movie “Dick Tracy,” plus an overture of bits of 22 songs and inserted biographical narration from a recent biography of Sondheim – none of it authorized. He had done some of that in a 1987 staging at the Grove.

Reportedly, people in the 2001 troupe objected, even mentioning it to sometime Miami Beach resident and Sondheim colleague Harold Prince. But they were overruled.

After the show opened, MTI was alerted to the changes by local reviews of the show. MTI shut down the show. The Grove ended up taking advantage of the fact that Barbara Cook was passing through town and asked her to do a concert for the advance ticket holders.

Sondheim is famously protective of his work. One production wanted to make Bobby in Company gay and Sondheim refused to allow it.