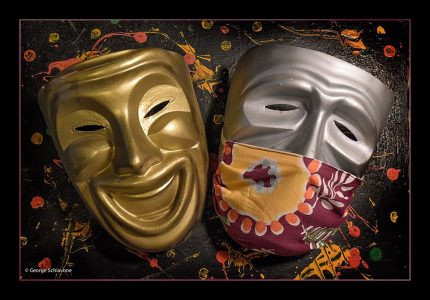 In the wake of several cast or crew members testing positive for Covid, Miami New Drama has cancelled its performances for A Wonderful World until resuming Dec. 29, the company confirmed Wednesday afternoon after shutting that night’s production.

The company, which tests everyone remotely connected with the production every two or three days, had cancelled two performances earlier in the run that began Dec. 11. The company balked at listing how many people were affected.

The six cancellations total are the first publicly reported in the South Florida theater world. But multiple theaters have been cancelling performances for days now in Chicago, Atlanta, Los Angeles, Washington, D.C., and especially New York City where a third of the Broadway shows have gone dark until after Christmas or later, and four shows have shuttered for good.

But the precise combination of who tested positive more recently made it difficult to reassign parts to make a performance possible, Richberg said. Additionally, with members traveling in and out of town for the holidays, cancelling performances through the 28th just made sense, he said.

“We have a great show; we just aren’t able to perform it,” Richberg said.

The company has just sent out email notifications of the cancellations to patrons. Its staff is notified if the email has not been opened. Those patrons will receive telephone calls and texts. Among the options offered to them are rebooking the ticket for later the run and possibly a streaming version. The company had been discussing even before the opening whether they will extend the run and that decision has not been made.

“But we don’t want anyone showing up thinking we have a performance,” Richberg said.

Also, the entire run of Not Ready For Prime Time, a play slated to open New Years Eve at the Westchester Cultural Arts Center has been postponed to undetermined dates in March because four or five people connected to the show including one of the writers tested positive, spokespeople said.

The Brightline Polar Express train ride leaving from Miami, which uses some local talent in a kind of performance, announced it canceled all departures on Dec. 23 and 24 “due to additional positive COVID-19 tests.”

Slow Burn Theatre Company at the Broward Center in Fort Lauderdale cancelled its preview performance Friday of Kinky Boots, but that was due to a combination of technical problems that prompted a delay to ensure safety, not Covid, said director Patrick Fitzwater.

Several shows had their final performance last weekend as scheduled with no public reports of illnesses during their run including Palm Beach Dramaworks, GableStage, Boca Stage, Pigs Do Fly and City Theatre.

Due to the holiday week, very few companies had performances planned over the next week and a half, primarily Miami New Drama and GableStage’s Joe Papp at the Ballroom.

But 22 productions will open in January from professional and community theaters.

Company leaders in the region privately have been dreading the onset of the Omicron Variant since last month, but several are cautiously optimistic for several reasons.

First, every company – notably Miami New Drama — has been observing rules set by the Actors Equity union and recommendations from other groups to reduce the chance that the virus would spread among the troupe. Actors, crew members, even office workers are tested two to three times a week.

But the testing has produced an attitude that everything could change at any point. When Slow Burn does a test, it only means that the show will go on another two performances, Fitzwater said. “Every second show we treat like it’s the last one,” Fitzwater said. “We’re just taking it day by day.”

Actors are wearing masks backstage, whipping them off just before they go onstage, sticking them into their costumes and then replacing them moments after they exit. Artists have been required to have been vaccinated when rehearsals started and many have had booster shots, Fitzwater said.

Most company leaders say the audience is even better protected. Most people are willingly wearing masks in the auditorium and lobbies. If someone doesn’t have one, the company provides one. If someone doesn’t wear it, his neighbors often urge them to do so.

Companies are wiping down seats and have spent large sums to overhaul air handlers with stricter filters and an increased ability to move air in and out quickly. Actors generally do not meet and greet audience members after a show.

Generally, theater leaders also believe that their patrons are of a mindset to be more receptive to having gotten vaccines or having been tested.

Some theater leaders fear that a Covid resurgence will spook patrons having second thoughts about attending.  So far this season, most but not all shows have been selling about 70 percent of their houses.

A third company leader in a smaller venue said privately that he is sick and tired of the fear. His loyal patrons don’t seem to be nervous and feel assured that the theater is taking every step possible.

In a separate inerview, William Hayes, producing artistic director of the larger Palm Beach Dramaworks, reported, “During the recent run of The People Downstairs, we did have some customers requesting refunds closing weekend, but, we had more patrons buying tickets, and a large majority of our subscribers (are) eager to return to live theater.”

“PBD is not going to make any immediate changes based on the current news.  We will carefully evaluate as news develops and take careful well thought out steps.  But, it is currently our plan to stay on schedule.”

He wrote, “But I personally believe that a majority of patrons want to return to the theater and intend to continue to do so, even with the growing threat of the new variant. There seems to be a new attitude, even with the senior patrons. They are not willing to spend their senior life sitting at home, living in fear. They would rather live a quality life, while being as careful as possible as they do so (wearing masks, washing hands, keeping distance when possible), than sit at home.

With all the precautions, Fitzwater said, for audience members “being in the theater is one of the safest places to be.”