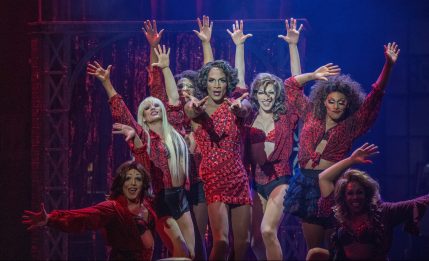 For the moment, let’s put aside the messages of acceptance, being comfortable in your own skin, family bonds and making your own path—all of which Slow Burn Theatre Company deftly explores in its high-energy version of the musical Kinky Boots. Instead, let’s start with the sheer entertainment gifted by Slow Burn’s grand production of Kinky Boots, being staged through Jan. 2, 2022, at the Amaturo Theater. Broward Center For The Performing Arts in Fort Lauderdale.

Slow Burn’s Kinky Boots pulls it all together, from the high-step dancing—and we do mean high with those boots—to the enthusiastic singing to the solid acting, all under the helm of director/choreographer Patrick Fitzwater.

All this rests heavily and happily on the very agile—and very long—legs of charismatic Elijah Word, bringing a triple threat star turn to the role of drag queen Lola, whose quite kinky boots become the fulcrum for saving a failing factory.

Word is clearly having the time of his life in this role and his infectious fun resonates with the audience. Word has been showing his talents as part of ensembles in the area, culminating with much deserved Carbonell Award for Best Supporting Actor in the musical, Dreamgirls, at the Broward Stage Door Theater in 2018 for his performance as James Thunder Early.

As the fearless Lola, Word gives a searing performance that is pure joy, handling with bravado his outlandish numbers in drag, bringing sex appeal and a bit of danger in numbers such as “Sex Is in the Heel” and “The Land of Lola.” Then showing his singing chops include being a belter in the heartfelt “Hold Me in Your Heart.”

Kinky Boots, with book by Harvey Fierstein and music and lyrics by Cyndi Lauper, earned six Tony Awards in 2012. Based on a true story, Kinky Boots’ plot begins with Charlie Price (a winsome Dominique Scott) who doesn’t want to take over Price & Sons, his father’s third-generation shoe factory in England’s Midlands. He leaves for London with his materialistic girlfriend Nicola (Tory Vagasy). This being a musical, we immediately know that Nicola is wrong for Charlie, no matter how strong a singer Vagasy is.

Then Charlie’s father dies, leaving him the factory and the future of the employees, many of whom Charlie has known since he was a child. But the factory is failing, a situation Charlie’s father kept from him. Price & Sons makes high-quality shoes for men, the kind of shoes that never wear out so there is little reason for customers to buy new pairs each year. Plus, these are boring shoes. Stores begin to cancel long-standing orders.

By chance, Charlie meets Lola, who has a broken heel. The idea to reboot the factory to make kinky boots with sturdy stilettos for drag performers proves a salvation for the business, after, of course a bit of drama and lot of songs. Charlie finds an instant ally in long-time factory worker Lauren (a terrifically appealing Shannon Mullen). This being a musical, the audience can be guaranteed Charlie and Lauren are meant for each other, despite her rousing song “The History of Wrong Guys.”

The leads have real chemistry—we believe the growing friendship between Charlie and Lola and the romantic relationship between Lauren and Charlie.

Essentially, Kinky Boots is about two men, both of whom have father issues, looking for a purpose in their lives. “Find your niche” refers, on the surface, to making a successful niche market with the kinky boots, but really is about Charlie and Lola finding their own niche. Lola has found his, Charlie is still looking.

The uniformly terrific ensemble cast works well with standouts being Kat Gold at Pat; Paul Wong as George; Shelley Keelor as Trish; Jerel Brown as Simon Sr., doubling as dance captain and assistant choreographer; and JohnBarry Green as the rough-around-the-edges factory worker Don gives an amusing start to Kinky Boots. In full costume, Green makes a blunt “suggestion” that cell phones need to be turned off. Green means business, and, if I were you, I would adhere to his.

Kudos also to Lola’s Angels, the backup dancers/singers whose kicks and turns in those sky-scraper heels made my ankles weak: Christopher Michael Milligan, Clint Maddox Thompson, Cory Shorter, Pablo Pernia, Ray Gleaves and Xavier Reyes. Each of whom were enhanced by makeup designer Nicole Halliwell.

Adding the cuteness level were Antuan McGriff as young Lola and Zach Brill as young Charlie (Ben Romay takes over the role Dec. 25 to Jan. 2)

Costume Design, both tasteful, and drag queen ready, are credited to Gregg Barnes with Rick Pena lending his skills as costume supervisor.

Kinky Boots is made for walking, and dancing and kicking.

Kinky Boots presented by Slow Burn Theatre Company through Jan. 2, 2022, at the Amaturo Theater, Broward Center For The Performing Arts, 201 SW 5th Ave., Fort Lauderdale. Performances are Tuesday through Saturday at 7:30 p.m., Saturday and Sunday at 1 p.m., Sunday at 6:30 p.m. Running time two hours, 24 minutes with one 20-minute intermission.  Tickets are $49.00 – $65.00. Call (954) 462-0222 for tickets, at www.browardcenter.org or #Ticketmaster.com; in person at Ticketmaster outlets or the Broward Center’s Auto Nation Box Office. Info at www.slowburntheatre.org

COVID PROTOCOL: Masks required in lobby and auditorium. Ticket, even those bought at the box office, are supplied through email and texts. Outside the theater, staff checks for both ID and proof of vaccination or recent COVID test. Then a green wrist bracelet is attached before entry and security wands for weapons. Printed playbills are available but also can be downloaded. Drinks and snacks available