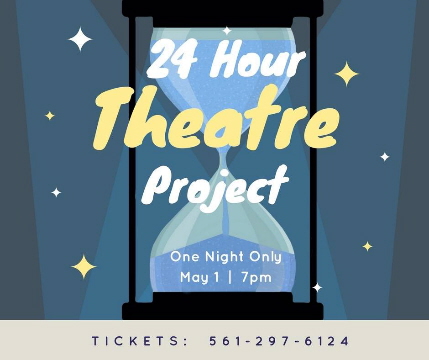 The future of the 24-Hour Theatre Project – a popular fund-raiser that cemented the theater community’s solidarity – seemed endangered when its founders, Katherine and Antonio Amadeo, announced they would be leaving the state in 2017.

Enter the Theatre Lab, which will present the 24-Hour Theatre Project on May 1 with the Amadeos’ blessing. Some of the proceeds will go to support a new play festival at the Boca Raton company on May 10-14; the rest will go to a charity of the Amadeos’ choice.

Naked Stage co-founders Katherine and Antonio Amadeo created the local version of a national event: Local playwrights, actors, directors and technicians unite for a 24-hour period to write, rehearse and perform up to nine short plays that are then performed for paying audience.

The project raised some money, especially since most participants and the host venue donated their services. But the entertainment/artistic results aside, the joyous, raucous and somewhat crazed effort was emblematic of and strengthened the ties among local theater professionals.

“When we began this thing 10 years ago, we didn’t fully understand what it would become,” said Katherine Amadeo in a news release. “We thought we were just doing a fundraiser. It wasn’t until that first curtain call, when we saw all these wonderful members of our community on stage together for a final bow that it really hit us. This event was more than a fundraiser. It was a chance for all the incredible artists in South Florida, who are always so busy working on their own amazing projects, to unify as a community around a single, and slightly crazy, creative endeavor. We didn’t like the idea of that leaving town with us.”

The 24-Hour Theatre Project process will begin on the Sunday evening of April 30 and will culminate with the performances at 7 p.m. Monday, May 1, in FAU’s Parliament Hall, 777 Glades Road, Boca Raton campus. Individual tickets are $24.  For tickets and more information, call 561-297-6124 or stop by the box office in FAU’s Student Union.

Matt Stabile, associate artistic director of Theatre Lab, wrote, “I’d been involved in the past two 24-Hour events, first as an actor and then as a writer, and I had an amazing experience.  It’s insane, exhausting, and one of the most artistically rewarding experiences I’ve ever been a part of.”

The hand-off has resonance for the Amadeos, who heartedly gave their blessing to Theatre Lab.

“We had both worked with Theatre Lab during their first season of readings and were really interested in the work they were doing and their commitment to the community,” wrote Antonio Amadeo.  “And what better place to host an event about creating new work overnight than a company dedicated to new work in American theater?”

Nine days later, Theatre Lab will host a five-day festival of staged readings of five full-length plays and an evening of shorter works all in development, including a work by acclaimed Miami playwright Christopher Demos-Brown. Each will be followed by a post-show discussion, in which audience members can interact with the playwrights themselves and learn more about their process, inspiration and plans for future development.

—An Evening of Short Plays, Wednesday, May 10, 7:30 p.m. Ticket $10
These plays were selected from submissions open to participants in the master classes and workshop with Stabile, associate artistic director, for one month prior to the festival. The playwrights range from the novice to professional.

—The November Laws, by Christopher Demos-Brown, Thursday, May 11, 7:30 p.m. Ticket $20
A parable about how the most venerated constitutional democracy in the history of human events, unwittingly entrusted to men and women of limited character and ability, collapses not with a bang, but with a series of tragic whimpers.

—381 Bleecker, by Gia Marotta, Friday, May 12, 7:30 p.m. Ticket $20
It’s 2015, and Meg, an avant-garde choreographer in her early 60s, is losing the West Village apartment where she’s spent her entire adult life. When her sister, Ellen, shows up with her son, David, to help Meg pack, the two women must reckon with a complicated snarl of old wounds connected to their brother’s battle with AIDS in the 1980s.

—The Prey, by Gina Montet, Saturday, May 13, 3 p.m. Ticket $20
A Miami playwright brings a tale of beauty, love and murder in the heart of the Everglades.  Set deep within the wild Florida frontier of 1912 and inspired by actual events, The Prey is a chilling interpretation of one of Florida’s most notorious killings.

—Hurricane Colleen, by Tammy Ryan, Saturday, May 13, 7:30 p.m. $20
Six months after their sister, Colleen, has died of cancer, Maggie and Rosemary rent a beach house in Melbourne to have a memorial and scatter Colleen’s ashes.   The family reunion is interrupted when a tropical depression forming in the Caribbean suddenly turns into a hurricane and is heading their way.  Though they fall within the “cone of uncertainty,” the sisters and their partners decide not to evacuate. As the strong winds and rain bands begin, strange encounters with wildlife signal something more is going on, both between the sisters and with Mother Nature, as they struggle to ride out the storms outside and inside.

— Most Wanted, by Peter Sagal, Sunday, May 14, 3 p.m., Ticket $30
Frank and Doris are retired, comfortable and desperate. One day, they snatch their darling baby granddaughter and make a run for Florida, land of eternal sunshine and eternal rest, where they meet a variety of characters living on the fuzzy border between life and death—all of whom look just like the people they left behind. Cornered by an affable detective, they make one last run to President Truman’s Little White House in Key West, at the very end of the road. There, their daughter, Isabel, an avenging angel in expensive clothes, corners them and confronts them with every mistake they’ve ever made. This comedy about parents, children and the fate that awaits us all won a MacArthur Fellowship from the O’Neill Theater Center.

Patrons are encouraged to come early to enjoy beer, wine, drinks and snacks and explore the gallery exhibition space that houses the lobby for Theatre Lab. For a full schedule and more information about the Theatre Lab at FAU, call 561-297-4784, email theatrelab@fau.edu or visit www.fau.edu/theatrelab.

All shows will be presented in Theatre Lab, in Parliament Hall, 777 Glades Road, Boca Raton campus. Tickets are priced separately, but there is also an all-access Festival Pass available for $95. Discounted half-price tickets are available for students/faculty/staff/industry members for cash only at the door one-hour prior to each event. For tickets, call 561-297-6124 or visit www.fauevents.com. Wyndham Hotel in Boca Raton is offering Play Festival Patrons the preferred rate of $89. To request the FAU rate, call 888-404-6880 or visit www.wyndhamboca.com. Wyndham Boca also offers free shuttle service to and from campus.