Son At Island City Stage Deserves To Be Embraced 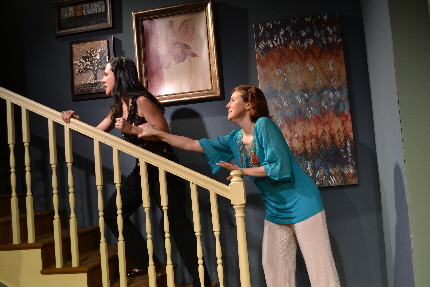 Just about two years after Island City Stage premiered Michael McKeever’s Daniel’s Husband and it is currently playing off Broadway, Island City Stage takes on another world premiere play that has the makings of what could be a successful regional theater offering.

In the days since Island City Stage decided to world premiere Son, Leeds, Rogow and Beller have been working on rewrites of the two-act, 29-scene play.

Son opens with a teenager parked on a bench. Scene 1: “Not Half Bad”. He’s reading something on his cell phone and reciting the words. Then blackout.

Scene 2: “Did You Feel It?” It’s the night before the wedding of a couple, Day Branford and Jean Garcia (Elizabeth Price and Arlette Del Toro), at their home in Annapolis, Maryland, where party cleanup is underway. Other guests have gone home and now they are left with close friends, another couple, Margaret and Lisa (Sabrina Lynn Gore and Erynn Dalton).

Day and Jean have been together 12 years, but are only now getting married. We settle in. The opening so far signals that we’re in for a comedy. Jokes are volleyed about – a male stripper found on Craig’s List was the entertainment at the lesbian bachelorette party. Gay female locker room talk ensues – how lesbians really feel about the male appendage, and have they, quite literally, felt it at all.

We’re introduced to the women’s 15-year-son, Perry (Gabe Vasquez). He’s Jean’s biological son, but Day has raised him like her own. In fact, the boy has her last name, too, along with his biological mother’s. His full name is Perry Garcia-Branford. The mothers have the usual exchanges with the teenager – where was he, why was he out so late, why is he craving chocolate cake? “Have you been smoking?” Jean asks. “Why the munchies?” Perry counters: “I’m a teenage boy. I burn 4,000 calories a second.”

By Scene 3: “This Is Bullshit,” the tables have turned. There’s no “wait for it.” It’s pretty swift. It’s the morning of the wedding, and, as the women are making final preparations, Officer Thompkins (Juan Alberto Perez) shows up at the door. He wants to talk to Perry. Soon after, Perry is arrested. Of course, the wedding is off.
So as not to give away spoilers, accusations have been made against Perry. They’ll test the couple. The play turns dramatic, and it will touch upon multiple issues, more than what can be effectively dug into in the course of a two-hour play – infidelity, teenage suicide, teenage pregnancy, rape, mental health, gay parenting, and then some. Issues are mentioned and glossed over, others are dug into.

While still in need of some script doctoring because of the aforementioned catch-all of hot-button issues, Son pulls you in. Son is real, interesting, entertaining and thought-provoking. Beller has created sympathetic characters and layers them with real emotion, which distracts from some of the drama’s formulaic qualities.

Price as Day, whose character repeatedly assures everyone that “It’s gonna be alright,” is able to skillfully suggest that maybe it won’t be alright in an understated portrayal that speaks volumes. When she confides to the audience in a monologue, which plays as if it were an inner dialogue, about some of her own indiscretions, it’s touching, and heartbreaking.

As Jean, Del Toro has the most difficult monologue in the play, recounting a horrific scene from the character’s past as if it was happening in the now. She only needs to work on her projection – even in the small theater some of the words were lost.

Vasquez as Perry rises to the occasion. The real-life high-school senior looks the part to a T and brings a defiance, yet softness to the teenager. One of the highlights of the evening is the actor’s sensitive monologue – Scene 20:“You’re a Good Boy” – about a “puny little runt” of a dog with “teeth and fangs” bared, but who just wants to be told he’s a good boy. Vasquez’s delivery lets you know that maybe he and the dog wish for the same thing. It’s good acting, good directing, good writing.

Gore and Dalton are the much-needed comic relief during the too limited time they are on stage as the on again, off again couple whose answer to any lesbian crisis is making herbal tea. “We’re dykes,” says Margaret. “We have every brand of herbal tea known to womankind. Evening Rainbow, Rainbow Dreams, Peaceful Evening, Celestial Evening, Peaceful Dreamtime Rainbow.”

Rogow announced to the audience prior to Saturday night’s performance that it is the sixth world premiere play at Island City Stage in less than five seasons. It’s no small claim. What this does for the Wilton Manors theater is make it relevant beyond Fort Lauderdale, especially in its commitment to presenting LGBT-centric works. Theater companies that put their stamp on new works are giving South Florida a name (Daniel’s Husband is the perfect example) and giving playwrights a chance to have their works not only produced, but, as such is the case for Son, aided in their development.

There is work to be done to make this new play ready for the rafters beyond this world premiere. Yet there are reasons to embrace Son for its daring and, although audiences without a critical eye won’t notice, the nurturing expertise that Leeds and Rogow have so seamlessly imparted.

Son runs through May 7 with performances on Thursdays, Fridays and Saturdays at 8 p.m. and Sundays at 5 p.m. at Island City Stage, 2304 N. Dixie Highway, Wilton Manors. Tickets are $35 at islandcitystage.org or the box office at 954-519-2533. Running time: 2 hours and 15 minutes with a 15-minute intermission.