A Memorable “The Fantasticks” At Broward Stage Door

Posted on September 9, 2015 by Bill Hirschman 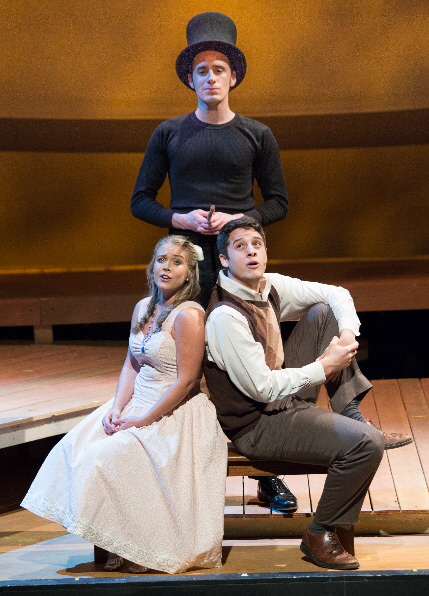 The crucial test for whether a production of The Fantasticks truly succeeds, as Broward Stage Door’s does, is the last few minutes.

The reconciliation scene has to deliver a sense of guileless fantasies having been scraped away by callous experience, leaving behind a lasting love born not of romance novels but of chastened, tested affection.

And it has to feel as real and true as the preceding two hours have been a stylized gaily theatrical celebration of youthful foibles evolving into mature knowledge.

Like the entire show, the tone is surprisingly hard to nail because it seems so simple and, in fact, is unusually difficult. It has been bungled by thousands of high schools, community theaters and professional productions that have thought, “How hard can this be?” Because the Tom Jones-Harvey Schmidt classic has such inherently strong material, most don’t even know that they’ve fallen short of what makes this work so magical and moving.

So deliver up praise to Dan Kelley’s production for the tender final scene in which our lovers clearly discover abiding love beyond the transitory externals of romance.

Watch the faces of Alexander Zenoz and Molly Anne Ross as they begin singing about their shattered dreams, only to convincingly realize that “real love” is each other in “They Were You.”

But the veteran Kelley has never directed this warhorse before, a surprise since he has imbued the entire production with the precise whimsical tone that teases human folly but retains an aching compassionate affection for it as well.

Perhaps other productions have seemed superior in particular areas, but this one lands almost as solidly across the board as you could ask. Almost. If its admirable lead actor as El Gallo isn’t as strong as the rest of the cast, it’s noticeable because everyone else is pretty close to nailing their assignments.

Ross, who was one of the Andrews Sisters in Stage Door’s Sisters of Swing, is someone to watch. The Palm Beach Atlantic University grad exudes a fresh-face loveliness matched by an even lovelier creamy soprano that is more than a match for Schmidt’s faux operatic runs. More importantly, she is an actress whose unafraid embrace of Luisa’s wide-eyed ecstatic reaction to everything in the first act is counter-balanced in the second act by the slow bloom-off-the-rose realization that her fantasies are, indeed, fantasy.

Zenoz, so good in Slow Burn Theatre Company’s Edges: A Song Cycle, is just as good as a vocal thespian, although you wish Kelley had pushed him even harder to dig a little deeper into Matt’s emotions.

Among the distinct pleasures is watching troupers Larry Kent Bramble and Michael Small do their vaudeville double-act as the lovers’ fathers. Both are Stage Door veterans. They seemed up for the same type of Jewish senior citizen parts so often that some folks wondered if they were the same person. (They actually don’t look anything like each other).

Alan Gerstel, the former television news anchor, has been resurrecting his acting career in recent years with varied results. But his impersonation here of the vainglorious down-on-his-luck aging travelling thespian Henry is just note perfect from the plummy voice to the mixture of pride and neediness. Sebastian Lombardo makes for a fine sidekick, Mortimer, the specialist in death scenes.

The tall and lithe Pierre Tannous becomes an essential piece of the stagecraft as the Mute, smoothly providing necessary props like magic, changing the mood and the lighting with a graceful wave of his arm. Throughout, his expressive face depicts a soul completely involved in every turn of the principals’ emotions.

As El Gallo, Pedro Kaawaloa Jr. is a handsome, likable fellow with a sultry baritone that is perhaps a few notes higher than some of his predecessors. He’s always working to deliver the character. The problem here is casting. First, he has a sibilant S problem that undercuts the Harlequin Romance image of a dashing rake. Second, he is reciting the delicate insightful monologues like memorized lines with little of verbal music that Jones imbued in the near-poetry. The young Kaawaloa also needs some life experience before he can deliver those lines as if they emanate from rue-filled lessons.

Kelley doesn’t reinvent the fragile piece; it doesn’t need it and would probably disintegrate if someone tried. But having never staged it before, Kelley invests it with an indescribable freshness. There are scores of little bits of business you haven’t seen before such as having the Mute welcome each actor with a character’s key prop.

Musical director David Nagy does his usual solid job molding the singers and his face playing the piano on stage along with harpist Kay Kemper is usually suffused with a grin betraying his love of the score.

The rough-hewn multi-level wood set with its raked platforms and the ever-changing atmospheric lighting are some of the best work we’ve seen from Ardean Landhuis – although sometimes someone is in shadows when they shouldn’t be. Also, Colleen O’Connell has done a nice job with the low-budget costuming, especially the raggedy raiments for the Henry.

The one jarring moment is the number “It Depends On What You Pay.” Originally, the song referred regularly to the proposed abduction as a rape, used in a generic non-sexual sense as in the classical tale “The Rape of the Sabine Women.” Acceding to a defensibly more sensitive 20th Century society and the word’s more modern meaning, the authors provided an alternative set of lyrics in recent years to be used at the producer’s discretion, which is what has been chosen here.

But Jones had to turn himself inside out and backward to avoid the word and find synonyms. The rewrite isn’t overly clumsy but it certainly is not as elegant as the original heard on the original cast album. Now the one syllable is replaced with abduction, masquerade, raid, snatch, grope and siege.

Otherwise, if it’s been a little while since you saw the show live and yearn to try to remember, this will do very nicely.