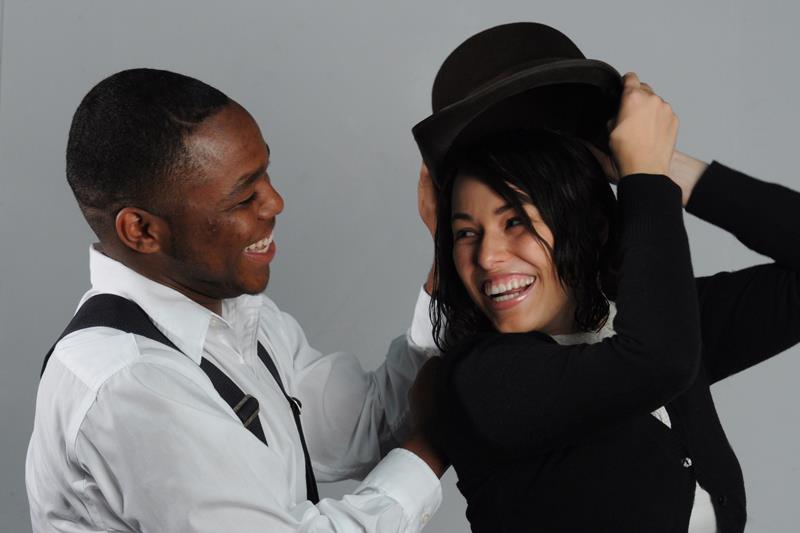 Theater is about imagination — about being introduced to people, places and things that an audience may or may not have had access to previously. In Janet Langhart Cohen’s play, Anne & Emmett, this notion of imagination and introduction paves the way for a stirring play about intolerance and two people from decidedly different backgrounds who discover that they share a lot more in common than they or the audience could ever imagine.

Presented by the African American Performing Arts Community Theatre, Inc., in Miami’s African Heritage Cultural Arts Center, Anne & Emmett is an emotion-filled story about Anne Frank, a 15-year-old Jewish girl whose diary created a historical document and a first person point of view of the Holocaust, and Emmett Till, a 14-year-old African-American boy who was murdered in Mississippi for whistling at a white woman, an incident that mobilized the American civil rights movement.

The play opens in low light. A recognizable voice begins: “Imagine if Anne and Emmett met in a place called Memory,” booms a Morgan Freeman voiceover. Before the teens can be imagined together, the audience must first learn a bit about their stories. On one side of the stage is a small kitchen. A mother packs a suitcase. Her son, Emmett (Shawn Burgess) enters with boundless energy. He’s taking a trip; leaving Chicago to visit cousins in Mississippi. Mamie Till warns her son about the “rules” of being black in the South in 1955. Emmett embarks on his journey.

On the opposite side of the stage, a young girl sits at a writing desk. Anne (Zasha Shary) has a similar conversation to Emmett’s. She longs to go outside and ride her bicycle. Her father scolds her, explaining to her why they must be quiet. The Nazis are going door to door looking for Jews. They will be separated and taken away if their hiding place is uncovered. It is after they are discovered that Anne ends up at a different writing desk center stage. Soon after, Emmett arrives bewildered, wondering who the girl is and how he arrived. “In memory there is only the truth,” Anne tells her new friend.

As the 90-minute play unspools, the two teenagers take on some heavy topics, telling each other the stories of how they met their fates. Every once in a while, Langhart Cohen shows a glimpse of their youth — Emmett carries around a photo in his pocket of movie star, Hedy Lamarr; he tells Anne it is his girlfriend. They tease each other, playfully. There’s no hint of racism or prejudice here.

In the telling of their stories, Langhart Cohen creates a reason for the two of them to coexist, despite Anne Frank’s death 10 years before Emmett Till’s and in another part of the world. But through these personal stories, Langhart Cohen allows the audience to experience the emotions behind history-book stories of intolerance. (Ironically, in 2009, a few hours before the play was to debut at the United States Holocaust Memorial Museum in Washington, D.C., a committed white supremacist walked into the museum and shot an African-American security officer.)

Burgess as Emmett is the standout here.  He’s likeable, adding a bit of adolescent swagger to the boy who hoped to grow up to be a comedian or a motorcycle policeman. His awestruck innocence is infectious when he closes his eyes to take us through a bit of modern Black History, “a woman on a bus is thinking about me?” he says about Rosa Parks. Then there’s Dr. Martin Luther King Jr., and Barack Obama: “A black man in the White House?,” he says with pride.

Shary’s Anne Frank is solid as a rock, smart as a whip, and as determined as one might imagine this heroine to be. Her overwhelming emotion at the horror of Emmett’s story is heart-wrenching and real. Shary is making her theatrical debut in the production (she’s been seen on Telemundo and Telefutura) and does a fine job. However, her speech is inflected with a natural accent, which can be distracting since it strays so far from the roots of the character.

Kandace Crystal as Mamie, Emmett’s mother, and Sheldon Cohen as Otto, Anne’s father, are given explanatory speeches that bring the audience back to reality, signaling the end of the memory play. Otto’s speech is by far the most dramatic; Cohen, in prison stripes and sitting in a barbed wire cell, delivers a soliloquy that raises the roof, displaying Otto’s frustration and longing. Crystal, too, shows a mother’s defiance at injustice, and her cool delivery is just as fetching. Tommy O’Brien as the man responsible for Emmett’s murder amps up his short speech with an edgy, no remorse attitude that oozes hatred.

Dudley Pinder’s set, with its different levels and farmhouse touches, is comfortable in the Cultural Arts Center’s small space and adds to the play’s historical backdrop.
Director Teddy Harrell, Jr. lets Langhart Cohen’s piece speak for itself, adding staging that creates wonderfully framed pictures to the thoughtful script —  this imagined crossing of paths.

AAPACT’s Anne & Emmett is a beautifully constructed portrait of two young heroes who, unbeknownst to them, made a world of difference.