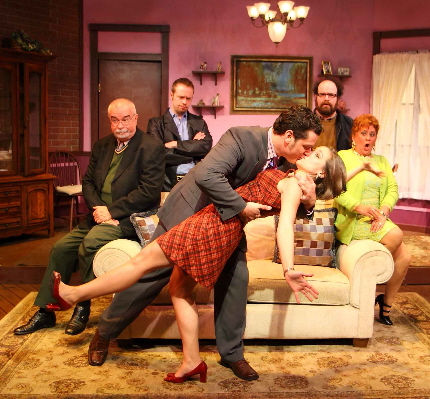 Beau Jest has been around so long that that even the Internet has trouble dating exactly when it was written. The uber-Jewish farce may have been the first show Ponce de Leon saw on his first visit to these shores at the Fountain Dinner Theater.

But there’s a reason, as seen in Broward Stage Door’s revival. Despite a sentimental mechanical finale and humor so vaudevillian you can hear the rim shots, James Sherman’s may be script may be formulaic but it’s also truly funny, especially when enhanced by the skills of star Matthew William Chizever and director Michael Leeds.

While anyone can appreciate the fish-out-of-water set up and the parent-adult child relationships that transcend religion and culture, it’s unavoidable that being Jewish really ratchets up your enjoyment when jokes reference Alan King and there’s a smattering of Yiddish.

Sherman made his reputation when the show ran for a year at Victory Gardens Theatre in Chicago in 1989. He later wrote a gay-themed sequel Jest a Second plus a more serious work, God of Isaac, both produced locally in the 1990s.

The story – for the 12 people over 50 who haven’t seen it – tells of a lovely young woman Sarah (Sara Fetgatter) who has invented a Jewish boyfriend, Dr. David Steinberg, to parry the pressure from her parents (Sally Bondi and Larry Kent Bramble) who disliked that she was – and secretly still is — dating a Gentile, Chris Cringle (Justin Lawrence).

Now the parents and her brother Joel (Mark Levy) want to meet David at a Friday night shabbos dinner. So she hires a stand-in, Bob (Chizever), a barely-employed actor moonlighting in an escort service for old ladies. But shortly before the family arrives, Bob acknowledges that he’s not Jewish, setting off an understandable panic in Sarah.

During the ensuing dinner and a Seder weeks later, Bob and Sarah have to dance as fast as they can to keep up the deception, although Bob’s previous roles in Fiddler on the Roof and Cabaret give him more of an edge that Sarah’s expects. And then the couple really falls in love, resetting the conundrum.

Chizever, who nailed his dramatic roles last season in GableStage’s Venus In Fur and Naked Stage’s The Turn of the Screw, is emerging as a first-rate light comedian. He hasn’t always scored in some shows, but it’s becoming clear that when he has the right director, he has an easy charm that cloaks a gently subversive wit and a wicked sense of comic timing.

The rest of the cast is pretty solid with troupers like Bondi and Bramble knowing exactly how to deliver dialogue so predictable that the audience knows what’s coming. Fetgatter is also a nice addition, investing a lovably hapless anxiety to the gatherings that seem to teeter on the brink of disaster.

But the real star is Leeds who keeps the farcical proceedings humming without seeming forced or rushed. The pacing is appropriately rapid when the madness reigns, but then slows down for Sarah and Bob’s scenes of soul-searching. He invents or allows his cast to inject scores of clever grace notes.

Bottom line, this is a fine rendition that will not do much for anyone under early retirement age, but will certainly entertain the older Jewish crowd that Stage Door made its reputation with during the 1990s.