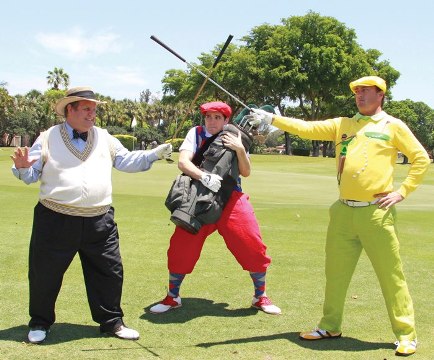 Playwright Ken Ludwig fashioned his play The Fox on the Fairway after high comedies of the 1930s and 40s — you know, Noel Coward’s Blithe Spirit, Kaufman and Hart’s You Can’t Take It With You.  And while shades of the Aldwych farces set the tone of the production now at Actors’ Playhouse, The Fox on the Fairway, plays more like a 1970s sitcom. When any one of the comedy’s exaggerated characters comes bursting through the door (and this happens more than a few times), you expect a canned laugh track to surface.

The comic play about the behind-the-scenes entanglements at a private country club has its share of hits as well as misses. Since its debut in 2010, it frequently turns up in summer repertory theater and rightly so. It’s perfect in that niche with its golf tournament setting and carefree antics. Actors’ Playhouse, using its smaller second floor space for Fox, makes sure to inject this lightweight vibe (there’s not an ounce of seriousness or suggestion to the audience to invest in these characters), but it is certainly a breezy aperitif to usher in the lighter Florida summer theater season.

Under David Arisco’s smart direction and the assemblage of a can’t-miss cast, Actors’ Playhouse has found a way to outfox this sometimes dimwitted homage. The always affable Ken Clement plays Quail Valley director Bingham, whose job and marriage are on the line over a bet with rival director, the chief of Crouching Squirrel country club, Dickie Bell, played by Todd Allen Durkin.

Durkin is absolutely dastardly as Dickie, stealing every scene he’s in with his mixed-up metaphors and a slippery tongue that seems to have a life of its own. If you’ve ever belonged to a country club, you’ve certainly run into Durkin’s Dickie. The actor also has the unmitigated pleasure of wearing some of the most hideous golf sweaters and loud golf pants ever to see the light of day (three cheers to costume designer Ellis Tillman for these gets ups and all of the delightful and spot-on costuming in Fox).

Betsy Graver (Louise) and Clay Cartland (Justin) are Ken and Barbie — young, newly engaged lovers without an ounce of smarts between them. Graver’s Louise is a sniffling, squealing, waitress at Quail Valley’s Tap Room who is at the top of her game when she spews vapid insights into goings on at the club while equating them to Homer and the “Iliad.” Obviously one of Ludwig’s favorite characters, the lines he bestows on Louise reveal the playwright’s brilliant comic writing we have revered in his other winning plays such as Lend Me A Tenor.

Cartland plays Justin to comedic crescendo, especially in a turning point scene where the audience discovers that Louise has accidentally flushed his “Granny’s” ring down the toilet. Cartland also displays some incredible feats of physical comedy, crashing through doors, falling over couches and dialing a phone with his arm hoisted in a sling.

Amy McKenna is absolutely fetching as the over-sexed Pamela Peabody, a member of Quail Valley, and Dickie Bell’s former wife. “Golf and sex are the only things you can enjoy without having to be good at it,” is a taste of the many one liners she delivers with a sly wink. Kudos to McKenna for her physical comedy prowess, too. A scene where an oyster misses her mouth and heads south through the front of her dress is an out-and-out laugh riot.

Margot Moreland is the icing on the over-the-top cake as Muriel, the oppressive wife of Bingham and owner of Ye Olde Crock antiques store. Moreland’s comic timing, especially during her surprise entrance, is priceless.

Arisco and Actors’ Playhouse have taken on a challenge with The Fox on the Fairway (the title is never really explained; my bet is it is left to the audience to decide which cad or dame is the fox on the fairway). Ludwig calls for the cast to create Herculean feats of Marx Brothers mayhem: lots of running through doors, leaps across the set and over furniture. There are mixed-up stories of mistaken identities, and plenty of bad puns (more than a few sophomoric double entendres about balls are peppered throughout), but Arisco, the cast and the production team are not only up for the task, but they rise to the occasion.

The Fox on the Fairway won’t take the World Cup when it comes to comedy, but it’s a fun romp and summer fare that only requires the audience to be swept away in its lunacy.

2 Responses to Actors’ Playhouse Outwits Dimwitted Fox on the Fairway