Measure for Measure Delivers A Rousing ‘In the Heights’ 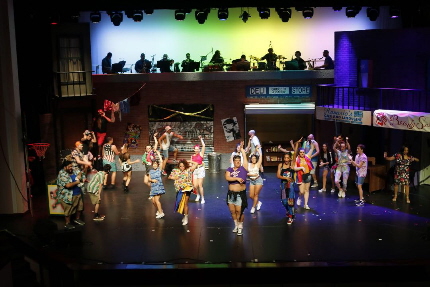 The cast of Measure For Measure Theatre’s In The Heights / Photos by Kiaa Janell.

By Bill Hirschman Anyone attending much theater over the past decade knows that In The Heights is a joyful snapshot of modern barrio life, powered by infectious music, alternately intricate and moving lyrics, and explosions of dancing.

But Measure For Measure Theatre’s rousing production in Sunrise brings into focus that Lin-Manuel Miranda and Quiara Alegría Hudes’s musical is, at its heart, about the twin themes of dreams and community, and their intersection. With passion and ebullience, this edition documents an evolving fluid community of varied mutually supportive souls pursuing a variety of dreams.

Some of those dreams are of escape, some to find security locally, some cope with the past, most about an uncertain future, but all of them dream of finding who they are and affirming their self-worth. Once again, the lovable bodega owner Usnavi is our guide and his specific dreams are the fulcrum of the evening. But here he is no more important than Vanessa who wants a better life while coping with an alcoholic mother, or Benny who wants to open his own business, or Nina seeking a way to cope with failure, or Kevin struggling to save his taxi service to break his father’s cycle of agri-poverty, even the Piragua Guy striving to keep his pushcart business afloat against a corporate competitor. And Daniela and Sonny and Graffiti Pete and…. Although their dreams and fortunes rise, fall and mutate, their community provides a nurturing incubator for their aspirations and hopes in an engaging production notable for warm heartfelt voices from singers inhabiting characters.

The 2008 Tony-lauded musical, for those living in Antarctica for the past decade, uses a score of rap, hip-hop, salsa and Broadway ballads to chart three steamy days in the tight-knit multi-cultural Manhattan neighborhood of Washington Heights. A blackout, budding romances, death and financial vagaries ensure that no one’s life nor the community itself will be the same at the end of the long weekend.

Following fine productions of the chamber musicals Murder Ballad and Next to Normal, this young company now deftly delivers a show with 33 actors and dancers including six acting as understudies, 10 musicians, plus another 17 directors, designers, producers and staff. The economics and logistics of this as a professional production are a mystery. Artistically, major credit must go to company cofounder Daimien J. Matherson who quadruples as director, costume designer, lighting designer and scenic co-designer; musical director Ryan Crout, and choreographers Ben Solmor and Nikki Dikun, all mastering logistics far more complex than anything the company has attempted before.

Among their accomplishments is the creation of this community: a credibly broad spectrum of residents spanning age, sexual identity and most noticeably, physical types including dancers who range from rail-thin to pudgy. Everyone, even the leads, resemble the array of real people lounging outside a bodega. People in buzz cuts, dreads, emerald-tinted highlights and imaginative but credible street garb populate the stage on skateboards as women play jump rope, toughs in hoodies threaten club goers, punks try to snatch someone’s purse and people hang out on door stoops.

Matherson includes the audience by sending ensemble members into the aisles and into the balcony, so that, for example, during a nighttime memorial service, the patrons are surrounded by neighbors holding candles in the dark.

This cast is further proof that there is a cadre of talented artists out there, most of them in the 20s, that most artistic directors in our region have no idea exist —  a situation that exists at Area Stage Company in Miami and in the early days of Slow Burn Theatre. Obviously, start with their Usnavi — Spencer Landis, a recent graduate of the Maltz Jupiter Theatre’s Professional Training Program where he did the role for a conservatory production, and now takes it on in what is reportedly his first professional outing. His reed-slender Usvani is immediately engaging with a broad smile and rubber band legs. He delivers the complex lyrics with a smoothness that makes the acrobatic verbiage seem perfectly natural. His winning personality grabs the audience instantly in the opening production number and provides a center for the evening without dominating it.

Lauren Horgan creates a sexy, vibrant Vanessa trying to find a way forward from her dilemmas while still prizing the relationships she has. Stephanny Nori, who had the lead in Slow Burn’s Spring Awakening, merges the angst and anguish inside Nina in every song she caresses with a gorgeous voice. Christopher Alvarez, one of the ill-fated lovers in Murder Ballad, uses his voice and personality to portray a Benny who respects his boss but who longs for far more professionally and personally. Sophia Malfetas may be heavily made up as the abuela, but she dives deep into the emotional and moral center of the neighborhood as well as unveiling her own poignant backstory. Marisol Morales’s feisty beauty shop owner Daniela leads the show-stopping “Carnival del Barrio.” Sven Barllante is a gay hairdresser originally played on Broadway by Miami’s Janet Dacal. Credit as well the impossibly nimble Lucas Vazuez as Graffiti Pete, Ricardo Morales as Sonny, Francine Birns as the mother Camila, and Tommy Paduano as the Piragua Guy whose spirit and voice fills the auditorium.

A special shout out to longtime theater vet Larry Buzzeo who often does not get the roles or directors he deserves. But when he does get the right material, he simply shines as he does here in his fervent rendition of “Inutil (Useless),” in which Kevin Rosario agonizes over the possibility that his long hard efforts to create a new life might end up as impotent to support his family as his forefather farmers.

Much of the choreography by Solmor is electrifying. The co-founder of Marquee Theater, who was sidelined by cancer two years ago, comes roaring back with an explosion of celebration. Assistant choreographer Dikun, who also performs in the ensemble, charted five of the numbers with equal skill. Among the achievements was how Solmor, Dikun and Matherson truly filled the stage with gyrating bodies yet never made it felt like performers were being jammed in simply because they could. And when this large, large company switched from individualized moves as separate characters then suddenly move in undulating sync, that sense of community becomes an almost physical entity. While taking notes, I kept writing down the name of one dancer or another to single out. Finally, I realized that they all deserved mention. Some were knife sharp, some were amazingly agile, but every last one had an enthusiasm. Then I realized that extended to even the non-dancing or barely dancing ensemble members. So worthy of a bow on their own are, take a breath, Josh Bramkamp, Neena Caperna, Amanda Corbett, Silas Antonio Escalante, Jennifer Fain, Eduardo Fernandez, Santiago Garza, Luis Gomez, Sara Elizabeth Grant, T. Brandon Hall, Maria Incorvaia, aaron Kurzweil, Cato Marlowe, Isidora Miranda, Daniel Nohrden, Cat Pagano, Genesis Perez, Samantha Villaroel, Frances Weissler and dance captain Precious West.

The production isn’t perfect. Many lyric lines get lost in the flow, so – like Hamilton – it really helps if you listen to the original cast album first or at least scan the plot on Wikipedia before coming to the theater. The lighting is admirable using the civic center’s equipment but some actors don’t know where the light is so they can stand in it. The sound is beautifully balanced in the first act but it’s so loud in the second act that it’s hard to hear the singing sometimes.

The peripatetic company is now headquartered in the Sunrise Civic Center, which is listed as a “producing partner” and provides a top flight sound and lighting system and nearly 300 comfortable seats including a balcony. The work here should make theater patrons look forward to its regional premiere of Island Song in March and Pippin in April.