Broward Stage Door’s Damn Yankees Is Just A Base Hit 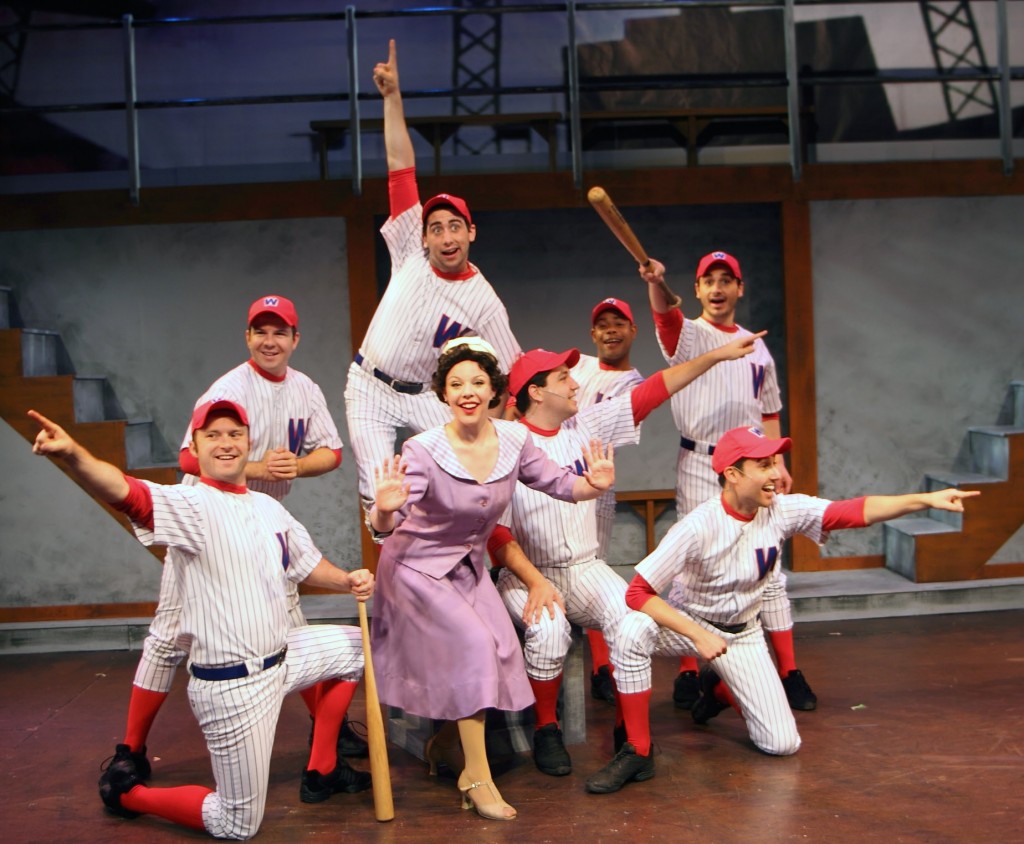 The team celebrates the addition of Shoeless Joe From Hannibal, Mo.

It’s not hard to overhear Broward Stage Door audience members at intermission openly proclaim that they’re not anxious to see much written after Nixon was president. Fortunately, that dovetails with producer Derelle Bunn’s commitment to preserving the classic American musical art form for current and future generations.

So give props to Bunn and co-founder David Torres for mounting professional productions of deserving titles that only get revived locally by amateur companies with their variable production values and talent.

Such is their choice of 1955’s Damn Yankees, a well-crafted light entertainment that transposes the Faust legend to the Eisenhower Era when baseball was the national sport.

But with the upfront caveat that we saw an early preview, this production is a base hit but no triple. The cast needs to pitch with a little more spin on the ball, even with talent in the dugout plus a delightful score that qualifies as a solid run batted in.

Damn Yankees was based on a satirical novel The Year The Yankees Lost The Pennant by Douglass Wallop. It reunited co-producer Hal Prince, director–book writer George Abbott and songwriters Richard Adler and Jerry Ross, all of whom has just had a hit with The Pajama Game one year earlier.

The premise was that Joe Boyd, a rabid fan of the Washington Senators (imagine those words in the same sentence today), sells his soul to Mr. Applegate so that his beloved nine will beat the invincible team of the title for the league pennant. Applegate’s brainstorm is to transform the aging creaky Boyd into Joe Hardy, a hunky young slugger who can lead the comeback effort. When Hardy begins to balk and thinks about exercising an escape clause to return to his beloved wife, Applegate sends for his chief seductress and home wrecker Lola. The wry script by Abbott, Wallop and allegedly Pajama Game’s Richard Bissell was reworked some by director Jack O’Brien for a 1994 revival, but the underlying premise remained the same.

The show’s chief virtues are that score and dance numbers including the peppy standard “You’ve Gotta Have Heart,” the roof-raising “Shoeless Joe from Hannibal, Mo.,”  the vaudeville song and dance “Those Were The Good Old Days,” the heartfelt ballad “A Man Doesn’t Know” and the Latin-infused “Who’s Got The Pain?” And for those that appreciate it, there’s a locker room scene with a lightning flash of bare bottoms.

Director Dan Kelley once again has cast some talented singers, but with one exception, the acting is pretty pedestrian and unpersuasive.

That exception is Matthew William Chizever as the satanic visitor, although even he was a bit disappointing. Chizever just came off two strong performances in The Turn of The Screw for Naked Stage and Venus in Fur for GableStage. Again, we stress that we saw a preview and Chizever delivered the role with a delicious grin of someone who enjoys his infernal work. But his Applegate felt muted as if Kelley told him to not to go too far over the top. True, Applegate shouldn’t be a cartoon, but we know Chizever can deliver the more scenery-chewing lip-smacking relish at his evildoings because we saw him do it last season in Stage Door’s Little Shop of Horrors.

Regan Featherstone (Freddy from Stage Door’s mediocre My Fair Lady) sings strongly and fervently as Joe Hardy. The role as written has always been a bit of white bread cipher so it really needs an actor with an impossible charisma while Joe remains reminiscent of the clean cut boy next door – a challenge that has defeated almost everyone who has taken on the role including Tab Hunter in the film version. Featherstone doesn’t bring that extra English to his acting, but he sings the ballads with appropriate brio, and that’s enough.

Sabra Michelle, with her elfin features and gamin build, is an adequate singer-dancer as Lola. But she doesn’t generate much sexual heat, and as Gwen Verdon and others have proven, sexual heat is the defining element of the star-making part.

Mark A. Harmon doesn’t get a lot of stage time as the middle-aged fan Joe, but his baritone touches the heart with his bittersweet love ballads, “Goodbye Old Girl” and “A Man Doesn’t Know.”

Elizabeth Sackett has a lovely affecting voice as Joe’s unbelievably loyal and trusting wife, Meg, and Allison Maldonado – who leads the Shoeless Joe number — also is satisfactory as the sports reporter who exposes Joe. What makes no sense is why first she’s a booster for the team, then she betrays them and then in the final scenes, the team members take her back into their good graces.

Jack Livesey has been Stage Door’s comic song-and-dance supporting actor in several shows such as Sugar and The Hot Mikado. His persona doesn’t change much from show to show, but it’s a pretty good fit for the perpetually hopeful coach of the perpetually losing team.

Kelley long ago proved that he knows how to mount a musical, but his staging of Stage Door’s recent Showboat felt by-the-numbers and his Damn Yankees is only a few cuts better. For instance, in the scene where the physical Joe Hardy and the spirit of Joe Boyd sing a duet about their love for Meg in “Near To You,” you’d almost insist that the two Joes, being halves of the same person, would stand next to each other and even switch positions for emphasis. Here, Kelley just lines them up, Meg at one side of the stage, Joe Hardy in the middle, and Joe Boyd at the other end of the stage.

The choreography here by Rocky Duvall is admirably energetic, by turns athletic and slinky, although it looks a whole lot, and we mean a whole lot, like the original work by Bob Fosse. Maybe it’s meant to be an homage.

One last time, we saw a preview, but this mildly entertaining production seemed to need some steroids.