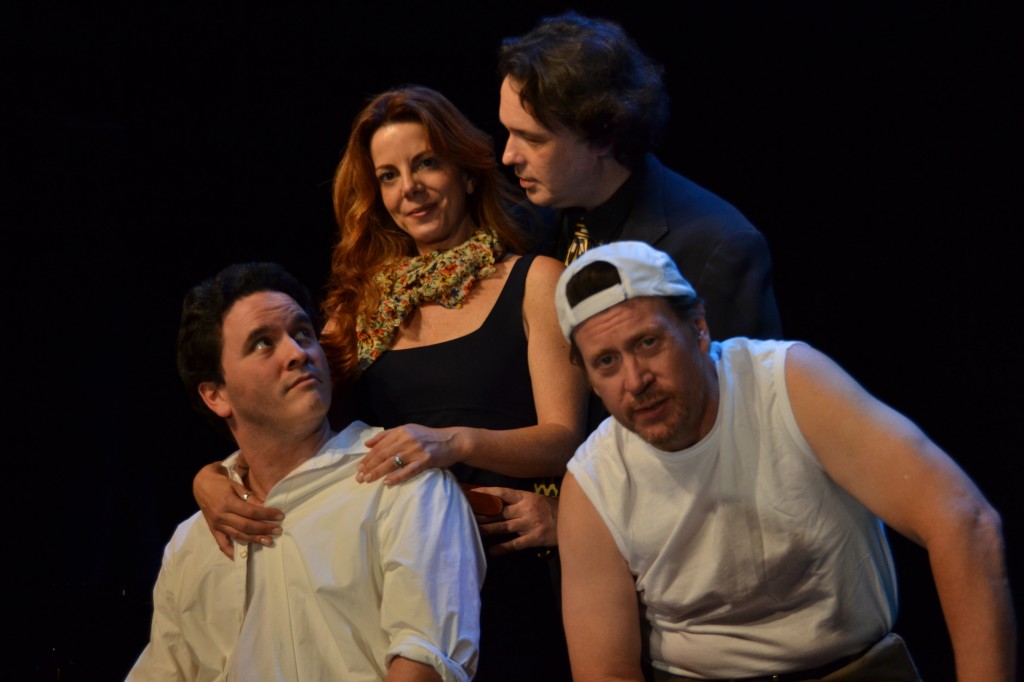 Israel Horovitz’s Gloucester Blue, getting a gleefully mischievous world premiere at the Arts Garage, is a black comedy with all three Aristotelian verities – beer, blackmail and blood.

The internationally honored playwright has penned an offbeat tale rooted in blue collar rage against the one-percenters as two workmen and two Brahmins interact in wildly varying ways that will leave dead bodies in their wake.

The script and the production have a few minor shortcomings, but Artistic Director Louis Tyrrell and a quartet of actors comfortably inhabit Horovitz’s eccentric meld of sex, sin and satire.

The set up posits that contractor Stumpy (David Sirois) is refurbishing a room in an abandoned fish cannery soon to be used as a summer home for an uppercrust married couple in Horovitz’s favorite haunt of Gloucester, Mass.  Stumpy has hired friend-of-a-friend Latham (Steve Anthony) to help him meet an impending deadline because the couple wants to move in quickly.

They trade get-acquainted banter while they spread spackle and plaster on the walls, but it becomes clear that they are an odd couple: Stumpy is a bit more polished with a preference for National Public Radio while Latham’s taste in music runs to Aerosmith.

LATHAM: NPR brings me down. I’ve got enough problems of my own.
STUMPY: I see what you’re sayin’. NPR can be depressing.
LATHAM: Wck’id depressin’. African nations. Flooding. Economic distress. Sad shit like that.
STUMPY: That’s true. “All Things Considered” can bring you down.
LATHAM: NPR can make ice cream sound depressing.

But nothing is what it seems. Both have topics of inquiry that they sidestep. And if Latham comes across as a Budweiser-swilling Neanderthal, very little is said that escapes his notice.

Tensions ratchet up when one of their employers arrives, Lexi (Andrea Conte), a lovely patrician bringing by paint samples including a shade called Gloucester Blue. Almost immediately, the class warfare warriors Latham and Lexi strafe each other with repartee while glaring across the room as Stumpy tries to defuse what seems headed for something ugly.

Latham is at first cautious because he wants to keep the job. But once he thinks he has the upper hand, he relishes taunting his prey. When Lexi complains about someone sexually harassing her earlier, Latham responds, “I remember when harass was two words,” reveling in the crassness of the pun.

Secrets begin to tumble out including that Lexi and Stumpy are having an affair,  which eventually leads them into an adjacent bedroom while Latham works. When her husband, the ineffectual Bummy (Michael St. Pierre) arrives, he can’t avoid acknowledging that the couple are coupling. From there, the plot twists in delightfully ridiculous ways that meld sex and murder.

While there are some flashes of pragmatic philosophy uttered , this comes across a kind of comedy that Hitchcock loved without any pretension to delving into “big issues.”

Tyrrell has molded the cast into a smoothly operating collection of characters that veer really close but don’t quite tumble into caricature.  He has physically cast well: Latham’s strapping scruffy good looks, Stumpy’s handsome guy next door who just wants to get along, Bummy’s slightly doughy physique, and the lovely Lexi’s ravishing red hair flowing down her back and slightly upturned nose. Vocally, too, the two workmen deliver a consistent Massachusetts accents that sounded convincing to Floridians’ ears, plus a more refined sound for a married couple born with platinum spoons in their mouths.

Besides choreographing movement and overall pacing, Tyrrell seems to be conducting contrapuntal aural duets as characters probe, duel and spar in such a way that the play is credible whether the tone is humorous, threatening or both.

One quite funny tactic occurs when characters take an extra beat in the middle of a propulsive scene, a sort of half-slow burn. At least twice, a character realizes that another character’s misunderstanding provides an escape hatch to a dilemma. You can actually see the opportunity sink into the plotter’s brain in that half second as if they were yanked back by a chain.  In another instance, Conte’s Lexi is nattering to the ether about a fly infestation when she references “a Steinbeck novel” and her eyes fall on Latham. She takes just a half-beat and a half-smile, realizing that he has no idea what she is talking about — and then she plunges back into the story.

The ensemble is dead solid from Sirois who invests Stumpy with an up-and-comer’s hope for something better to St. Pierre’s hapless husband inept in dealing with the real world. Conte is an experienced actress who hasn’t been cast down here frequently, but she perfectly slides into Lexi’s sense of entitlement that is so natural that it’s barely snobbery.

But Anthony is the standout as the scruffy, blunt force trauma of a human being whose native intelligence is masked by a persona of someone who drains a beer can and tosses it over his shoulder. Whether he is antagonizing Lexi or chummily putting his arm around Bummy as he threatens him, Anthony’s Latham revels in sticking it to those who laze about in a life of unearned privilege.

Language is a major element in Horovitz’s work and here he demonstrates his skill at creating a heightened language that still sounds like eavesdropping on real people. At the same time, using prosaic vocabulary, he injects a few philosophical musings such as Latham’s “You can paint over and paint over, cover stuff up, but what is is. Underneath it all, it’s still what it always was. Nothin’ changes.”

Horovitz has lived and operated a theater company for decades in Gloucester. So his characters speak in the patois of the region with such phrases as “You yanking my daisy?” and “He would have muckled you” and using the word “wicked” as a ubiquitous adjective.

A few false notes clang. Early on, Stumpy and Lexi repeatedly fondle each other in a way that Latham couldn’t possible fail to notice.  Additionally, although the play is only 75 minutes – interrupted by an intermission yet – the first 20 minutes languorously depict the get acquainted banter of the men. That could be slimmed down a little bit.

One device simply does not work. Repeatedly, when a character balks at revealing a dark secret or faces some crisis, the audience is assaulted with a digital age version of an ominous organ chord that underscored a key moment in an old-time melodrama. Horovitz wrote in his script, “In my mind, it is important to use musical underscoring to lift the play slightly off the ground and let the audience know, early on, that the play is something other than traditional realism.”  But, really, the “music” by Horovitz’s son Adam, better known as a member of The Beastie Boys, is needless and distracting.

The intelligence and quality of this and the previous productions in Arts Garage’s short tenure should not be a surprise considering Tyrrell’s artistic pedigree for doing new and edgy works at Florida Stage. His work there with Horovitz on Sins of the Mother in 2010 encouraged the playwright to bring Tyrrell this script. With Gloucester Blue, this fledgling company under a Delray Beach parking garage cements its promise as theatrical force to watch.