Posted on February 9, 2014 by Bill Hirschman 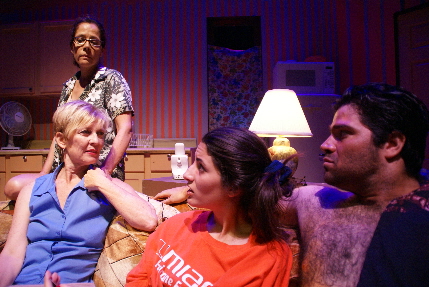 Until the final scene, it’s not terribly clear what New Theatre’s intriguing Visiting Hours is about or what it’s trying to say – and then the ideas come at you so fast that it takes a while afterward to sort out what playwright David Caudle has been setting up all  night.

A bit of clarity arrives in the heat of an argument when one half of a lesbian couple asks her partner, “Is love a consistent lie?” Caudle’s answer seems to be “yes” — we manipulate and tells lies to the people we love to preserve their peace of mind and the stability of the prized relationship itself.

Before that, it’s a bit difficult to suss out the unifying thread. Fortunately, the production led by director Margaret M. Ledford is consistently engaging and Caudle’s characters are absorbing enough to keep your attention.

Open-hearted Marian (Barbara Sloan) and wary Beth (Madelin Marchant) have been in a loving relationship for 20 years in Coral Gables, a reliable yin-and-yang of personalities and strengths. Together, they have raised a son, Paul (Alex Alvarez), the result of Marian’s disastrous marriage. Two years ago, Paul disappeared after the couple used the last of their credit lines to pay off his  debts from addictive gambling. They have spent most weekends searching for him.

Today, Paul’s ditzoid girlfriend Shelly (Maria Corina Ramirez) shows up seeking bail because Paul has been arrested for attacking a landlord who took his deposit and refused to rent to him. Marian wants to run to his side, but Beth – protective of her lover – strongly presses for caution. It doesn’t help that Shelly is not just nuts, but a lying opportunistic user. Just as skeptical is the blowsy boozy Nat (Kitt Marsh), an older well-heeled lesbian who took the couple under her wing and gave them a garage apartment rent-free when Paul wiped out their savings.

Without consulting Beth, Marian puts up their car as collateral for a bond and springs her son. Paul has spun her a hard-luck story that doesn’t answer a lot of questions. Once he and Shelly crash in the apartment, he becomes alternately sullen and borderline violent – until it’s not so borderline anymore.

At one point, someone yells, ‘why is he this way?’ to which I yelled silently in my mind, ‘Yeah, why?’ We actually don’t get much of an answer other than he’s just a bad seed. But Caudle is more interested in Paul as a catalyst for the kind of deceptions that fuel long-term relationships. His presence reveals a raft of manipulations and lies and cover-ups among all of the characters, most of them benign and altruistic that provide the lubrication for the long-term relationships. That raises interesting questions after the final curtain about how “true” a relationship is that is based on lies, or whether they are essential to continuing relationships.

Caudle sets the play in Coral Gables and laces the script with lots of Florida references like Coral Castle and CocoWalk that will mean nothing to folks in Atlanta or Los Angeles, but give it a verisimilitude.

Ledford is one of the region’s best directors and she has worked hard to make this show land well with a competent cast.

Sloan, the New Theatre veteran with a dozen terrific performances on her resume, deserves credit for making Marian’s unconditional love of Paul nearly credible. Certainly Caudle’s creation reflects some parents’ blindness, but Paul’s callousness and cruelty makes Marian’s Pollyanna denial very close to implausible and only Sloan makes this work although you want to shake Marian for being such a pitiful dishrag.

Marchant effectively communicates that the no-nonsense Beth is cool-headed but that she is fiercely protective of Marian, who frankly needs protecting. Marchant’s Beth has seen too much emotional betrayal in the world outside not to be on guard.

In real life, Alvarez is an amiable guy and he’s got quite a range (the flamboyant cousin in GableStage’s The Motherf**ker With The Hat). But the husky muscular actor has been building a reputation for reliably portraying nasty, intimidating and violent characters. Paul adds to the list. Alvarez fearlessly accepts that Paul is an absolute heartless bastard. But there’s also a bit of charismatic likability that makes Paul’s eventual meltdown a bit jarring.

Playing quirky, mercurial and crazy is fun but also a difficult challenge; Ramirez pulls it off. Looking a lot like Penelope Cruz, Ramirez’s 20-something Shelly is not just a bit unhinged, but simultaneously an experienced hustler with a street pragmatism that knows no boundaries whatsoever. It contains echoes of the uninhibited girlfriend she portrayed for New Theatre in Robert Caisley’s Happy in 2012.

Marsh creates a hard-boiled exterior protecting a remarkably fragile ego as someone who starts drinking in the morning to get through the day. She’s got a nice topspin for sharp remarks such as “I like pleasure; it’s what it’s cracked up to be.”

Sam Deshauteurs’ lighting changed regularly as emotions ebbed and flowed, but actors often ended up in dark spots on the stage.

This is the first production in New Theatre’s new home in the Lab Theater at South Miami-Dade Cultural Arts Center, a new facility in Cutler Bay. The room gives the company the most space it has ever had in its history plus more equipment than ever before.

The space is lovely with plenty of parking (although on busy nights, you park across the street in the empty lot of a mall). The large glass structure facility is easy to find, two blocks west of exit 11 on the Turnpike. But it’s a long haul from New Theatre’s traditional audience in Coral Gables and a serious trek from central Broward County (50 minutes off peak and 100 minutes during rush hour).