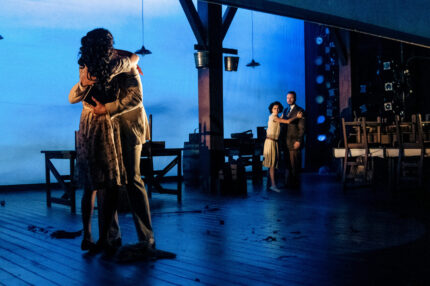 Literature, as much, if not more, than any art form, illuminates our lives, to use a carefully chosen verb.

It enables us to see ourselves and everything around us more clearly. It exposes truths and secrets we may not have been aware about ourselves, and to varying degrees changes us in the wake of those reflected images and recognizable echoes.

Which, of course, can be said about theater, as is underscored by Miami New Drama’s triumphant 20-year-anniversary production of Nilo Cruz’s Pulitzer-winning Anna in the Tropics.

In this case, the reading aloud of Anna Karenina by a lector in a cigar rolling factory in 1929 awakens and inflames a Cuban-American family dealing with the same kind of sexual attraction, marital infidelity and intense but banked angst as Leo Tolstoy’s trio of protagonists.

In both, the specter of tragedy grows during the arc of the journey until death closes both.

This superb production of an oft-revived piece benefits immeasurably from the Miami-based playwright directing the drama himself once again – a risk that doesn’t always pay off when the playwright is the director.

The success here may be in part because of a supremely adept cast, but just as clearly because Cruz has helped them infuse the crucial current of pain and passion shimmering from underneath even the most prosaic dialogue – something other productions don’t always achieve.

But alongside that prosaic dialogue, Cruz has gifted every character with gorgeous flights of near poetry. Laudable – and rare in productions of Cruz’s work – is how here he makes this imagery absolutely credible coming out of the mouths of “everyday characters.” No matter how glorious, how lushly poetic Cruz’s verbiage, it finds a comfortable home in the delivery of cast members whose ability to smoothly slip into flights of lyrical poesy seems simply the playwright’s affirmation of the beauty inside all human beings.

Or when taciturn colleague Cheché reveals internal agony over his wife’s betrayal. “Ever since she left me I’m not the same. Something is missing. Have you ever seen the tail of a lizard when it’s been cut off? The tail twists and moves from side to side like a worm that has been removed from the soil. The thing moves on its own, like a nerve that still has life and it’s looking for the rest of the body that has been slashed away.”

The play is set in Ybor City near Tampa in 1929 as the cigar rolling industry was on the cusp of becoming mechanized, a sea change that Cheché champions as inevitable and profitable, but that the rest of family not only resists but instead creates a new brand of cigar.

Unlike his predecessors, Juan Julian is a handsome and sensual man, which has an effect on the lovely older daughter Conchita (Hannia Guillen). Her marriage to factory worker Palomo (Brandon Espinoiza) is disintegrating due in part to him having a series of affairs. The young dreamy daughter Marela (Andrea Ferro) is enraptured by the lector’s reading and looks. Especially antagonistic is Cheché (Daniel Capote) whose wife left him for a prior lector.

Juan Julian’s book choice is the classic Anna Karenina. Tolstoy’s tale of a troubled marriage and passionate infidelity echo deeply inside the lives of the extended family. He becomes a catalyst in the evolution all of the relationships, including starting a re-energizing affair with troubled Conchita. Tragedy is inevitable.

Cruz’s script and direction weave sensuality, sex and desire as key motivations throughout the story, and the onstage couplings and an attempted sexual assault were overseen by Intimacy Director Samantha Pazos.

(Note: The Miami-Dade public school district in September cancelled plans to bus high school juniors and seniors to see special performances of the play. Some of the concerns “have been dealt with” and three groups of public school students and one audience of students from private schools will see the play.)

Cruz has directed this play and others, resulting in a well-developed skill at staging when and where the characters stand or move to subtly accentuate the relationships.

But he has full collaborative partners in this cast, each and every one disappearing inside not just the exterior of these characters but in the river of intensity flowing beneath the dialogue. It’s really unfair to single out anyone in this outstanding ensemble, but Salgado – the young local actor whose work over the past 15 months has been stunning — is terrific as the lector. His Juan Julian voice savors every phrase with an almost seductive delivery, certainly with a deep pleasure in the depth and power of words

Miami New Drama usually delivers fine production values, but those here are exemplary. Arnulfo Maldonado’s set is primarily the work room of the factory with its perch for the lector, heavy wooden timbers holding up the unseen roof lined with drying tobacco leaves and a huge company logo on the slats of the wood floor. Along with translucent drapes, the scene changes and the mood changes are amplified by Yuki Nakase Link’s evocative lighting. Echoing their divided angst, characters wrestling with emotions often are seen with half their faces in bright light and the other half in shade.

The play was commissioned and debuted by the now-closed New Theatre in Coral Gables in 2002, won the Steinberg/American Theatre Critics Association Award soon after and then the 2003 Pulitzer for drama, making Cruz the first Hispanic man to win the honor. Cruz has written and continues to author many other plays, an opera libretto and is now the artistic director at Arca Images, a small bi-lingual theater in Miami. But it is Anna that has been produced around the country and around the world. Cruz said this weekend that he had tweaked it a bit and emphasized different aspects for this production.

We saw the adequate 2003 Broadway run starring Jimmy Smits and Priscilla Lopez and directed by the brilliant Emily Mann – but Cruz’s powerful, exquisite Miami New Drama production here drives that one out of memory. 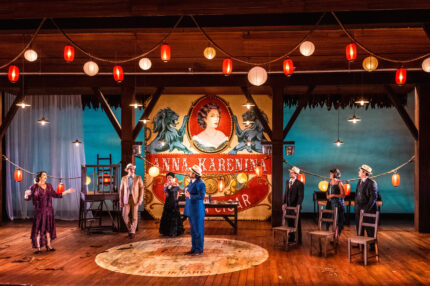