“Disaster!” Is Anything But 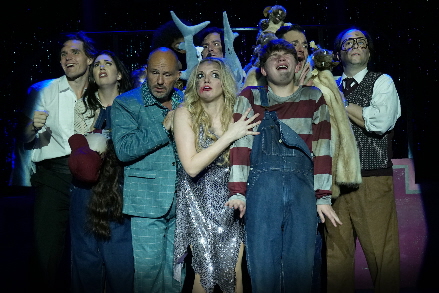 There has to be a morning after for at least some of the cast in Slow Burn Theatre’s Disaster! / Photo by Rodrigo Balfanz

It is not well-known that the defining classic text about the nature of theater, Aristotle’s Poetics, defines the genres of theater as “comedy,” “tragedy” and “a hoot.”

That last term, which has its origin in the ancient Greek word “hootenanny,” is the most amorphous of Aristotelian terms, but its definition can be illustrated with absolute clarity in Slow Burn Theatre Company’s hilarious spoof Disaster! (the use of the exclamation point first dictated by Aristophanes).

If you are a Boomer (and be warned, maybe only if you’re a Boomer or their progeny), this show will be in contention for one of the silliest, stupidest and downright funniest nights you have had in theater in recent years.

The musical melds kitschy movies of the ’70s (The Poseidon Adventure, Earthquake and The Towering Inferno) with a catalog of 34 radio hits of the ’70s and ’80s. The Barracuda, a floating casino, is holding a gala opening at a New York City pier with a cast of stereotypes drawn from those films, but shortcuts in construction and an impending earthquake are about to spell… well, you know.

Conceivers and bookwriters Seth Rudetzky, perhaps the most well-known show queen of the decade, Jack Plotnick and Drew Geraci lovingly harpoon the genre tropes with more skill than may be apparent. It may seem sophomoric like low grade Monty Python or Saturday Night Live, but it’s actually very well observed satire.

For instance, just as in any Lerner & Loewe musical, characters suddenly break into song when mere dialogue cannot adequately convey their feelings (per Oscar Hammerstein’s dictum) —except in this case they break into “Reunited” or “Without You.”

The choices range from disco’s “Hot Stuff” (referring also to the lava under the impending earthquake) to, we’re not making this up, Michael Jackson’s god awful film love song to a rat, “Ben.”  That last is a good example of how the bookwriters cleverly retrofitted their plot and characters to fit a song clearly chosen for its kitsch quotient.

The inventiveness of how they use “Hooked On A Feeling” (Blue Swede’s not B.J. Thomas’) is equaled only by the bizarre hilarity of how they employ (we won’t spoil it here) “Three Times A Lady” in a way Lionel Richie never envisioned.

And of course, whether you hate it or just despise it, no period pastiche worthy of the name could omit “Feelings.” About the only song lyric missing is “There has to be a morning after.”

Spelling these out on paper inaccurately makes them sound like something you’d groan at like a childish bad pun. What makes them land, each and every dumb sophomoric one, is the way the cast spins on the proverbial dime out of a dialogue scene and seamlessly into the inane song selection as if the choice made perfect sense to the characters in the middle of the crisis like “I Will Survive.”

Again, your enjoyment increases exponentially with your age. Opening night audiences members who grew up on the AM and FM radio pop charts often broke into laughter after two bars of instrumental lead-ins, instantly knowing what the song would be and how its use in the show is so radically different than how it was originally meant.

One of Slow Burn’s strengths is casting local actors with clarion voices who also throw themselves completely into their parts, an essential quality when the characters cannot acknowledge the lame foolishness of what they are singing.

Jeanine Gangloff is the lounge singer in love with sleazy casino owner Ben Sandomir. Her identical son and daughter are both played by Blake Ferrante, who wears a baseball cap with long hair attached so he can instantly shuttle between roles. Clay Cartland is the Tony Manero-like waiter who has broken up with the New York Times reporter Leah Sessa investigating the lack of fire doors or any other safety device. Her medley of the conflicting “I Am Woman” and “That’s The Way I Always Heard It Should Be” showcases both her singing chops and the show’s wackiness.

Chris Alvarez is the show’s equivalent of Star Trek’s doomed red-shirted crewman. Matthew Korinko is the tweedy scientist warning of disaster. Deidra Grace is down on her luck disco diva whose solos likely drowned out the opera Salome playing next door. Michael Kreutz and Kaitlyn O’Neill stand in for Jack Albertson and Shelley Winters as the older coupled on an ill-fated vacation but taking a break to sing “Still The One.”

Separate mention is due Margot Moreland as the de rigeur singing nun, except this one is battling a gambling addiction and stops the show with her paean to a slot machine, “Never Can Say Goodbye.”

If you did not see the show in New York in 2016 where it got a Tony nomination or earlier off-Broadway, it’s impossible to know how much director Patrick Fitzwater, who succeeded with the similar Xanadu, invented himself, took suggestions from the cast or borrowed from the original production. But he embraces the intended uninhibited daffiness down solidly.

Normally, recorded music tracks are a mixed blessing/curse. But here, recapturing the very varied sounds of the original charts is crucial. So the show is lifted immeasurably by Manny Schvartzman’s electronic recreations subtly re-tailored to the needs of the production. Similarly, musical director Michael Ursua molds this cast, barely old enough to have heard these songs on their parents’ car radio, to come as close to their original delivery as anyone can ask.

Once again, sound designer/operator Rich Szczublewski proves that the sonically-challenged Abdo New River Room, a small banquet hall doubling as a cabaret, can be mastered. Rick Pena provides a wardrobe of polyester duds that you hope no one finds in the back of your closet. A nod is due to stage manager Jackie Lawlor who coordinates the split-second cues for Thomas Shorrock’s lighting and the intricate music tracks.

If you’re of a different age group, you might find Disaster! just silly. But for those with a good if failing memory of the era, this hoot is a hit.

(Note: If a performance sells out or you can’t make this initially, the production moves to the Aventura Arts & Cultural Center and the South Miami-Dade Cultural Arts Center.)

Disaster! runs through Feb. 18 at the Broward Center for the Performing Arts, 201 SW Fifth Avenue, Fort Lauderdale, in the Abdo New River Room.. Performances are 7:30 Thursdays through Saturdays. Matinees at 2 p.m. on Saturdays, and 1 p.m. and 6 p.m. on Sundays. The show’s co-creator Seth Rudetsky will host a post-show Q&A on Feb.15 only. Running time is 2 hours 10 minutes with one intermission. Tickets $20-$45. Call 954-462-0222 or www.browardcenter.org. The musical then moves to the Aventura Arts & Cultural Center Feb. 22 25.Tickets at aventuracenter.org or 877.311.7469, then it moves to the South Miami-Dade Cultural Arts Cenner March 2-4. Check http://www.smdcac.org/